Welcome to another Top Ten Things, here at Enuffa.com, where I rank stuff in some kind of order, fully aware that my opinion really has no effect on the universe as we know it.  Today, in honor of having just had my face melted off by this band in concert (for the second time), I'm counting down my favorite tunes by Swedish metal band Avatar! 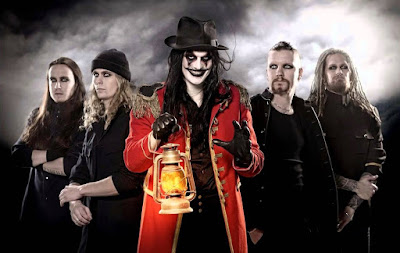 If you've never checked out this vastly entertaining quintet (and you should), their music ranges from melodic death metal to groove metal to orchestral to AC/DC-influenced blues-rock, but it's all done with a darkly caustic sense of humor.  From a technical standpoint the band is tight as a pair of spandex leggings, and they're led by one of the most captivating, sardonically entertaining frontmen to come down the pike in a long time.  Johannes Eckerstrom is positively magnetic on stage, sporting circus ringmaster garb and Norwegian Black Metal-style corpsepaint, his between-songs banter a morbidly comic nod to such figures as The Joker and Marilyn Manson.  Eckerstrom's maniacal antics drive the stage show, while his four bandmates hurl basketball-size gobs of molten heavy metal at the delighted crowds.  "Would you all bleed for me," he asks?  "YEESSS!" the audience eagerly shouts.  "Oh, don't do that, that's sick..." he replies.  If you like your music heavy, hooky and with a tinge of biting, razor-sharp sarcasm, don't miss a chance to check out Avatar's live show.  This band will kick your ass and have you laughing at the same time.

But I digress, we're talking about their best songs.  Avatar started out as a traditional death metal band, albeit with melodic guitar riffs and harmonies, but have evolved to include numerous eclectic musical elements and styles, including Eckerstrom tempering his strident death metal howl with melodic, power metal-inspired singing.  Their detuned guitars will put a rumble in your belly, the thundering drum and bass-driven grooves will get your head bouncing, and the vocal hooks will get stuck in your head for days.  Avatar is heavy metal for people who like to have fun listening to heavy metal.

On to the Top 10 list, but first a few honorable mentions....

The nihilistic fourth track on Black Waltz has one of the album's best chorus hooks, featuring one of its most demented lyrics, "Let me cleanse my soul in napalm."  Pretty effed up thing to say if you ask me...

The somber closing track from Hail the Apocalypse, "Tower" initially takes on the tone of a comforting lullabye, but the lyrics gradually reveal the speaker's true intention, love by imprisonment.  One of their most mellow, subtly sinister tunes.


HM: A Statue of the King

The driving first single from their latest album, "A Statue of the King" is a sly, tongue-in-cheek bit of blind cultism, as the lyrics weave phallic symbolism in describing the erection of a statue to the fictional(?) ruler, with phrases like "bigger than the best one" and "they lack proper stone and rocks and balls."


HM: The King Welcomes You to Avatar Country

One of the most memorable tracks from Avatar Country is this AC/DC-esque blues rocker, an invitation to prospective new worshipers of the titular king, with Brian Johnson-style vocals and a sardonic tone.  "Lay down, embracing the earth, this is your final rebirth." 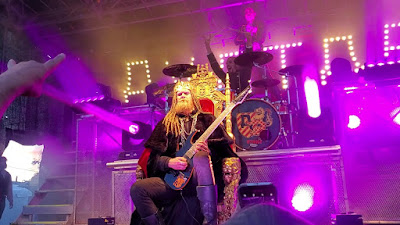 The first full-length song on Avatar Country is this 8-minute opus setting the stage for the concept album to come.  "Legend of the King" differs in tone from the rest of the album, with more of an earnest tenor to rope the listener in before the next song lowers the satiric boom.  The chorus features a hooky vocal melody but also a fantastic Iron Maiden-y sixteenth note guitar riff.  This is undoubtedly the best song on the record. 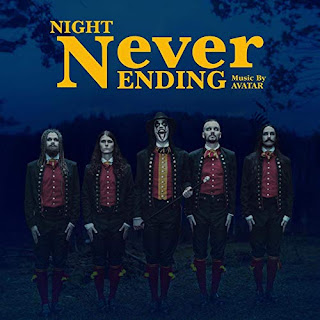 This anthemic, uplifting fight song stands out immediately on Feathers & Flesh, with its rolling triplet beat and soaring vocals.  On my first listen of the album this song was my favorite; it's instantly hooky and shows off Avatar's knack for pure rock n' roll songwriting, while offering a bit of punk flavor. 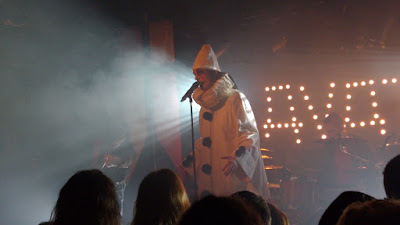 The lone ballad on Feathers & Flesh is this melancholy waltz, conveying a tearful goodbye as the singer laments a lost loved one.  "Fiddler's Farewell" is another song that jumped out at me right away on first listen; its chorus is one of the band's most infectious to date.

7. When the Snow Lies Red

This dynamic tune kicks off with a hugely heavy riff, over which Johannes screeches a death metal eulogy for a fallen ally.  But what sets this song apart is the sparse, quiet chorus that stops the heavy metal momentum dead in its tracks, with a simple clean guitar riff and delicate vocal harmonies.  Like System of a Down's "Chop Suey," this song then climaxes with a suped-up heavy version of the chorus.  The main guitar riff also goes through several permutations throughout, illustrating Avatar's skill with repeated motifs. 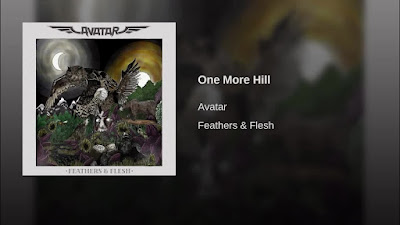 Another one from Feathers & Flesh (if it weren't already obvious, that album is my favorite), "One More Hill" is a battlefield hymn with a System of a Down-esque verse and a radio-friendly harmonized chorus.  The middle section also boasts some of the best lead guitar work by Jonas Jarlsby and Tim Ohrstrom, their melodies bouncing back and forth as the song builds to its final refrain. 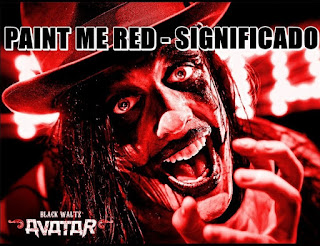 In my opinion the best track from Black Waltz is this disturbing little number, seemingly about a sadomasochistic relationship, wherein "Little Miss J" is called on to "cut my skin and make me perfect."  This song has one of the band's best chorus hooks, over an infectious harmonized rhythm guitar line.  "Paint Me Red" marks one of the group's early uses of layered vocal harmonies, which would become much more prevalent on later albums.  This is still one of their concert crowdpleasers. 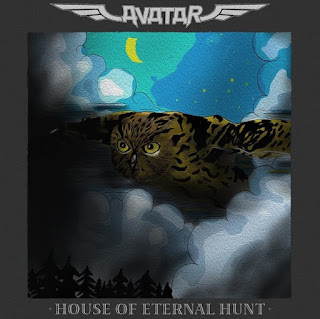 The proper kickoff to Feathers & Flesh begins with an absolutely killer guitar melody before bursting into a full-on power metal gallop.  "House of Eternal Hunt" would be at home on a Helloween record, with its complex chord changes, double-lead harmonies and war cry vocal lines.  The middle section slows things down with the feel of a yearning minor-key dirge before picking up speed again.  Beautifully capping off this anthem is a harpsichord rendition of the main guitar riff, which sets the expectation that anything can happen on this record. 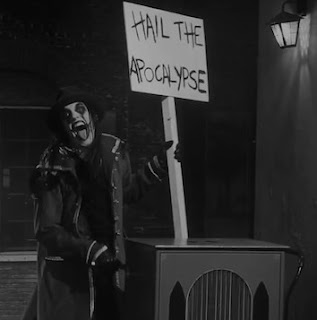 Maybe Avatar's greatest guitar riff is the one around which the anarchistic "Hail the Apocalypse" is built - a sludgy, midtempo chunk, assisted by the whammy bar so that it slides back into place at the end of each phrase.  This is an ingenious bit of songwriting.  Atop the monstrous instrumentals, Eckerstrom goes full sandpapery death metal, growling at the top of his lungs about how the world is ending and we should all welcome it.  This song has such incredible visceral energy it's still often their show opener, a scorched-earth battle cry that instills morbid joy.  Bonus points for the video, shot like a 1920s silent film.  "All flesh is equal when burnt."

2. The Eagle Has Landed 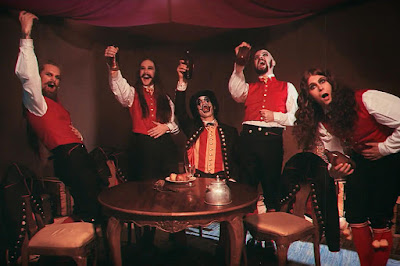 My Avatar gateway was the first single from Feathers & Flesh, the System of a Down-y, disco-beat-infused "The Eagle Has Landed," which right away demonstrated Avatar's mix of brutal guitar-driven metal and ironic humor; I was hooked.  This song also contains one of my favorite guitar solos, as Jonas and Tim share Dimebag Darrell-inspired lead duties.  Also of note is the somber extended outro, which almost feels like a transitional piece into the next song. 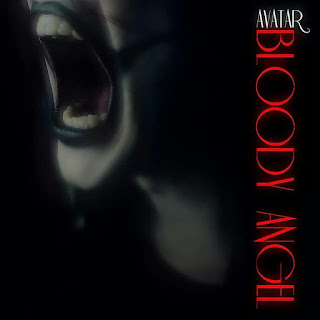 For me the heavyweight champion of Avatar songs is the mournful, upsetting "Bloody Angel," perhaps inspired by the Holocaust, in which the speaker tries to compartmentalize the horrible violence he's witnessed ("I've seen enough to feed my psychosis for a lifetime").  The song's dynamics bounce back and forth, ranging from understated harmonic minor gloom to all-out death metal blast beats.  From a band as fun-loving as Avatar, "Bloody Angel" is as serious as it gets - evocative, distressing, elegaic.  To date, this song is Avatar's masterpiece.


And that's what I think of Avatar - did I miss any of your favorites?  Comment below, and thanks for reading!

Posted by Justin Enuffa Ballard at 8:46 AM