Welcome to another edition of Movies of Disbelief, here at Enuffa.com!  If you're unfamiliar, MOD is where I examine a film, good or bad, that's based around a far-fetched premise, but find one aspect or scene that not only stretches or breaks the bonds of credibility, but pisses all over them. 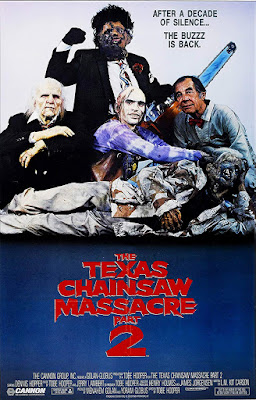 Today's subject is a little different though.  As patently absurd, campy and over-the-top as this film is, the part of it I refuse to believe isn't even something that happened in the story.  It's the idea that The Texas Chainsaw Massacre 2 was directed by the same guy as The Texas Chain Saw Massacre 1.  Yeah that's right, Tobe Hooper, the man who in 1974 created a horror masterwork with no budget, no stars, and the worst imaginable filming conditions, somehow followed it up 12 years later with a sequel that basically sprays moldy diarrhea over everything that was great about the original.  I cannot wrap my brain around the fact that the same director made both of these movies.

Before we get into the crime against cinema that was TCM 2, let's just recap the first one a little.  The Texas Chain Saw Massacre, loosely inspired by the Ed Gein murders (as well as those of Dean Corll - look up that saga, it's revolting), was shot using grainy 16MM film, on a budget of roughly $150,000.  Like Night of the Living Dead it made use of real rural locations (see Herzog, Werner: "the voodoo of location") and was filmed in a cinema verite style, allowing the horrific tale to come to life in a way that felt totally authentic and heightened the terror.  We as the audience feel like we're experiencing these ghastly events along with the protagonists.  The cast of unknowns is first-rate, playing the scenes in a casual, naturalistic way and largely improvising the loose dialogue.  By the time everything goes to hell in the second act, we've been given a reason to care about the five young adults.  We're given no background about the family of maniacs - they are simply an evil force of nature, with no discernable reason for what they do; making sense of it would undermine the senseless cruelty Sally endures in the final half-hour.  But despite the film's grisly tone and subject matter, almost all the violence and blood is left to the imagination.  Only once for example do we see chainsaw meeting flesh, and it's when Leatherface (one of the great boogeymen of horror cinema) falls down and accidentally gouges his own thigh.  But the film's timbre is so intense and macabre we think we're seeing more gore than we are.  It's brilliantly understated.  The Texas Chain Saw Massacre is far greater than the sum of its parts; all the unconventional elements came together - off-putting locations, genuine performances, innovative cinematography (the closeup montage of Sally's face during the dinner scene is mindbreaking), and unsettling musique concrete-inspired score (courtesy of Wayne Bell and Tobe himself) - to create a fully immersive experience of palpable terror.  It's one of the all-time great horror films.


Now, read everything I just said and then watch the sequel.  Everything that made the first film effective is missing in the second.

Where the original looked and felt like a documentary of a terrifying scenario, the sequel is pure, calculated artifice from start to finish.  Real locations were replaced with blatantly phony, over-the-top sets.  Environmental lighting gave way to standard, mostly flat 80s Hollywood lighting.  The sparse, disquieting soundscape of the first film was replaced with cheesy, non-scary 80s synth strains.  Credible, naturalistic performances were supplanted by hammy, caricature-esque scenery chewing; the four villains are a parody of their former selves.  Not one of them is scary in a visceral, elemental way.  Chop Top (Bill Moseley as the retconned twin brother of Edwin Neal's hitchhiker) is disgusting and perv-creepy, but not genuinely frightening and certainly not believable as a real person (nor are his prosthetic teeth and exposed steel skull plate).  Jim Siedow, returning as The Cook (Drayton Sawyer as he is now known) comes off as self-satire, googly-eyed and sing-songy instead of the sinister-but-conflicted character he once played.  The iconic Leatherface (Bill Johnson, replacing Gunnar Hansen) is a lovestruck buffoon here, somehow finding ways to be cartoonish behind his (obviously fake this time) skin mask.  As for the protagonists, Caroline Williams as local radio DJ Stretch is a likable and compelling firebrand in the first act, but once the shit hits the fan she seems totally out of place as a damsel in distress, her incessant screams coming off as false and grating rather than sincere and primeval.  And Dennis Hopper looks like he'd rather be anywhere else than in this turd of a movie, spacey and lumbering in the first half, coked up and screaming nonstop in the second.  I'm honestly not sure why they cast him here; yes he was an established actor, but no one is going to see a Texas Chainsaw Massacre film to see big stars.  The original made $30 million with a cast of unknowns and an independent director.


But maybe the most pervasive issue with this sequel is its tone.  Tobe Hooper decided that since most people missed the dark comedic elements in the first film (understandable since the main takeaway is that it's psychologically disturbing), he wanted to play them to the hilt in the second.  I can respect the desire to do something different, but to follow up a genuinely scary film with a campy sequel doesn't work unless your name is Joe Dante.  The tone of this film doesn't at all fit that of its predecessor and it's like Hooper couldn't decide if this movie should be scary or funny.  As a result it's neither; the villains are ridiculous instead of frightening, but not in a way that makes you want to laugh at them.  More in a pitiable sort of way; you really feel sorry for anyone who's got this movie as a featured resume entry.  Not only that, but the tone shifts radically from one scene to the next - one minute Chop Top is bouncing around the set like a sugared-up kindergartener, the next we're watching in intimate detail Leatherface skin a guy's face off and place it over Stretch's, then the skinned guy gets up and starts talking.  You generally can't go from funny camp to vomit-inducing gore and have it work.


And that brings up another point.  Tom Savini's gory makeup effects are well-executed for the most part, but they're out of place in this film.  The first movie left almost all the blood and guts to the imagination.  This one shows you everything, and instead of being scared you're just grossed out.  The editing, too, looks amateurish; there are numerous moments where someone is either stabbing, kicking, or bashing another character and it's blocked and edited so poorly it looks like a first-year student film.  Did Hooper not get more than one take of anything?


Hooper even recycles iconic moments from the first film, for example Kirk's convulsing for a few seconds after being clobbered with a hammer becomes LG convulsing seemingly forever as Chop Top feebly tries to club his brains in.  The agonizingly horrifying scene of Grandpa repeatedly trying to bash Sally with a hammer is redone here almost shot-for-shot, except without any stylistic flair or restraint.  The scene becomes annoying instead of upsetting. 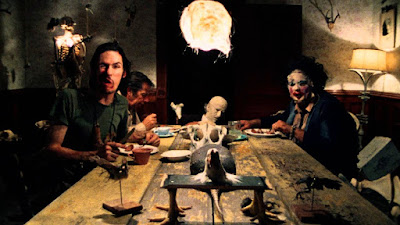 It is baffling to me that these two films were made by the same man.  One is a masterpiece of primal, authentic backwoods terror, the other is a hodge-podge of chintzy gore and bad humor.  It's almost like Hooper didn't understand in the slightest what worked about the first film.  Either that or he hated it and wanted to make a mockery of it.  Either way, this aspect is the most unbelievable thing about TCM 2 for me.  I refuse to accept that Tobe Hooper had anything to do with it.

Posted by Justin Enuffa Ballard at 10:09 AM