Welcome to another Enuffa.com Top Ten Things, where I pick my ten favorite somethingorother and bug all of you about it.

One of the most influential metal bands of all time, Iron Maiden was formed in the mid-70s by bassist Steve Harris.  Over the first few years the band went through various incarnations, hiring and firing band members with a frequency that would make Spinal Tap cringe.  Finally in 1980 they released their self-titled debut album and immediately gained a strong UK following, in competition with the burgeoning punk scene.  Bands like Maiden, Diamondhead, Venom, Motorhead, and several others formed a musical zeitgeist called The New Wave of British Heavy Metal (which influenced literally dozens of bands here in the States).  Maiden was soon forced to sack lead singer Paul D'Anno due to his increasing drug issues, and his replacement was diminutive onstage firecracker Bruce Dickinson, who brought incredible vocal range/power and athletic physicality to the role of frontman.  Their third album The Number of the Beast was a No. 1 smash hit in the UK and propelled Iron Maiden to international stardom.  A slew of successful albums followed, containing scores of classic songs, until Dickinson left the band in 1993 to pursue a solo career.  His successor Blaze Bayley recorded two albums to a rather tepid reaction, and in 1999 Dickinson was coaxed back into the fold. 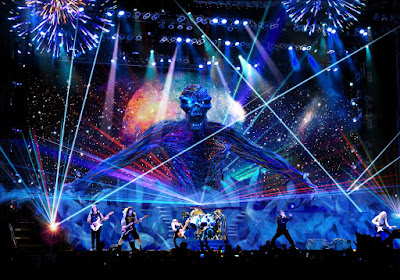 Over the past fifteen years Maiden has released five more albums and embarked on several hugely successful world tours, and they remain a chart-topping worldwide phenomenon.  Their music has evolved a bit over the years but they've always maintained their signature galloping energy and  literature-inspired lyrics.  Their onstage enthusiasm continues to defy the band members' advancing age, and they routinely deliver an amazing live concert experience.  A side note: historically just as mythical as the band's music are the album covers and other associated imagery.  For years artist Derek Riggs created some of the greatest cover art in music history, featuring the band's undead mascot Eddie the Head.  A few of my favorite Riggs pieces are the covers of Powerslave, Somewhere in Time, Seventh Son of a Seventh Son, and Live After Death.

But enough about that; here are my picks for the Top Ten Iron Maiden songs of all time.

**Note: While I like and appreciate some of their 21st Century work, for me the classic Maiden period was 1980-1992, so all ten picks fall into that timeframe.** 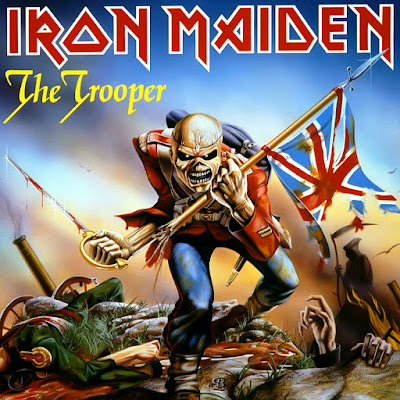 Probably the most noteworthy song on 1983's Piece of Mind (Dickinson's favorite album), "The Trooper" kicks off with a start and stop feel, over which Bruce barks a defiant battle cry ("You take my life but I'll take yours too/You fire your musket but I'll run you through").  The band then dives into charging pace as the wordless chorus takes over.  What other lasting metal tunes boast a refrain consisting of nothing more than "Oh-oh-oh-oh-oh-oh-oh-oh-oh!"

The first of two entries from Seventh Son, "The Prophecy" opens with a gentle clean guitar arpeggio before exploding into a heavy triplet groove.  Dickinson regretfully howls out a warning message to an unnamed group of villagers of their impending doom, which then goes unheeded.  "The Prophecy" is simple but tremendously hooky, jumping from a minor key verse into a major key chorus.  I also love the baroque acoustic guitar outro. 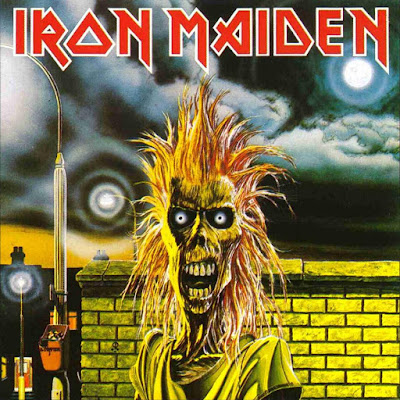 The one non-Dickinson song on this list is the self-titled final track of the self-titled debut album.  An uncomplicated, nihilistic metal anthem, the lyrics of "Iron Maiden" dare the listener to partake in the graphic violence of the band's music, despite the music's oddly cheery tone.  This song is akin to Metallica's "Whiplash;" simply an ode to the brutality of metal. 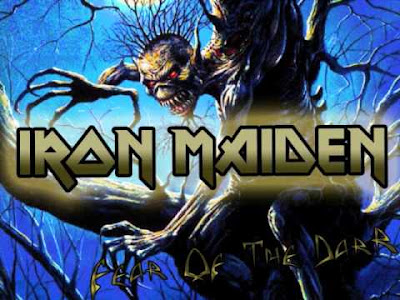 The last hurrah of Dickinson's original run with the band was the title track of 1992's Fear of the Dark, a seven-plus-minute opus about the universal dread most of us deal with when wandering at night.  There's nothing conceptually intricate about this one, it's just a killer archetypal Maiden song. 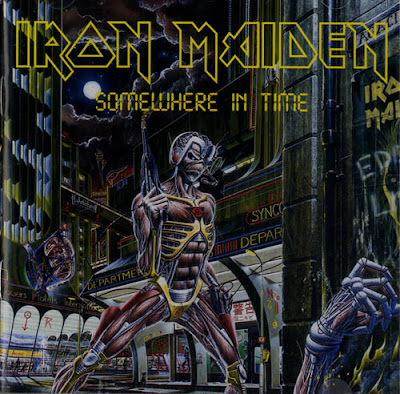 1986's Somewhere in Time began a period of experimentation for Iron Maiden, as they introduced synthesized sounds to their distinctive brand of metal.  "CSIT" begins with a synth-assisted guitar harmony before bursting into the instantly recognizable Maiden gallop.  Dickinson's thick vibrato then bellows "Time is always on my side," one of the catchier choruses in their catalog.  Incidentally this was the first Maiden song I ever heard and I was shocked how melodic their music was; the cover artwork set the expectation of a really extreme death metal band. 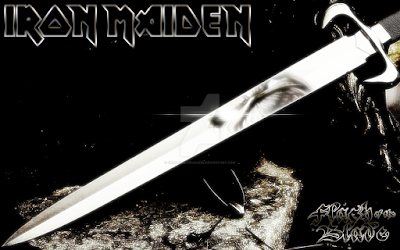 Powerslave is an album that's grown on me quite a bit over the years.  Initially I considered it a step below their best work (Number of the Beast, Somewhere in Time, etc.), but recently I've come to realize how much urgency this album has (it's now in my Maiden top three).  They took their formula and added a more aggressive edge with Powerslave, and the album's apex is the incredibly hooky "Flash of the Blade."  Essentially a "live by the sword, die by the sword" parable, the lyrics are sung to a young man who from birth was destined to be a swordsman.  The main riff of the song is based on a repeated pull-off, over a fast shuffle beat.  The energy in this song is off the charts, and the harmonized chorus is one of the best of Maiden's career, plus there's that magical layered lead guitar section in the bridge.  Great, great song.


4. Can I Play With Madness 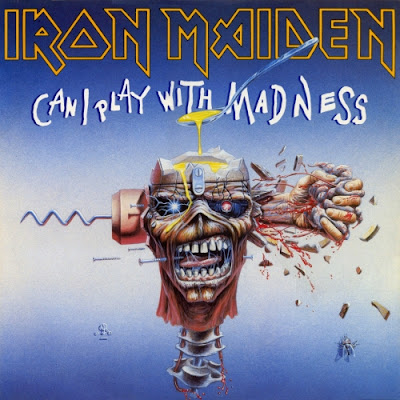 Speaking of great choruses, "Can I Play With Madness" could've easily been a Top 40 hit in the US, had it not come from a band with devils and zombies on their album covers.  With lyrics dealing with mystical prophecy, the song contains a midtempo verse that gives way to a high-energy, driving chorus featuring a harmonized call-and-answer.   Making the song even more vital is the simple lead guitar melody that follows each "answer" line.  Just fantastic songwriting. 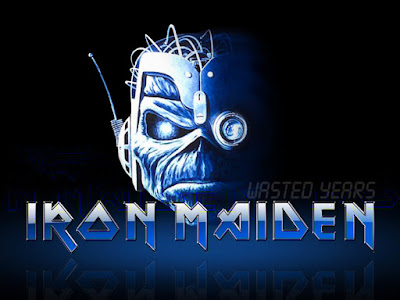 The big single from Somewhere in Time is this super-catchy, uplifting tune about the futility of regret that begins with a syncopated guitar melody before erupting into a heavy midtempo feel.  If ever Iron Maiden wrote a "radio single," this is it.  The harmonized chorus is instantly memorable, bursting with positivity and urging the listener to live in the moment ("Realize you're living in the golden years"). 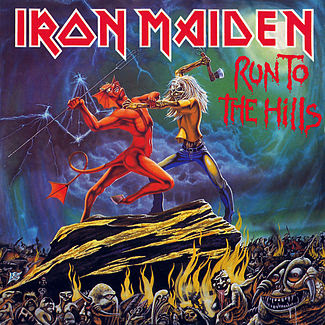 My top two picks are from the same album, which for me is the band's definitive work.  The first is about the exploitation and genocide of the American Indian at the hands of white settlers.  Somehow despite the grim subject matter the song boasts one of Maiden's greatest chorus hooks, delivered as a wall of vocal harmony over maybe their best-delivered "Maiden gallop," conjuring  images of two parties warring on horseback.  The finale of the song features Dickinson's climactic high-pitched howl over a barrage of guitar, bass and drum fills. 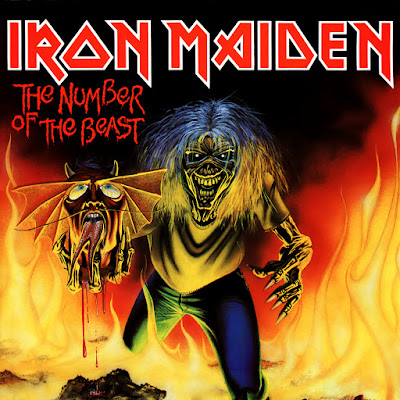 What else could be Number 1?  "Number of the Beast" is the song that put Maiden on the charts, stirring controversy over satanic lyrics, despite the piece having been written as a joke.  Again defying genre convention and seemingly dark subject matter, "Number" is musically invigorating, boasting a fast tempo in a major key.  The accompanying video is a paragon of early 80s heavy metal cheese, with folks ballroom dancing while dressed as demonic characters and cliched imagery abound.  This is Iron Maiden at their most raucously satirical.  I hope to someday have a street address of 665 so I may call myself The Neighbor of the Beast.

Posted by Justin Enuffa Ballard at 9:19 AM