Welcome to the long-awaited return (by at least three people) of Awesomely Shitty Movies, here at Enuffa.com!  It's been a while for this feature, but at long last I found the time to sit down and watch a movie I can't help but sorta like, despite it being pretty goddamn terrible.  That "film" is the infamous (ya know, MORE than famous) 1967 television special "written" and "directed" by The Beatles, Magical Mystery Tour! 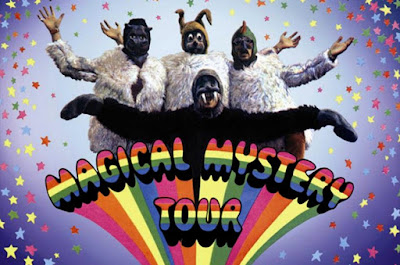 Inspired by mid-60s cross-country bus trips organized by author Ken Kesey, and mostly Paul McCartney's brainchild (though he later said he wasn't sure he wanted to take the full blame for it), Magical Mystery Tour tells the story (for lack of a better word) of the band and a group of their friends taking a bus excursion across the English countryside, interspersed with music videos of the band's latest songs (featured on the album of the same name).  And, well, that's it.  The Beatles attempted to conjure a plot out of thin air but the resulting film is more a collection of little episodes and sketches than it is a proper story.  It was horribly received upon its release (not helped by the fact that the BBC channel on which it originally aired didn't have color capability at the time), but has somewhat gained in popularity since (probably because The Beatles were involved) and currently enjoys a very generous 62% fresh rating on Rotten Tomatoes (Disney probably paid them to put that there, amirite??).

I became a hardcore Beatles fan around age ten and sought out all their music and films, and in 1986 my parents bought me a low-grade VHS copy of this movie that looked like absolute cow shit.  And because it was a Beatles endeavor I'd convinced myself it was quality entertainment, knowing deep down it was a major misfire from a band I'd held up as infallible.  Still to this day part of my brain has a weird appreciation for this flop, and when I discovered a cheap Blu-Ray restoration on Ebay I had to bite.  In 1080p this film absolutely gains something back from a visual standpoint, so there's that at least.  And despite being a disorganized mess, parts of it have an offbeat charm to them.  But man, is this thing a clusterfuck if you go into it expecting an actual movie.

But enough introductions, let's take a look at the pluses and minuses of Magical Mystery Tour.  A Hard Day's Night this ain't.....

Any movie whose soundtrack is comprised of Beatles music automatically scores a few points with me (as it should with everyone).  Granted, the songs written specifically for this film, "I Am the Walrus" excluded, are probably not on anyone's Beatles top ten list.  But this movie is essentially strung together on a clothesline of Beatles music videos, so that aspect has to be considered its strongest feature.  Imagine how much better it would've been if it were built around the second side of the MMT album though.  "Strawberry Fields," "Penny Lane," "All You Need Is Love..."

To that end, each music video is pretty cool visually.  Paul's "A Fool on the Hill" was shot in the mountains of France and boasts some beautiful natural scenery.  "Flying" largely consists of discarded landscape shots from Dr. Strangelove but with color filter effects (Did Stanley Kubrick lift that idea for similar shots in the 2001 "stargate sequence" or vice-versa?).  "I Am the Walrus" is a super bizarre, trippy video that Paul McCartney himself later cited as the one indisputable positive to come out of this film.  "Blue Jay Way" is gloomy and atmospheric like the song that inspired it.  "Your Mother Should Know" is a fun little ballroom act sequence.  On top of the videos, there are some interesting little touches scattered throughout.  The Aunt Jessie nightmare sequence for example includes an unnerving shot of a little person snapping photos from a swinging cage apparatus, a shot that would've been right at home in a David Lynch film.  So regardless of its myriad of shortcomings, Magical Mystery Tour definitely has no dearth of intruiging things to look at. 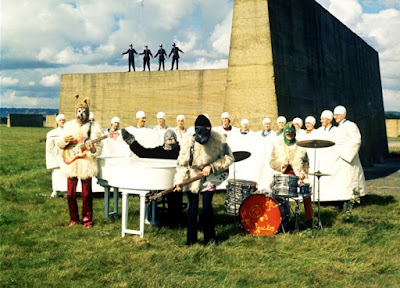 I love the 1960s.  It's one of those eras I wish I could go back and experience for a while.  The Beatles' seven years of active notoriety must've been a very exciting time to live through, as well as the massive cultural and societal shifts that took place in conjunction.  So any film that transports me to that time is almost guaranteed to be, at the very least, fascinating to me.  Plus this movie was essentially the final creative output from their psychedelic period.  It would've been nice to ring down that curtain with a bang instead of a whimper, but you take what you can get.

For some reason the band got the bright idea to more or less improvise an hour-long TV special by collecting a bunch of actors and friends and going on a bus trip that was supposed to come across like an adventure of sorts.  Problem was they couldn't really come up with any compelling story ideas along the way.  In between the aforementioned music videos they stop at a military base where a drill sergeant barks unintelligible instructions at them, engage in a chaotic multi-vehicle race around a track, cram into a tiny tent to watch a video, and finally the men go to see a burlesque show.  Oh, and some weirdo on the trip who thinks he's one of the couriers expresses his romantic interest in Ringo's aunt.  All this stuff is happening at the supposed whim of four or five magicians, but neither that thread nor any other is followed up on.  There's no real through-line or drama.  To quote Ringo's response to the drill sergeant, "Why?  Why?" 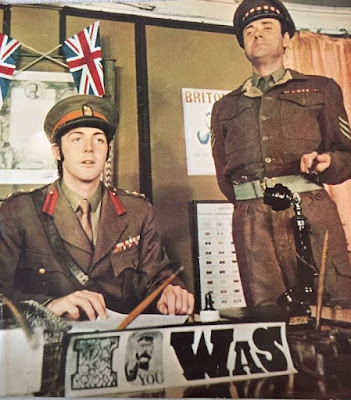 Since the movie was mostly improvised they also shot without a proper script.  They would write down various ideas, shoot them all, and keep whatever "worked."  I'd hate to see the deleted sequences if this was the best they came up with.  Case in point, the movie devolves into a weird singalong segment near the end and there's literally nothing of interest going on except that Ringo appears to be getting sloshed.  There are a lot of moments that feel like they're just filling time in between videos.  Why couldn't they get Richard Lester to write and direct? 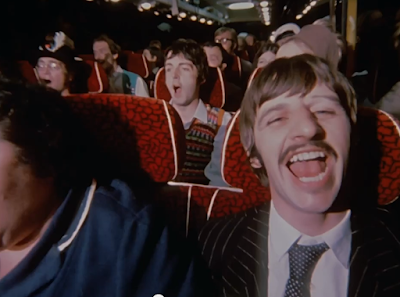 For a movie starring The Beatles, the four members of the band don't really have much screen time, apart from the music videos.  They appear as wizards a couple times, Paul appears as Victor Spinetti's sidekick but doesn't say much at all, John appears as the dream sequence waiter, and Ringo gets maybe the most screen time thanks to his scenes with Jessie.  But John as himself only has one real speaking scene, with little Nicola, Paul barely says anything as himself, and I think George's only lines in the movie are "Thank you" after John gives him a balloon, and "a song" in the second wizard scene.  I dunno about you, but I'd certainly rather watch John, Paul, George and Ringo's shenanigans than spend much time with Aunt Jessie or Mr. Bloodvessel.  Couldn't they have come up with SOMETHING for the stars of the film to do?  I realize it's a lot to ask that we see more of The Beatles, IN A BEATLES MOVIE. 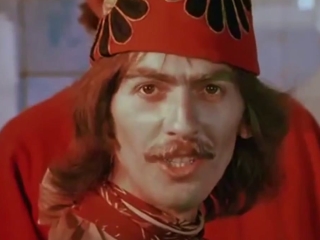 -John's first bit of voiceover states "When a man buys a ticket to a Magical Mystery Tour, he knows what to expect."  Wait, I thought this tour was a mystery.  Shouldn't he NOT know what to expect?  If he went into this knowing it was gonna suck, he very definitely should've saved his money.

-In Jessie's nightmare about John as a waiter shoveling pasta onto her plate (inspired by an actual dream John had), said pasta is apparently supposed to be spaghetti, but it looks like wide sheets of lasagna or pizza dough to me.  Am I wrong? 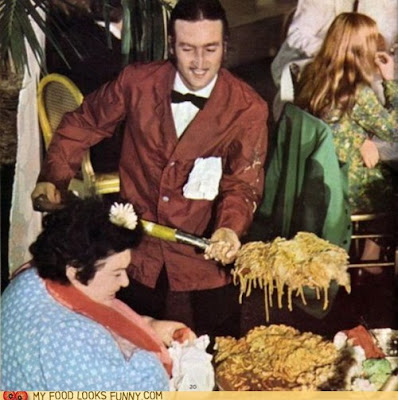 -Whose kid is Nicola?  She's the only child on the trip and doesn't seem to be attached to any of the adults.  Did she sneak on board?

-At the end of "I Am the Walrus" there's a little montage of various passengers eating what appears to be some sort of carnival snack.  What are they eating, why is it in this video, and can I have some? 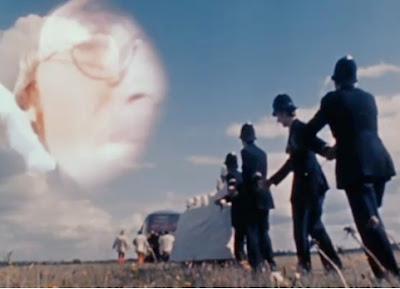 -This isn't a nitpick but an interesting piece of trivia: the band near the end of the film whose act features a striptease is called The Bonzo Dog Doo-Dah Band.  Their guitar player?  Neil Innes, who played Ron Nasty in the Beatles parody film The Rutles.  Mind fucking blown. 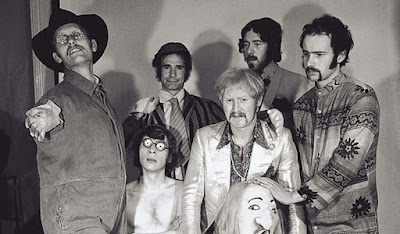 -Another interesting fact, the band Death Cab for Cutie took its name from Bonzo's song in this film.  My old VHS copy had such bad audio I couldn't understand what they were saying, so I just realized this upon viewing the Blu-Ray.

-A third and final interesting fact, the head bus courier Jimmy Johnson is played by Derek Royle, who also played an ill-fated hotel guest who dies in his sleep on an episode of Fawlty Towers.  I knew he looked familiar! 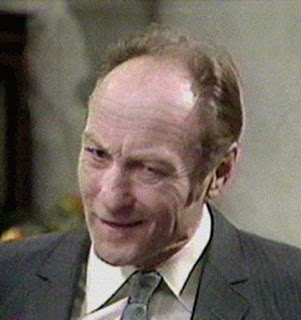 So yeah, Magical Mystery Tour is generally and rightly considered the worst thing The Beatles ever put out.  It's more or less devoid of any narrative and doesn't have the wonderful cheeky humor of say A Hard Day's Night, nor the production budget of Help!  But since it's The Beatles, whom we can't help but love, it does have an uncanny, off-the-wall appeal, plus official music videos for five tunes (The title track is just an intro montage so I'm not counting that one).  This movie will never be held up with their classic first two films, but in spite of itself I can't help but pop it in once in a while for a silly psychedelic romp.  I guess that's what makes it an Awesomly Shitty Movie.... 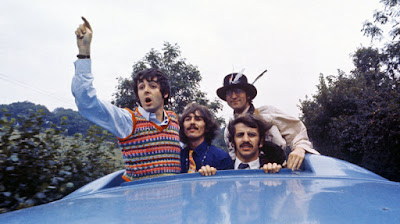