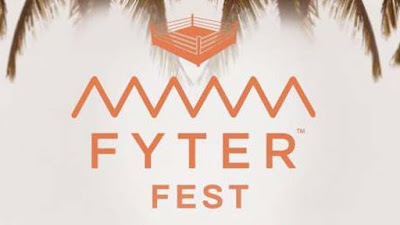 AEW Fyter Fest is upon us for the second time, and while still a free show it'll be spread over two AEW Dynamite episodes instead of being presented as a BR Live broadcast.  The eleven matches all have some promise, and the July 1st lineup seems a bit more stacked.  AEW always brings a sense of fun spontaneity to the table, so I'm looking forward to two enjoyable "telecasts" as Tony Schiavone would say.  Sorta feels like the old Clash of the Champions shows, which I always looked forward to as a kid.  Let's dive in. 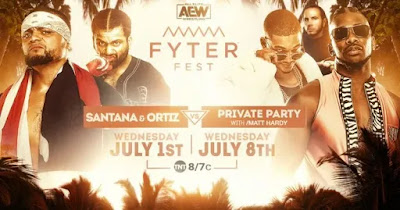 This would be perfect in the opening slot; a high energy, super-athletic tag team showcase to get everyone revved up.  I expect this to be a dazzling 12 minutes or so, with high spots galore just to piss off everyone who complains about flips.  Santana & Ortiz should win this I think, to reestablish them as an upper tier team. 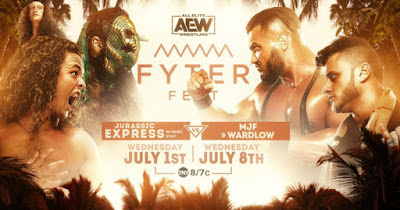 I'm really excited for this one.  MJF vs. Jungle Boy was a fantastic Double or Nothing match, while Luchasaurus vs. Wardlow last week was a thrilling athletic big man contest.  Wardlow has IT; push this monster to the moon.  All four guys will get lots of opportunities to shine.  MJF is still undefeated and Wardlow shouldn't lose yet, so I expect them to win. 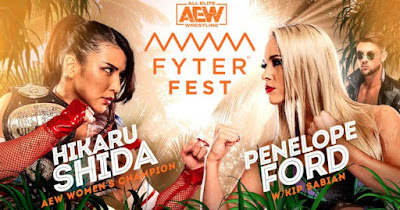 Another intriguing match.  I've been very high on Shida since AEW's debut, while Ford has a ton of potential.  This match should further establish Shida as the face of the division while helping to elevate Ford's game.  Should be a fun title defense. 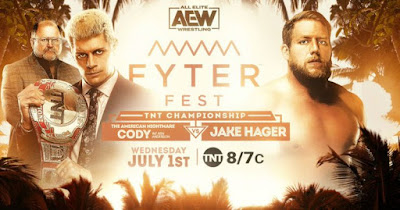 It's an old school charismatic babyface vs. monster heel contest.  Cody's matches in AEW have been refreshing throwbacks to a simpler, more logical time in wrestling when sharply drawn good and evil characters told dramatic in-ring stories.  Putting the equivalent of the TV Championship on him was a smart move.  This should be a title defense where Cody escapes by the skin of his teeth. 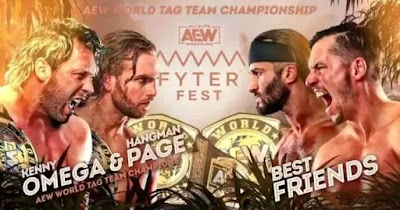 I assume this is going on last and that it will be spectacular.  We all know Omega and Page will feud at some point, the question is when, and also who will be the ones to dethrone them?  I don't think it should be Best Friends.  Lucha Brothers perhaps.  Or FTR.  Or the Bucks can get another crack.  Regardless, this should be a great Night One main event.  I was skeptical when Omega & Page won the belts, but they've become an engaging duo who aren't always on the same...well, page....but always seem to pull through for the common good. 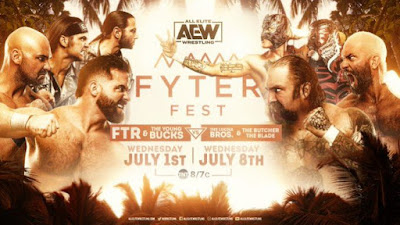 This'll be a wild eight-man tag.  It'll be great to see Pentagon and Fenix back in action and particularly fun to see them mix it up with FTR.  AEW's tag division is bursting with talent and this match will be a thrilling illustration of that.  The Bucks and FTR are clearly on a collision course, I'm guessing at All Out, so we could see them come to blows here or at the least cost each other the match.

This is probably the least interesting match of the two shows.  It's all about furthering the Brodie Lee-Colt Cabana angle.  Lee needs an opposite number to feud with, someone like Lance Archer but a babyface.  Anyway this match should be fine but I don't expect anything amazing.  The Dark Order will likely take it. 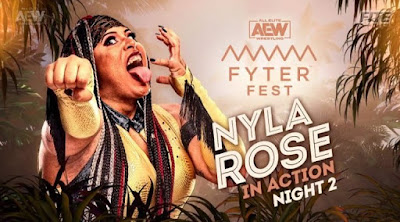 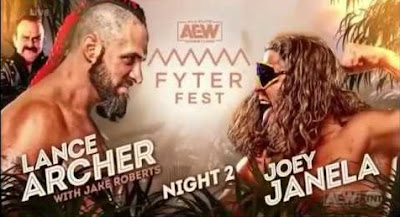 Joey's about to get destroyed in spectacular fashion.  That guy is nuts.  Archer can use this decisive win after coming up short against Cody. 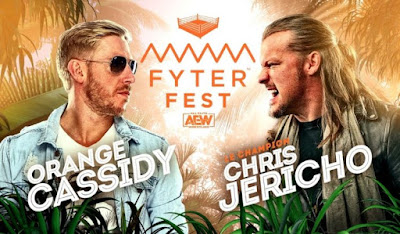 This is gonna be awesome.  Cassidy's match with Pac at Revolution was damn-near a show stealer and with Jericho's impeccable character work this should be even better in some ways.  This lazy orange prick is one of the most purely entertaining personas in AEW, and he has the pure athleticism to back it up.  In an odd way I can identify with Cassidy; I'll work hard but only when it's urgently necessary, otherwise back off man, you're harshing my mellow.  Can't wait to see this.

Pick: I could see Cassidy getting an upset but I think Jericho probably wins in such a way that Cassidy is elevated despite losing. 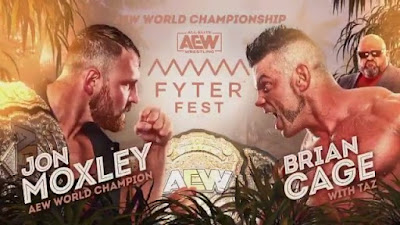 Moxley's wife Renee Young was diagnosed with COVID last week (speedy recovery Renee!) so his match here is I guess still up in the air.  But as of now there have been no announcements of him needing to back out.  If this goes on as planned it should be a brutal brawl as most of Moxley's bouts are.  Cage is another super-athletic big man with innovative offense, which should help make this match stand out from the usual hardcore-style stuff.  I see this going all over the arena like Moxley-Lee did, with plenty of car wreck spots.  No reason to take the belt off Moxley at this point, so he's retaining.


Fyter Fest 2020 should be yet another highly entertaining AEW offering.  I'm really enjoying where this company is heading; even when they do something I don't agree with or a match doesn't land, it doesn't detract overall, unlike with WWE where counterproductive decisions compound on each other until the product is no longer fun.  For me AEW has filled a massive void in North American wrestling.