Late to the Party: Hamilton

Welcome to a new Enuffa.com feature called Late to the Party, where I discuss a movie, an album, a recording artist, a book, what-have-you, that for me was an acquired taste of the tardiest kind.  Something everyone else seemed to get right away, but for which I was slow on the uptake.  Case in point, Lin-Manuel Miranda's epic Broadway musical Hamilton.... 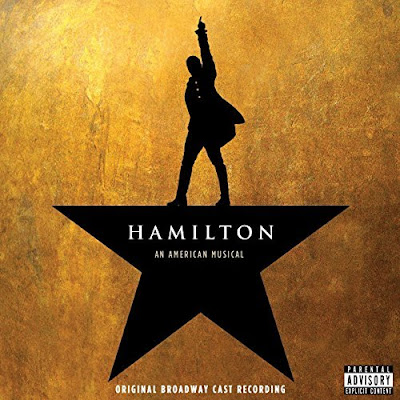 As with so many artistic ventures that seem to come out of nowhere and take the world by storm, I was initially quite resistant to Hamilton when I first became aware of it.  Not really being a musical theater enthusiast (I like some musicals, but it's a pretty select few) and most certainly not being a hip-hop guy (Aside from Outkast there's very little in this genre that interests me), the idea of a rap musical centered around one of the less celebrated founding fathers didn't exactly pique my interest.  Couple that with the almost hysterical devotion this show has generated since its January 2015 debut, not to mention the astronomical prices being charged for tickets, and my first reaction was something along the lines of "Get the fuck outta here with this...."

Fast-forward two years, and my wife finally gave the Cast Recording a listen after much prodding from a close friend who was already obsessed with the show (We'll call her Shamilton).  By the third or fourth go-round my wife was all, "Justin, you HAVE to listen to this."  "Yeah yeah yeah, whatever," I replied.  Then one weekend we had a drive up to the beach, roughly 80 minutes each way, and she chose that as the time to make me a captive audience.  I'd been expecting an hour-long soundtrack album, not realizing Hamilton had no dialogue outside of the songs, and said, "Jeezus, how long is this thing??"  So I listened to it front-to-back and found it mildly interesting.  I'd be lying if I said it blew me away the first time.  The music was so densely composed and covered so much ground, and I wasn't sure who was singing what to whom, that a lot of it was in one ear and out the other.

But like so much of the best art, the Hamilton album isn't about instant gratification.  It slowly burrows its way in, and only after you've become familiar with the story being told and fully absorbed the music does it yield its true rewards.

About a week later, after hearing the album again in the background at a pool party (I will say this stuff doesn't make for the best passive listening experience), I decided to give Hamilton a really honest try on my own iPhone, with no distractions.  And goddammit, everyone else was right.  I was wrong.

As a double album, Hamilton is a grandly concieved, meticulously detailed, obstinately ingenious concept record about the rise and fall of this underappreciated co-architect of the American experiment.  The 47 tracks cover the ambitious Hamilton's journey from orphaned immigrant (born in the West Indies and grew up in the Caribbean) to Revolutionary War officer to the first Secretary of the Treasury, and depict his numerous sweeping contributions to America's inception, as well as his various political and personal battles while helping shape the ungainly, chaotic system of government known as democracy.  Indeed, Hamilton makes no effort to lionize the founding fathers; they, like all human beings, are flawed, ego-driven, and prone to mistakes.
Inspired by Ron Chernow's acclaimed Alexander Hamilton biography (which he took on vacation as a little "light reading"), Lin-Manuel Miranda became fascinated to the point of obsession with this man's story, and labored for years to put together a concept album, later opting to make it a stage play.  That he managed to make this story work as a hip hop opera (a "hip hopera" if you will) is astounding, but it also makes use of traditional Broadway tunes, R&B, radio pop, and even a little classic rock.

Miranda's songwriting is intricately dazzling, the lyrics employ multi-layered, playfully complex rhyme schemes (I can't imagine how long it took for the actors to perfect these tunes), characters use callbacks to other songs to tie story threads together, and each scene is conveyed in modern language without being oversimplified.  Miranda wanted historians to be able to take this show seriously, and went to painstaking lengths (even consulting Chernow during development) to stay as accurate as possible (while admittedly taking a few dramatic liberties).  The music has a stunning vitality and urgency; even the scenes dealing with boring ol' Cabinet disputes are somehow thrilling and engaging.

The standout songs are too numerous to name, but a few of my favorites include the dramatic, strangely ominous opening number "Alexander Hamilton," King George's droll, sociopathic three-part rant "You'll Be Back/What Comes Next/I Know Him," the epic, climactic "Yorktown" which covers the war-ending battle, the sweetly tender "Take a Break," the bouncy but sinister "Washington on Your Side" (which contains possibly my favorite line in the whole show, "Let's show those Federalists who they're up against/Southern motherfuckin' Democratic-Republicans!"), Eliza Hamilton's heartbreaking rebuke of her husband's infidelity entitled "Burn," and the other tearjerker "It's Quiet Uptown," wherein Alexander and Eliza must put the pieces back together after their son Philip is killed in a duel.  But each great track is bolstered by those that come before and after it, and the album demands to be absorbed as a cohesive whole.

The performances are pretty spectacular; Miranda has surrounded himself with a vibrant, multi-talented cast.  My two favorite performances are Daveed Diggs in the dual role of the scrappy, resourceful Marquis de Lafayette and the preening, aristocratic Thomas Jefferson; and Phillipa Soo as Hamilton's egoless, steadfast wife Eliza.  Diggs' voice brings to mind Andre 3000 from Outkast, with his smooth timbre and understated demeanor, while Soo as Eliza initially undersells herself, allowing her older sister Angelica (Renee Elise Goldsberry) to steal the spotlight, but later soars during the dramatic meat of the second act.  But everyone in the cast excels, hammering home this elaborately challenging material.

Miranda has stated he hopes to adapt Hamilton as a feature film, something I eagerly look forward to.  A few requirements for the film: the original cast, the original director, and a wide visual scope.  I'll just have to make sure I see the stage show before then, provided I can score tickets for less than a mortgage payment.

As for the album, Hamilton's soundtrack transcends both the musical theater and hip hop genres, in the same way Jesus Christ Superstar became the prototype for the rock opera (In fact some of the parallels are striking - an extraordinarily gifted but flawed protagonist, a misunderstood "frenemy" who brings about his downfall, a pair of scheming rivals plotting to destroy him - this is all classic drama).  It's a story about the very founding of this country, which every American can relate to, but also a timeless tale of a driven underdog yearning to create something that will outlive him, which every human can relate to.  And the music, sweet Jesus, the music is masterful.


Posted by Justin Enuffa Ballard at 11:08 AM

Email ThisBlogThis!Share to TwitterShare to FacebookShare to Pinterest
Labels: Late to the Party, Music Stuff