Welcome to another edition of Awesomely Shitty Movies, here at Enuffa.com, where I'll examine a movie that is horribly entertaining but also entertainingly horrible. 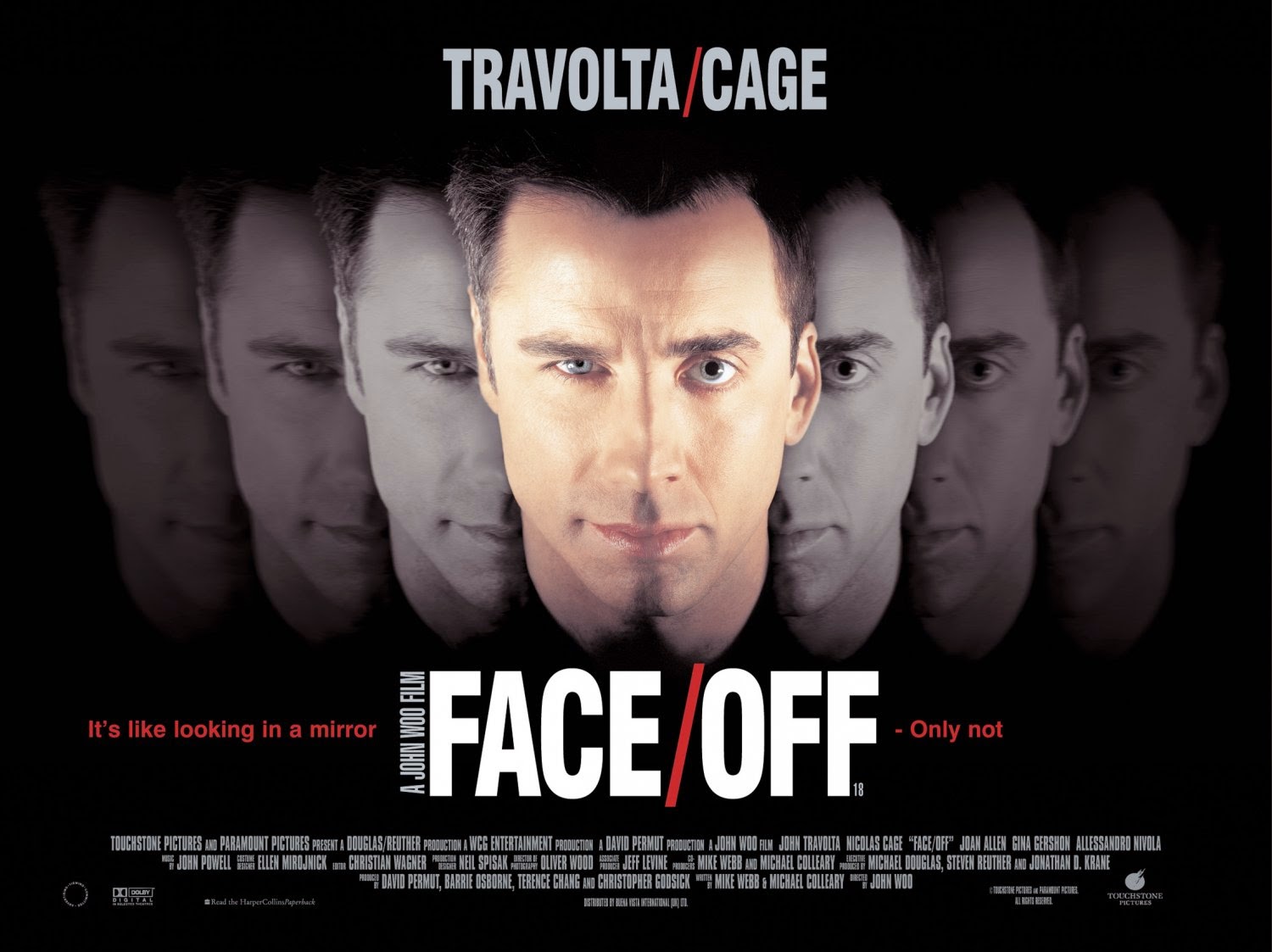 Face/Off stars John Travolta as FBI agent Sean Archer, whose son was killed by his arch-nemesis Castor Troy, a manic, sadistic terrorist played by Nicolas Cage.  Six years later Troy announces to the FBI that there's a bomb hidden somewhere in Los Angeles which could potentially kill millions of people.  The FBI attempts to capture Troy in an ambush but Troy ends up in a coma before they can learn the location of the bomb.  After unsuccessfully interrogating every member of Troy's gang, Archer reluctantly submits to a radical new procedure wherein his face will be removed and replaced with Castor's, allowing him to impersonate his enemy and infiltrate the maximum security prison where Castor's brother/accomplice Pollux is being held.  Archer's subterfuge fools Pollux, who reveals the bomb's location, but before Archer can arrange his release from prison, the real Castor Troy emerges from his coma, forces the surgeon to apply Archer's face to his, and then kills everyone who knew about the procedure.  The real Sean Archer is now trapped in prison as Castor Troy, while the real Castor Troy takes over Archer's life.

This is one of the most convoluted premises of any action movie I've ever seen, but somehow the filmmakers managed to pull a pretty entertaining piece of crap out of what probably should've been a disastrous effort.  So let's take a look at what worked and what didn't.

First and foremost, the two leads do an excellent job in this film of convincing the audience that a) this scenario is at all believable and b) that for most of the film's running time they are each playing the opposite character.  Travolta plays Archer as a spiritually broken man, haunted by the death of his son and consumed with catching the bastard who killed him.  His relationships with his wife and daughter are in shambles and the only thing that will bring him peace is taking Troy down.  Cage plays Troy as a high-wire act - oozing evil charisma and relishing his own depravity. 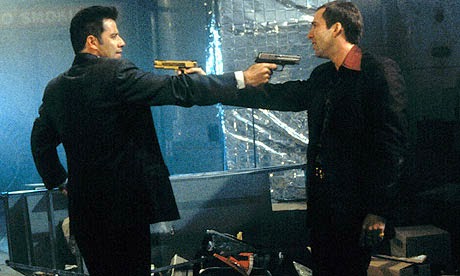 When the ol' switcheroo occurs, each actor gets to explore the other character.  Cage as Archer brings an even greater sense of melancholy and develops a rather tender relationship with Troy's girlfriend Sasha (Gina Gershon), while Travolta's Troy rekindles the romance with Archer's wife (Joan Allen), and is actually able to identify with Archer's troubled teenage daughter (Dominique Swain).  He also becomes an FBI hero when he locates and diffuses his own bomb and uses all the Bureau's resources to chase down "Castor Troy."  Both actors are fantastic in both roles and have a lot of fun imitating each other.

The film is full of memorable supporting characters.  The aforementioned Joan Allen is always excellent and plays Eve Archer as a woman exhausted from being the rock for her dejected husband.  Gina Gershon is strong as Troy's criminal girlfriend with a heart of gold.  Dominique Swain is quite convincing as Archer's wayward daughter Jamie.  And possibly the standout of the bunch is Alessandro Nivola as the slimy, waifish Pollux Troy.  No complaints about the secondary performances.

Where most action films sidestep the character-driven scenes in favor of mindless shoot-em-up drivel, Face/Off actually wedges in some memorable substance.  One of my favorite scenes is when Archer-as-Troy sneaks into the hospital where Eve works and has to convince her that he is actually her husband.  This is a touching, beautifully acted scene by both Cage and Allen, allowing both performers to demonstrate why they were cast in this action fare.

Also the implication that Archer and Troy may just be better suited for the other's lives makes for an interesting juxtaposition.  Archer-as-Troy is able to offer Sasha emotional support that the real Troy never could, and for a short time Troy-as-Archer is a better husband to Eve than the real Archer has been in years.


Now let's look at what doesn't quite work about Face/Off.

I felt this way when the film first came out, and the intervening years have made me appreciate the stock elements of action films less and less.  The positives of Face/Off are rather hobbled by the need to cram a certain quota of kinetic, stylized gunfight sequences into the running time, most of which generally consist of multiple parties senselessly shooting at each other and rarely hitting anything.  In the 80s this became the norm for most action films - the good guys would prodigiously obliterate every baddie in sight, while the bad guys would fire off impossible quanitities of ammo for ten minutes straight, destroying everything except the heroes.  After fifteen years of this stuff, Face/Off really doesn't hit any new notes in the firefight department.  These sequences were a chore to sit through and I found myself wishing they'd get back to the character interplay.  Overall I think this film would've worked much better as a suspense thriller, with the action kept to a minimum and more time spent exploring the character relationships.

Peppered throughout this movie are an absurd number of moments in which the Archer character gently strokes the face of a loved one with his whole hand, as a sign of affection.  He does it to his son at the beginning, he does it to his wife later (and she does it to him), he even does it to Troy's son!  It's a ridiculous, gimmicky mannerism that no normal person would ever exhibit.  Yeah, we get it - the movie's called Face/Off and this plays up the whole "face" theme.  Deep stuff guys.  Excuse me while I vomit.

One of John Woo's gimmicks as an action director is to show endless slow-motion shots of characters diving out of the way of gunfire while sparks rain down all over the place.  I'm not sure what universe Woo lives in where shooting a wall or a door or basically any background object results in massive amounts of sparks flying around.  It looks preposterous and I find it totally distracting.  Christ, there's a funeral scene in a beach chapel made entirely of wood - a gunfight breaks out and the sparks are just shooting out everywhere like it's the Fourth of July.  I'm no ballistics expert, but I'm pretty sure firing a bullet into a wooden pew would not produce this: 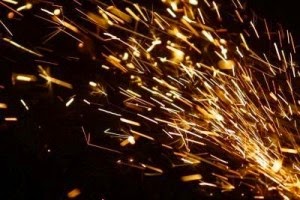 There's an action sequence where the fake Sean Archer leads a raid on Troy's apartment.  The fake Castor Troy and Sasha dive on top of Troy's son to protect him and they put his Walkman headphones over his ears to drown out all the gunfire.  The remainder of the scene consists of a slow-motion shootout, over which the filmmakers synced a trite, godawful cover version of "Over the Rainbow," by Olivia Newton-John.  This goes on for about six hours.  Jeezus kid, you're ten years old and your parents are hardened criminals - pop in a Megadeth tape or somethin', will ya??

-This has always bothered me - why in the hell does the title have a "/"?  This is not at all the correct punctuation.  "Faceoff" or "Face-Off" would've been quite sufficient.

-The face transplant surgery involves cutting around and removing the subject's face but inexplicably leaves out the ears.  Take a look at John Travolta and Nicolas Cage's ears - they look nothing alike!  Wouldn't this unbelievably far-fetched fictional surgery include the person's ears?  I mean they went so far as to duplicate hairline and body hair patterns but they left out a major identifying facial feature?


-After waking from his coma, Troy and his henchmen force the surgeon to perform the transplant surgery on him and transform him into Archer.  Would a genius surgeon really submit to coercion in performing such a complex procedure?  Couldn't he have purposely botched it, or at least left some kind of hint so Castor didn't quite look like Archer?

-As part of Archer's face transplant surgery, the medical team uses a laser to shave off Sean Archer's excess weight so he'll have Troy's lean, muscular build.  Then at the end when they put Sean's real face back on he goes back to being pudgy John Travolta.  What'd they keep Archer's body fat in a freezer until he needed it again?  Or was it injected into Castor's body during the second procedure and they were able to just suck it back out?

-More importantly, if Castor killed the surgeon after getting his transplant, how in the name of fuck did they restore Archer back to normal??

With Face/Off, John Woo manages to elevate a goofy, absurd premise and generic action stuff into a very entertaining popcorn movie that really has no right to be as good as it is.  The performances are all first-rate and the themes of identity and introspection are pretty well-explored.  In the hands of a stronger dramatic director this could've been turned into a fantastic thriller, but alas it can only ascend so high before being weighed down by tedious, overlong shootout sequences.  Still it was a solid entry in the rather overcrowded summer movie slate of 1997 and might be the last critical and commercial success for its two lead actors.


That'll do it for this edition - keep checking back at Enuffa.com for more Awesomely Shitty Movies!  And join us on Facebook, MeWe and Twitter!


Posted by Justin Enuffa Ballard at 8:50 AM