Welcome to another edition of Movies of Disbelief, here at Enuffa.com, where I examine a film that is generally either good, even great, or at least competently assembled, and point out one absurd flaw that had me throwing my hands up skyward. 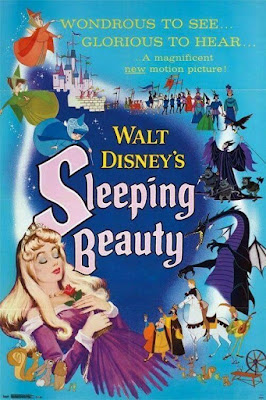 Today's subject is the Walt Disney classic Sleeping Beauty.  Released in 1959, Sleeping Beauty retells the timeless fairy tale about a lovely princess, cursed by an evil sorceress to fall into a sleeping death before the end of her sixteenth birthday (by pricking her finger on the spindle of a spinning wheel, of all things).  In the Disney version there are three good fairies who vow to protect Princess Aurora from this fate, by keeping her hidden from the wicked Maleficent until the timeline of said curse has passed.

**Side note: each fairy bestows a magical gift, the first being Flora's decree that Aurora will grow up to be beautiful, begging the question, does Flora not have any faith in this girl's gene pool?  I'd be insulted if I were her parents.  "Excuse me, I think we're both fairly handsome people, she'll turn out just fine on her own!"  Seems like a waste of a gift if there's even a chance that she'll be a looker anyway.  Come to think of it, so is Fauna's gift of song; how does she know this girl won't naturally have musical ability?  Or at least enough to get by with some practice?  Superficial jerks...**


But back on the clock; the fairies quickly whisk her away to a remote cottage in the forest and raise her as a common peasant girl until such time as it's safe for her to return and reclaim her royal heritage.  Solid plan right?  Especially since the fairies have also vowed not to use magic during the girl's upbringing, so as not to rouse suspicions of passers-by.  Princess Aurora, or Briar Rose as she is now known, has no awareness of her regal bloodline or the fact that she is betroathed to Prince Phillip of a neighboring kingdom.  On her sixteenth birthday, the fateful day in question, she meets a stranger in the woods and falls instantly in love, but the fairies spill all the beans, revealing to her that not only is she a princess, she is already spoken for and must never see this strange man again (of course none of the four is aware said stranger IS Prince Phillip).  Rose is crushed at the news and runs to her room sobbing.

Now, before I get to the plot point that has my goat, let me make it clear that Sleeping Beauty is one of my favorite classic Disney cartoons.  It's beautifully animated, aesthetically inspired by medieval paintings and boasting lush, incredibly detailed backgrounds and landscapes.  Briar Rose herself looks a little too 1950s teenager to me, her golden tresses held back by a hair band that seems totally out of place in this period.  Plus her eyes are supposed to be blue but in nearly every shot they're drawn as black dots (like every other character in this film - economy of animation I suppose).  But nitpicks aside, this movie is visually gorgeous, I always loved Maleficent as a villain, and her showdown with Philip at the end is boss, as she casts a forest of thorny vines in his path before morphing into a gigantic dragon.


So here's where I begin to have problems with this film, and it's kind of a compound suspension of disbelief issue.  Keep in mind, this is in a movie about MAGICAL FAIRIES.

Maleficent's curse explicitly states "Before the sun sets on her sixteenth birthday, she will prick her finger on the spindle of a spinning wheel, and die."  Why a tiny pinprick on one's finger would instantly kill a person, I'm sure I don't know.  Must be rusty.  Good fairy Merryweather then amends the spell to say she won't die, she'll just fall asleep until true love's kiss awakens her (Ya know, that old chestnut).  That's all well and good.  Fine.  So to recap, the fairies need to keep her safe, UNTIL AFTER THE SUN SETS ON HER SIXTEENTH BIRTHDAY.  After.  Got that?  It's literally their one job, for that precise length of time.  And they've taken such care to this end that they've fully abstained from using magic, for sixteen years.  But on her actual birthday they decide to throw her a celebration by making her a dress and a birthday cake.  Only problem is none of them knows how to sew or cook.  So hold up though, how have they been feeding this girl for sixteen years?  Has she been living on nuts and berries this whole time?  Did she learn to hunt?

But whatever, okay, so they can't cook and they need to use magic to make the gifts.  And they're so careful about it they close the windows and plug up every hole in the cottage so none of their magic dust (or whatever that's supposed to be) will seep out and become visible to the outside world.  But then Flora and Merryweather get into such an epic pissing contest about the color of the dress they're making ("Make it blue!" "No, pink!"), that they each unleash a barrage of magic wand rays (or plasma, I'm not sure the physics of magic wand emissions), which ricochet up through the fireplace flu (Didn't think to close that, did ya, dipshits?) and are spotted by Maleficent's loyal raven.  So the jig is up, the bird knows where this brat's been hiding the last four Presidential terms and flies off to tell his boss.  But even that wouldn't necessarily be a game-changer, what with Rose still being under the fairies' protection.

No, what sends everything careening straight to fresh Hell is when, per their plan all along apparently, they bring her back to her parents.....BEFORE SUNSET.  Yeah, that's right.  They've kept her hidden for sixteen years, waiting out the exact, definitive deadline of Sunset On Her Sixteenth Birthday, only to bring her home and back into the public eye just BEFORE said deadline.  Sooo, ummm, why wouldn't you wait until nightfall, or hell, THE NEXT DAY, to bring her home?  And just to keep up the charade, why not tell her this whole time that her birthday was the day after?  That way you'd a) maintain the subterfuge from her until it no longer mattered, and b) your use of magic would've been moot, since the statute of limitations on Maleficent's spell would've already expired.  This is like being ahead by a field goal with thirty seconds left on the clock and going for a Hail Mary instead of just taking the knee.  Or being half a lap ahead in the anchor leg of a relay and stopping to tie your shoes.  It's a fuckin' run-out-the-clock situation.  Just wait a couple more hours, for fuck's sake.  But no, instead they bring Rose home to her parents just before sunset, and then because she's so distraught about never being able to see her strange suitor again (or so she thinks), the fairies LEAVE HER ALONE IN HER ROOM, where Maleficent, now aware of her location, hypnotizes her and lures her up to a waiting spinning wheel, where of course the horrific prophecy comes true.

I know, I know, had the fairies behaved with even a modicum of common sense this movie would've been pretty dull (although Maleficent could still have unleashed some new spell after her first one elapsed and we still could've gotten the badass climactic showdown with Phillip).  But Jesus H. Christ, how stupid can a character be to flout fate like that instead of having just a scant sixty minutes more of patience?  You made it exactly fifteen years, eleven months, 29 days and 23 hours.  Suddenly you urgently need to bring her home to her parents, just before the clock is about to strike zero?  I'm glad I didn't have money on this game; this reeks of a fuckin' bag job!

There's nothing worse in fiction than a protagonist whose utter stupidity is required in order for the plot to move along.  Figure it out, Walt!

Posted by Justin Enuffa Ballard at 8:31 AM