Welcome to another edition of Enuffa.com's Awesomely Shitty Movies, where I pick apart a beloved cinematographical (is that a word?) feast and shatter its aura of watchability for everyone.  I'm probably overestimating my influence, but you get the idea. 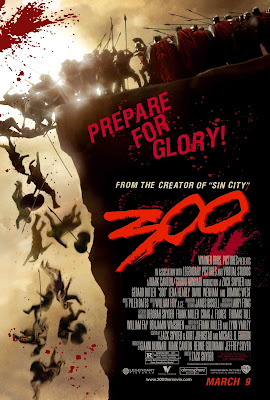 Today I'll be dissecting the 2007 battle epic 300, directed by Zack Snyder and based on the graphic novel by Frank Miller.  300 recounts The Battle of Thermopylae, where the Spartan King Leonidas, along with 299 of his ruthlessly tough soldiers, stood against a massive Persian army led by King Xerxes.  And, well, that's it.  That's the entire plot of the film really.  In flashback we learn that, like all male Spartan children, Leonidas experienced a childhood of intentionally-inflicted cruelty designed to harden him, that he might one day be a great king and soldier.  There are also subplots involving a corrupt religious cult called the Ephors, who order Leonidas not to move against the Persians, plus one of the Spartan Council is revealed to be in Xerxes' back pocket.  Other than that though it's basically an extended two-hour battle sequence.

So what are the pros and cons of this Frank Miller-inspired film?  Let's take a look, because.....THIS! IS! ENUFFA!!!  See what I did there?

Like Robert Rodriguez did with Sin City, Zack Snyder took Frank Miller's stunning comic book panels and recreated them for the screen, assembling an almost shot-for-shot adaptation that looks absolutely gorgeous.  The colors are almost exactly like the graphic novel, the characters have been brought to life in painstaking detail, and the action is stylized to reflect the over-the-top movements depicted in the book.  The film adaptations of both Sin City and 300 proved to be very influential in creating these impossible comic book worlds.  If you're going to make a CG-heavy film, this is how you do it.

As I said above, the combat is heavily stylized to echo Miller's drawings and give the characters and events a sort of mythic quality.  The blood and gore are turned way up as well, mimicking Miller's explicit visual approach.  It's a good thing the battle sequences work so well, because this film has a lot of them.  A LOT.

Snyder has literally translated Miller's artwork in the costume department as well.  All the characters are dressed exactly like their two-dimensional counterparts, and they look great.

There's a theme going on here - when it comes to the visual aspects of the film, everything is first-rate.  The special effects and makeup are no different.  Snyder uses CGI not as a substitute for reality, but as a way to heighten and distort reality.  The backgrounds are murky and flat, bathed in yellows and browns, just as Miller drew them.  The Spartans all have CG-enhanced six-pack builds and brandish perfect bronze shields.  But when practical effects were called for, Snyder used traditional prosthetics as well.  The Ephors are wart-covered and repulsive, the deformed Ephialtes is a grotesque hunchback, the Executioner is an enormous, clawed being resembling the Cenobites from Hellraiser.  The makeup and effects perfectly capture Miller's bizarrely-rendered characters.

Hey, I'm a Fassbender fan.  A Fassie fan.  A Fass-natic, if you will.  Any film Michael Fassbender appears in is improved by his presence.  While his role in 300 is fairly small, he does get one of the more memorable lines, when one of the Persians threatens, "Our arrows will blot out the sun!" Fassie replies, "Then we will fight in the shade."  Yeah, you tell 'em Fass!  Incidentally, 300 was the first movie I saw him in.

Remember the synopsis I provided above?  Yeah, I wasn't kidding.  There's essentially no story to this film.  Partly that's just how Miller's book is.  It's an exercise in style, not meant to be taken as an intricate piece of storytelling.  While that works pretty well for an oversized graphic novel, it gets a little tedious when presented in movie form.  Sure, there's the subplot of Theron, the Spartan councilor who's on the take and tries to sabotage Leonidas's quest (but not before banging the Queen), but that stuff doesn't take up much screen time.  This movie is just a shade under two hours, probably 90 minutes of which is comprised of battlefield carnage, which becomes numbing after a while.

The characters also don't come across as real people at all; they're archetypes with little-to-no dialogue, which gets confusing when all the protagonists look pretty much the same.  Christ, even their weapons and militaristic roles are identical.  At least in most comic book stories the characters can be easily identified by their costumes and super powers.  In this movie every Spartan looks the same except Leonidas, who is set apart from his men because he has short hair.

Look, I know this is a very amplified interpretation of historical events and all the heroes look and act like they're on steroids.  I get that these performances are going to be operatic at best.  But Jeezus, take it down a notch.  Even in the book these characters aren't depicted as yelling every single line of dialogue.  Take the "This is Sparta" bit.  In the book, Leonidas says it coldly to the Persian messenger before kicking him into the well.  In the movie he yells it at the top of his lungs, inserting a slight dramatic pause between each word.  It just sounds ridiculous.  The acting is more often than not unintentionally funny, which kinda took me out of this staggeringly realized fictional universe.  If I can't take the characters seriously I can't get wrapped up in the story.

Of course the biggest offender in the acting department is the marginally-talented-at-best Gerard Butler.  I don't get it, folks.  How does this guy get so much work?  Even for an action hero his acting is bad.  Butler makes Stallone look like DeNiro.

Upon its release, 300 was the source of much controversy due to its portrayal of the Persian characters.  Besides supposedly being a "democracy vs. tyranny" parable (pretty questionable given how fascistic the Spartan society is), King Xerxes is shown as effeminate and probably gay, and I don't recall that being the case in the book.  In the movie there's actually a scene where he rather blatantly indicates a physical attraction to Leonidas, and I'm not sure why this needed to be in the film.  Were the filmmakers so desperate to appeal to the macho asshole portion of the audience they felt the need to exploit their homophobia as well?


Not to mention the supposed heroes of the film are scarcely likable themselves.  The Spartan philosophy of child-rearing is apparently "If the kid can't survive a giant wolf attack by age 8, he isn't worthy of reaching adulthood."  That's a little harsh, fellas.  I get that these kids are meant to be part of a standing army but Christ, aren't we supposed to be rooting for you?  Leonidas is also pretty mean to the deformed dude, who just wants to aid the Spartans and reclaim his birthright.  Leonidas's reasoning for rejecting him is sound: if you can't hold up a shield, you create a weak spot in the formation, but couldn't he offer the guy an office position at least?  He's presenting you with valuable strategic information, man!  I guess that comes back to bite the Spartans in the ass, when Ephialtes defects and informs Xerxes about the secret rear entrance to the Hot Gates (That's one of the filthiest sentences I've ever typed).  So maybe it's meant to be a lesson - be kind to people trying to help you, even if they look like Sloth from The Goonies.

-One of the most famous scenes is of course "This! Is! Sparta!" where Leonidas kicks a Persian down a gigantic well right in the middle of the city.  This vast, gaping hole seems like a real safety hazard - there's no ropes, no railings, no sign saying "Watch Your Step, This Is a Spartan Well."  Way to keep your children safe, jerks.

-Late in the film Xerxes sends a battalion equipped with elephants to destroy the Spartans.  Bulky, clumsy elephants which are supposed to navigate this rocky cliff terrain.  Predictably the Spartans knock over one of the elephants and they all fall off the cliff like dominoes.  Probably not the best battle plan for this setting, Lip-ring Boy.

-The 8-foot tall Xerxes is adulated like a god by his followers, and the filmmakers felt he  needed to sound somehow otherworldly.  So they altered actor Rodrigo Santoro's voice to make it deeper.  But now he just sounds like one of those witness protection interviewees, whose face is bathed in shadow.  Is Xerxes even his real name, or is he actually a Goodfella?

-During the battle, Xerxes is shown sitting on a massive (and I mean MASSIVE) throne, complete with a grand staircase.  This structure is easily 25 feet wide and must weigh a couple tons.  It's so heavy it has to be carried by about a hundred people.  What a terrible waste of resources.  I know your forces outnumber the Spartans exponentially, but fuck, is that really the best use of several DOZEN of your men?

-This one's unfair, but Gerard Butler's lisp really bugs me.  It's so distracting and his lip moves in a really odd way when he speaks.  Kinda like Alicia Silverstone, whose lips seem to move as though independent from the rest of her face.  Given how selective and unforgiving Spartan fathers were, I'm surprised Leonidas wasn't tossed in the river once his dad discovered his inability to pronounce the letter S.

300 is one of those movies you should only watch one time.  The first time I saw it I was blown away by the visuals and its faithfulness to the comic.  Zack Snyder used the template pioneered by Robert Rodriguez to convert Frank Miller's 2D art into a 3D canvas populated by mythic characters and visceral action, and I was duly impressed with his interpretation.  But then I watched it a second time and realized how little substance the film has.  There are many films that could be deemed an exercise in style, but 300 is literally all sizzle and no steak.  The characters are one-dimensional, the plot is basically just one long fight scene, and there isn't even anyone to root for.  Snyder would top himself by a country mile with 2009's Watchmen, and then return to his roots with the dreary, cynical punch-fest Man of Steel.  I guess for a first foray into comic book films, 300 is a pretty good demonstration of Snyder's ability to reconstruct the source material on film.  Compositionally it's a beautiful picture, it's just a picture of something not very interesting to look at.


That's it for this edition of ASM.  Come back next time and I'll ruin some other movie for ya!