All In: Cody Rhodes Pulls Off a Coup 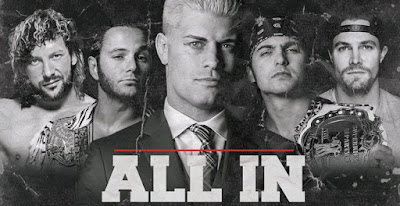 Well I wasn't sure what to expect with All In.  I was pleasantly shocked when it sold out in under an hour and really happy for Cody and The Young Bucks for actually pulling off such a feat; the biggest-selling non-WWE show since WCW.  But would the show deliver with such an eclectic roster and matches that were mostly inconsequential in the traditional sense?  Turns out, yeah.  It delivered big.  And all that variety worked in the show's favor.  Lucha spotfest?  Check.  ECW-style hardcore match?  Check.  Traditional old-school wrasslin'?  We got it.  NJPW match?  You bet.  Dream match spectacle?  Sure.  Comedy match?  Yup.  I can't remember a show that pulled off so many divergent styles so well.  All In took a little while to really get going, but from the fourth match on there was nothing below ***1/2.  I didn't see any MOTY candidates, but the last six matches for me either approached or exceeded four stars.  When was the last WWE PPV that accomplished that?

Anyway, let's get to it.


Things kicked off with Matt Cross vs. MJF, a fun if superfluous little opener with Cross showing off his acrobatics and MJF doing good character work.  Cross won in nine minutes with his shooting star press.  A nice bit of fluff to warm up the crowd.  **

The weakest match on the show for me was Christopher Daniels vs. Stephen Amell.  This was okay, especially considering Amell's inexperience, but wasn't quite as tight as it could've been.  Amell clearly loves doing this and has picked up the basics strongly, and wants to be taken seriously as a wrestler.  If nothing else you have to applaud his enthusiasm.  There were a few miscues and Daniel's BME was off the mark both times, but this was fun.  Amell did a couple big moves, a coast-to-coast dropkick a la RVD, and a missed elbow through a table.  This should've been a little shorter but it wasn't bad.  Daniels picked up the win on the second BME.  **

The lone women's match featured Tessa Blanchard (who has the same "it" factor as Charlotte Flair), Chelsea Green, Madison Rayne, and Britt Baker, in a sprint with slightly messy action in the first half, but that gelled pretty well in the second when everyone started hitting their big moves.  It was a tad unwieldy but an easy match to watch overall.  The finish was kinda out of nowhere as Tessa hit the hammerlock DDT and barely got the pin before it was broken up.  **3/4

The first big match of the night was Nick Aldis vs. Cody for the NWA Title.  Pretty shocking how early this went on considering Cody was the mastermind behind this show.  With cornermen on both sides and Earl Hebner doing formal ring instructions, this felt like a big-fight main event.  As a match it was very good, heavy on the sports-entertainment with DDP getting involved, Cody teasing being unable to continue after being busted open by an elbow, and Brandi diving on top of Cody to protect him from a top-rope elbow drop.  But the storytelling was strong, with Cody playing the babyface in peril to perfection and going on to win the big one for his dad.  It was a nice moment to pay off a swell old school NWA Title match, and the crowd really made it feel special.  ***3/4 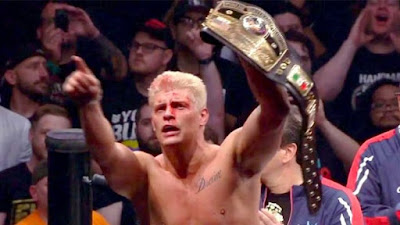 The big car wreck match on this show was Hangman Page vs. Joey Janela in a Chicago Street Fight.  First off, Janela impressed me with his fearless athleticism, and of course Page is one of the more promising rising stars in the business.  These two worked in tons of plunder, including some brutal ladder spots (a Burning Hammer across the steel from Page was pretty cringey), and Janela's valet Penelope Ford got involved, taking Page down multiple times with some big moves (she is quite impressive).  After twenty minutes Page won with the Rite of Passage off the ladder through a table, which looked insanely dangerous but on the replay it was clear Page kept it pretty safe (if such a thing can be safe).  This was a super fun hardcore-style match and both guys looked great.  Post-match was of course the resurrection of Joey Ryan (who was "murdered" on an episode of Being the Elite), complete with penis-shaped druids.  Ryan "attacked" Page with his junk and superkicked him to end the segment.  What a silly gimmick.  ***3/4

Next up was the ROH Title match, with Jay Lethal defending against Flip Gordon (who won the pre-show battle royal).  Man, was this entertaining.  Lethal was interrupted on his way to the ring by someone off-camera who handed him Macho Man shades, and he morphed into Black Machismo, aping all of Savage's mannerisms as he used to do in TNA.  The mystery person turned out to be Lanny Poffo, who had borrowed from a collector a legit Macho man coat.  Thus the first few minutes of the match quoted stuff from Savage-Hogan and Savage-Steamboat.  Since Flip Gordon had Brandi Rhodes in his corner, Lethal kept "mistaking" her for Elizabeth and either moving her to his corner or hiding behind her to avoid Gordon.  My favorite spot was when she ran into the ring to get away from him and he picked her up and put her on his shoulder, a la WrestleMania IV.  Hilarious stuff.  From there she tapped his shoulder and he reverted back to Jay Lethal, and proceeded to have an ROH-style match with lots of fun athletic spots.  Toward the end Lanny tapped his shoulder again to bring back the Macho Man, and Lethal hit Gordon with three consecutive top rope elbows, which Gordon no-sold Hogan-style.  Gordon hit a big boot and teased a legdrop but Lethal came back and hit Lethal Injection for the win.  Post-match Bully Ray attacked both guys but was stopped by Colt Cabana before being powerbombed through a table.  Just an insanely fun match.  ***1/2 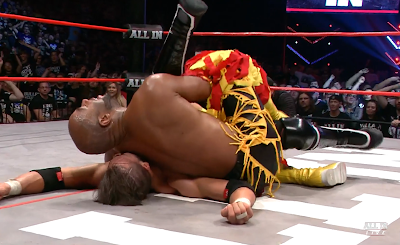 Match of the night honors went to Kenny Omega vs. Pentagon Jr.  This had the big dream match feel to it and the crowd was white hot going in.  These guys had a fantastic 17-minute match with loads of counters and teased finishers, building to a fever pitch as Omega took two brutal-looking package piledrivers (one on the apron) before delivering one of his own, followed by multiple V-Triggers, a reverse 'rana, and the One-Winged Angel for the win.  It was clear going into this that Omega was winning but in both this and the Okada-Scurll match they made you believe for a few moments that it might go the other way.  After the bell the lights went out and when they came back on "Pentagon" attacked Omega, ultimately hitting him with a Codebreaker and pulling off his mask to reveal Chris Jericho underneath.  Jericho took the mic and simply said "See you on the Jericho Cruise!"  Pretty excellent spectacle of a match.  ****1/4 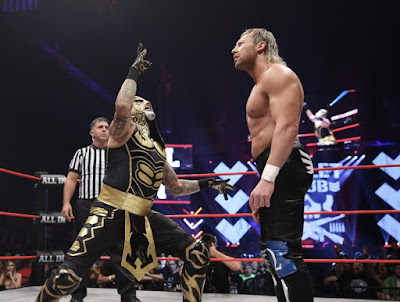 Coming in a very close second was Kazuchika Okada vs. Marty Scurll.  On a show full of variety this was the closest thing to a NJPW-style match, building slowly and dramatically over 26 minutes (It was originally slated for 14).  The first half could probably have gotten going a little faster but the second half was superb, with lots of reversals and near-falls.  My favorite moment was Okada trapping Scurll in the position for a Rainmaker but pausing to mock him with a "205" hand signal, which gave Scurll time to grab his fingers and snap them apart.  Okada played the arrogant heavyweight who didn't take his smaller opponent seriously for much of the bout.  Scurll proved himself a worthy opponent, nearly putting Okada away with his own Rainmaker and the crossface chickenwing, but in the end Okada hit the original Rainmaker for the win.  Helluva contest.  **** 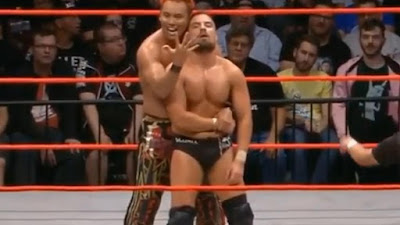 Sadly the main event six-man tag was severely limited by the remaining airtime (It was scheduled to go over twice as long as it did), but Kota Ibushi and the Young Bucks vs. Rey Mysterio, Rey Fenix and Bandido made the most of the twelve remaining minutes, delivering the best sprint you're ever likely to see.  This was non-stop lucha action with bodies flying all over the place and high spots galore.  I'd love to have seen this go five more minutes, as the finish was very rushed (The Bucks put Bandido away with a Meltzer Driver), but this was crazy fun.  ***3/4 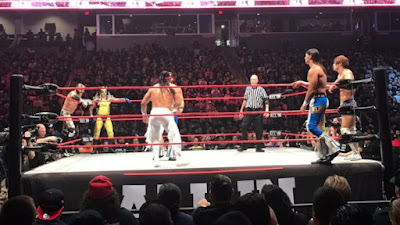 Not only was All In historic, but it demonstrated how to do a proper sports-entertainment PPV.  There was something for everyone, all the matches were different, the use of legends was done to both please the crowd and get the younger talent over, and it was very obvious everyone, talent and audience, were having a blast.  Contrast that with your average WWE PPV, where the crowd either sits on their hands or protests because they aren't getting what they want, and the wrestlers often seem unmotivated or unhappy.  If a show like All In doesn't make WWE and its loyalists see that there's a viable alternative out there, I'm not sure what will.  This wasn't a sports-heavy pro wrestling event like New Japan puts on, it was a "sports-entertaining" variety show done so much better than WWE does it, in front of a rabid, sold-out crowd.  Cody, Kenny and the Bucks are on to something big, and I hope they stay the course and see it through.


Best Match: Kenny Omega vs. Pentagon Jr.
Worst Match: Christopher Daniels vs. Stephen Amell
What I'd Change: Cut the Amell match down to nine minutes, cut the Okada match down to 21, and give the extra seven minutes to the main event
Most Disappointing Match: Probably the main event since it was so short, but it was still awesome
Most Pleasant Surprise: I guess Page vs. Janela
Overall Rating: 8.5/10


Posted by Justin Enuffa Ballard at 10:53 AM