Welcome one and all to the fifth edition of Awesomely Shitty Movies, here at Enuffa.com!

Since last installment dealt with the Back to the Future sequels, I thought while we're on the subject of time travel movies, why not examine the tremendously entertaining but pretty terrible Jean-Claude Van Damme vehicle Timecop? 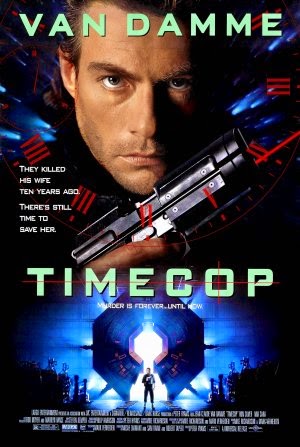 Timecop was released in 1994 and stars the aforementioned Van Damme as Max Walker, a police officer for the futuristic government agency known as the Time Enforcement Commission.  See time travel has been invented and predictably exploited by criminals for either financial gain or to alter the timeline to their advantage, necessitating the formation of the TEC.  Walker stumbles onto the case of Senator Aaron McComb (Ron Silver), who has become head of the Commission and is abusing his position by stealing money from the past to fund his future Presidential campaign.  What follows is a pretty intriguing-but-not-good sci-fi action thriller as Walker travels back and forth between 1994 and 2004 to thwart McComb's plot and retroactively prevent his own wife's murder at the hands of McComb's agents.

The movie was directed by Peter Hyams (who helmed the Sean Connery sci-fi western Outland, as well as the sequel to Stanley Kubrick's 2001) and is loosely based on a comic book story.

As I said last time, I'm a sucker for time travel stories.  I find the whole concept fascinating and by using that as a backdrop there's instant sci-fi credibility in my book.  Of course it's also a very delicate line to walk, given how easily a plot-unraveling paradox can ruin the film.  But as long as the characters are interesting and the overall story works, one can forgive a certain degree of time-travel plot holes.

In Timecop we see the villains traveling back to the Civil War era and the Great Depression to take advantage of lesser technology and a vulnerable economy, respectively, coming away with a fortune.  Even though these scenes were brief, I enjoyed seeing these different time periods depicted and found the thievery inventive.  We also see the main villain McComb interacting with his younger self to alter his own future, and we see the hero Walker trying to evade the baddies while trying not to be seen by his own younger self, lest the timeline be unnecessarily tampered with.  This is all neat stuff.

The action scenes in this film are very well done.  Van Damme's athletic ability is cleverly used without feeling like a forced kickboxing exhibition.

This being the early days of modern CGI, the computer-generated stuff is pretty archaic, but otherwise the special effects are solid.


While no great actor by any means, Van Damme is perfectly believable as the emotionally scarred, world-weary 2004 incarnation of Walker.  After losing his wife ten years earlier he now lives alone and is married to his work, becoming the ace timecop on the force.  Van Damme projects the right level of melancholy and incorruptibility, so we both feel for him and admire his veracity.  The occupation of a TEC cop would certainly afford a person ample opportunity to go into business for himself (or for someone else), as Walker's partner does early in the film.  But Walker stays true to his profession until late in the movie when his mission and his past life intersect.  There's even a sense of conflict as Walker is torn between maintaining the integrity of the timeline and saving his wife from death. 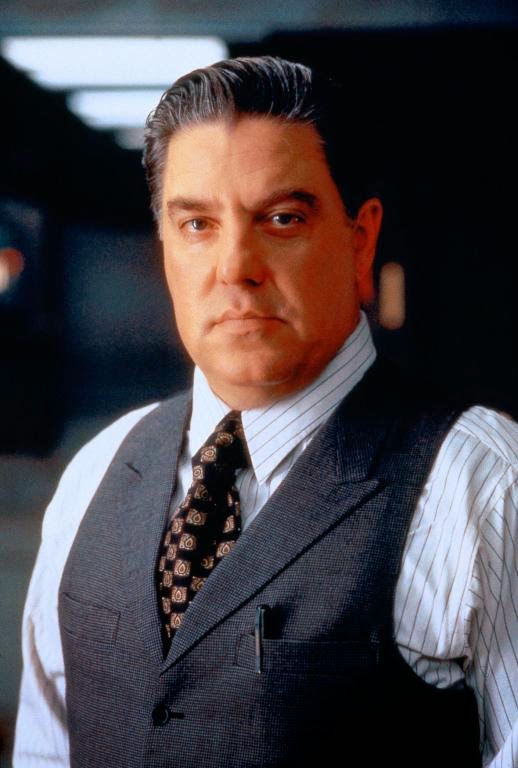 This veteran character actor from such movies as...well, everything (seriously, this guy's been in an absolute shit-ton of films, many of them good) plays Walker's buddy/boss Matusak.  McGill always brings a down-home likability to his characters, even when they're scummy.


The late Ron Silver is spectacularly slimy as the corrupt Senator McComb, embodying a tremendous combination of oily salesmanship and rather cowardly menace.  Most action films are only as good as their villains, and fortunately for this one Silver is first-rate.


2004 Walker is sporting just a fantastic coiffe in this movie.  It's essentially a mullet but with a European sophistication.  Simply amazing.

One of the major premises of this movie is that, should one's past self meet his future self, they aren't allowed to make physical contact or it creates some kind of temporal rift that results in both selves being wiped from existence.  Huh??  So if I understand this correctly, Old McComb telling Young McComb not to sell his stake in a burgeoning software company in 1994 so that in 2004 he'll be fabulously wealthy creates no rupture in the space-time continuum, but should they simply shake hands they're both dead.  That makes less than zero sense.  To compound this logic hole, the only explanation provided for this phenomenon is "same matter cannot occupy same space."  Wait, what?  That makes it even more confusing!  Same matter by definition DOES occupy the same space, ya jackasses.  It's different matter that can't occupy the same space.


So of course in the movie's climax, Walker arranges it so both versions of McComb are in the same room, and ends up shoving one into the other, erasing them both from being.  I'm not sure there's ever been an instance of a primary movie villain being killed off by a more false premise.  McComb dies essentially for no believable reason.

Oddly in this universe time travel is possible, but only if you're going to the past.  Got that?  A person can travel back in time, but going into the future can't happen because "the future hasn't happened yet."  By that rationale, if one were to travel from 2004 back to 1970, they've already in some miniscule way altered the timeline, thus making 2004 an alternate eventuality.  So at that point shouldn't traveling back to 2004 now be impossible because that version of the future hasn't happened yet?  I get why the filmmakers limited the time travel only to the past, as it simplifies the parameters of the story.  But jeezus, come up with a more plausible storyline justification, will ya?

-The time machine in this movie takes the form of a high-speed car (hmm, that sounds familiar) that gets propelled toward a wall before disappearing into the past.  Only problem is once the time traveler arrives in the past, the car has mysteriously vanished.  Like the person just appears out of thin air, sans automobile.  Umm, what the hell happened to the car??  Did it just get stuck in temporal Limbo?  What's worse is, to return to the present time they simply have to press a button on this little handheld device (how come they can't do that in the first place?), and upon re-entry they're back in the car again.  Did the various film production units not talk to each other when making this cinematic turd?  "Hey guys, we finished the scene where Walker takes the time car to 1929."  "Wait, 'time car?'  'The fuck are you talkin' about, he just has to press the button on his little time pager."  "'Time pager??'  No no, he has to get shot out of a hydraulic cannon in a futuristic car.  He has to hit 88 MPH so the flux capacitor can kick in."


-At the end of the movie Walker returns to 2004 and everything is peachy.  McComb mysteriously disappeared ten years ago, all of Walker's friends are alive again, and his wife's death has been prevented, allowing her to give birth to their now nine-year-old son.  Only problem is, there are now two Walkers walk--- er, strolling around in 2004.  Remember, 2004 Walker went back to 1994, saved his younger self and his wife, and then left 1994.  So now 1994 Walker and his wife have had a child and grown ten years older.  When 2004 Walker returns to his own (now altered) time, his formerly younger self is there now too.  So what are we supposed to do with this extra Jean-Claude that's hangin' around?  I'd suggest a threesome but "same genitalia can't occupy same space."

Timecop is essentially a B-movie with A-grade special effects and production design.  It's eminently entertaining, but the producers clearly had no idea how to tell a story about time travel.  There are just way too many paradoxes and truck-sized logic holes.  Look I get it, time travel can be an unwieldy plot device - using it in any kind of story invites all sorts of gaping narrative voids.  But you really hafta sit down and work these things out before you approve the script, or the whole film collapses on itself and takes the viewer right out of the experience.  If we can't even make sense of why the main bad guy just morphed into a pulsing, gelatinous CG blob it really kinda ruins the climax of the movie, doesn't it?  In the hands of a more accomplished director like James Cameron, Timecop could've been a real gem.  Unfortunately it never ascends past being a good piece of crap.


That's it for this week's ASM.  Stay tuned for more obsessive cinematic scrutiny here at Enuffa.com!