Welcome to another edition of Movies of Disbelief, where I talk about a film containing plot elements I find simply not credible.  Today it's Ridley Scott's latest entry in the Alien franchise..... 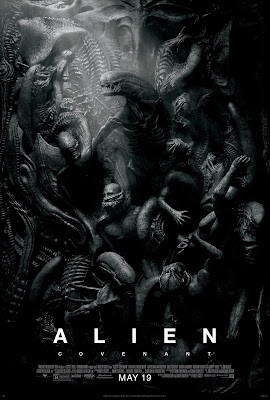 Alright, time to talk about some issues I have with Alien: Covenant.  I'm a diehard fan of the Alien series and-- well wait, I guess I'm a diehard fan of the first two Alien movies and that's it.  Oddly, despite being a huge Alien fan I think the vast majority of these movies suck.  Covenant is sadly one of them; like Prometheus there's a good film in here somewhere but they didn't find it.  There's basically no point to Covenant at all, except as a stopgap between the events of Prometheus and the events that led directly to the original Alien (events which aren't at all necessary to understanding or appreciating the classic first film).  Covenant is basically just a way to get us from the monster introduced in Prometheus to the familiar xenomorph we know and love.  Super, David experimented with these creatures until he got this one.  Did we really need a two-hour Alien's Greatest Hits movie to arrive at the xenomorph?  Covenant relies so heavily on tropes from the other films in the franchise there's nary an original sequence to be found here.  Except maybe the one robot teaching the other robot how to play the flute.  Spiffy.


So despite being a gorgeous-looking and well-acted film I consider Covenant (and Prometheus) to be a pretty pointless attempt at creating a backstory for a great film that never needed one.  I had my share of nitpicks about this movie to boot, but there's one item in particular that flat-out pissed me off, one piece of information that makes exactly zero sense and undermines the only narrative thread that even remotely justifies the film's existence.

Before we get to that though, a few minor gripes:


-In the first scene we see the android David conversing with his creator Peter Weyland.  Weyland lets him choose his own name and he goes with David because Weyland's sitting room has a giant statue of David that's so tall its head goes up through a hole in the ceiling.  Why the hell would you ever put a statue in your living room that you can't see all of?  Legit, unless he's standing right under it, Weyland's only view of this statue is obstructed in such a way that he can't see the head!  Before agreeing to purchase this piece of art he probably should've brought a tape measure.

-This annoyed me in Prometheus as well, but if this film takes place years before the original Alien, why is the technology SO much more sophisticated?  The ship in the first film had old-fashioned CRT monitors with crude graphics and clunky interfaces.  This ship from years earlier has high-def flat-screen monitors and 3D virtual mapping capabilities.  Could Ridley not make ANY effort to have the tech gel with the original film?  This shit is "Star Wars prequels" glaring.  By contrast look at Blade Runner 2049, where everything matches the aesthetic of the first movie - director Denis Villaneuve made sure that the advances in technology depicted in the sequel were consistent with THAT universe as opposed to ours.  That there is attention to detail.

-I find it odd that the Covenant was heavily stocked with firearms when the Nostromo was not.  Either it's standard procedure to have guns aboard your ship or it isn't.  Pick one, dudes.

-What kind of glass are we to assume they use for the windows on these vehicles?  The xenomorphs are able to easily smash through every window they come in contact with.  Surely the exterior windows on any vehicle involved in space travel or planetary exploration would be nigh indestructible, no?


-When we are reintroduced to David halfway through the film, not only is his head back on his body (Wasn't he just a head at the end of Prometheus?  Did Shaw bring his whole body with her?  And how'd she know how to fix him?), but he now has long hair.  Wait, robots can grow hair?  Since fuckin' when?


-And finally, how fucking obvious was the reveal at the end when what we thought was Walter (the good robot) was actually David (the bad one)?  As soon as they cut away from the Walter-David fight without showing how it ended, and Walter later returned to help the good guys get back to the ship I said to myself "That's not Walter."  Gotta be the most telegraphed plot twist of all time.  Like, shovel-to-the-face obvious. 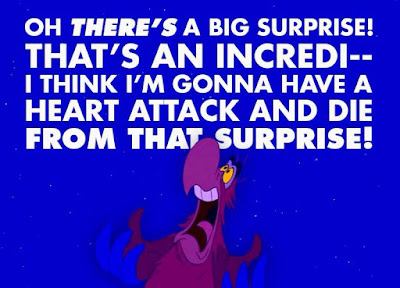 Okay, enough minor issues.  Here's my major problem with this movie that, as I said, undermines the one narrative device that actually served a purpose.

We find out that David has been experimenting with the alien creatures unleashed in Prometheus, going so far as to use Dr. Shaw's body as a host so he can create the "perfect organism," the xenomorph to whom we were introduced in 1979.  Now just as a reminder, the xenomorph's life cycle begins with a large egg, out of which jumps a spider-like facehugger that attaches to a host's face long enough to lay an embryo in its chest.  Then several hours later a monster bursts out, killing the host, and eventually grows to enormous size.  Such is the life cycle of David's perfect creature.

Hold up though, early in this film two of the Covenant's crew members unwittingly walk near these small eggs on the ground, which release into the air tiny black spores that burrow in their ear canal and nasal passages respectively, and only minutes later a xenomorph-esque creature bursts out of one guy's back and another guy's face.  This whole process takes literally minutes.

So we're supposed to believe that the intrusive, hours-long reproductive cycle of the xenomorph is more perfect and efficient than its predecessor's, which can enter the host's body completely undetected and gestate into a chestburster within minutes?  Fuckin' HUH??  Let's release both of these species on a planet together and see which one multiplies faster.  Sure the full-grown xenomorph is probably a more durable and efficient killer than its ancestor, but David's statement about it being a perfect organism falls down immediately when you compare its mode of reproduction to the neomorph's.  One requires a host to either peer stupidly into a newly hatched egg or hold still long enough for the facehugger to attach, the other simply requires the host to be anywhere near the mini-eggs and breathe in.  I call bullshit, robo-douche!  Your "perfect organism" is a sham!  By messing with its genetics you actually made it LESS efficient.  This strangely mirrors the technology nitpick; the earlier version of both the aliens and the computers was more advanced than the new one.  Who wrote this movie, George Lucas??

So like I said, literally the only reason for this movie to exist is to explain how the neomorphs introduced in Prometheus became Ripley's xenomorphs.  Apparently the answer to that is, Fassie fucked it all up.