Alright everyone, welcome to the 1st Annual Enuffa.com Wrestling March Madness.  Yeah, yeah, I know it's not March yet, but since most of March will be occupied with WrestleMania-related columns I thought I'd kick this off early.  It's winter, it's snowing like fucking crazy in New England, and we all need a distraction.  So let's get to it.

I took 64 wrestlers (ahem, sports-entertainers) from various eras and seeded them appropriately (That sounds filthy), and then created brackets based on that.  See the full roster below: 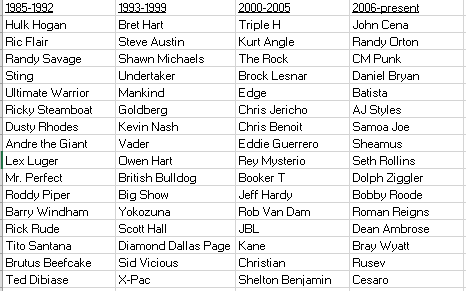 There are four regional brackets: the McMahon Region, the Bischoff Region, the Crockett Region, and the Heyman Region.

Here's a graphic of the McMahon Region bracket: 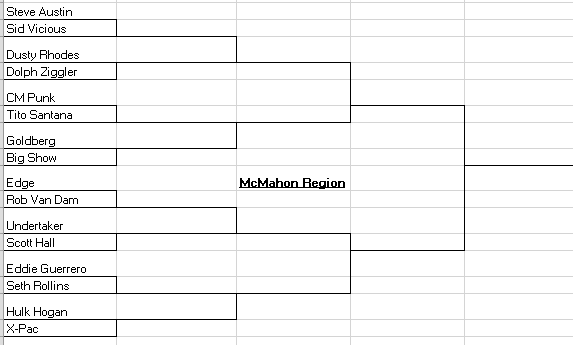 And here's where you come in - vote below in the comments section, or on Facebook if you prefer (Like us at www.facebook.com/enuffa).  I'll tally up the votes and announce the winners in the next column - keep your eyes peeled for the next round here at Enuffa.com!

Get votin' and look for the results on Monday 2/16!
Posted by Justin Enuffa Ballard at 7:49 AM