Welcome to another installment of Dumb Action Movie Reviews, here at Enuffa.com, wherein I, Daniel Moore, traverse the cinematic wonderland that is Netflix, You tube and various other websites looking for action movies removed from the mainstream that probably stink. The ratings are based on 1-4 Indiana Jones whips, as he's the premier action movie character ever and the whip is AWESOME. 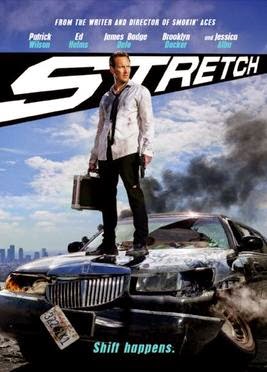 Stretch is a 2014 action comedy written & directed by Joe Carnahan, the same dude that did Narc & The A-Team.  The film stars Patrick Wilson, Chris Pine, Ed Helms, Jessica Alba, with Ray Liotta & David Hasselhoff as themselves.


Wilson stars as a limo driver, cleverly nicknamed Stretch. He's got a gambling, booze & coke problem until he's in a huge car accident & meets the woman of his (and most men's) dreams, Brooklyn Decker. He goes on the straight and narrow but still owes his old bookie a substantial amount of cash that the bookie, of course, needs RIGHT AWAY. His girlfriend subsequently dumps him, he's set to pick up an eccentric billionaire (Chris Pine) by his lovely dispatcher (Jessica Alba) which sets him off on a series of wild and wacky adventures!

I must confess, I love Patrick Wilson. I don't know what it is about him. He's not an actor that will blow you away (yet, anyways) but he has this Everyman quality I enjoy. He nailed the part of Dan Dreiberg/Nite Owl II in Watchmen.  He's perfectly cast in this film as the downtrodden limo driver. As he goes from each effed up situation you can see him getting more depressed and beat up. Though I must say I don't think he gets beat up enough. The movie shows him essentially going thru the ringer of a war zone, but I think he needed a little more napalm in the morning.

Chris Pine steals the show in an unrecognizable role. You've seen him as the clean cut bad boy in Star Trek, Jack Ryan etc. In this he's a goddamn madman, basically destroying Stretch's life for his own amusement as he promises to pay off his debt. He really sinks his teeth into this role as a hedonistic playboy who doesn't give a shit about anything but his pleasure.  I liked him a lot in this flick.


Terribly useless in this film is Ed Helms. He plays a former limo driver that pops up in Stretch's mind as a sort of guardian angel in this flick. But the role is pointless. I don't really know what he's doing here. The character is also very annoying & he seems like he's from a totally different movie. Ray Liotta & The Hoff are entertaining in glorified cameo roles as themselves. Liotta uses his usual intense drama acting skills to good comedic effect in his 5 minutes on screen.

I found this movie funny and entertaining. The action was ok. The actors and performances more than made up for the listless action scenes. Definitely recommend this movie as a hidden gem. It's a fun way to kill 90 minutes, there's boobies in it, and Alba is HOT. It gets three whips up.

Posted by Justin Enuffa Ballard at 11:44 AM