Welcome once again to Enuffa.com's official WWE PPV Predictions, where my associate Dan Moore and I break down the impending WWE PPV offering.

This year WWE opted to discontinue the beloved Elimination Chamber PPV, mostly for logistical reasons; arenas have lately been installing new scoreboard rigs over the center of the floor which makes it damn near impossible to mount the equipment necessary to suspend the 16-ton Chamber structure over the ring.  Sadly it seems the Chamber is a thing of the past.  Damn shame if you ask me.

So in its place is yet another generic PPV format with an even more generic name.  FastLane!  What the shit is that? 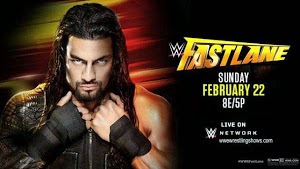 As with last year, the 2015 WrestleMania season has been a jumbled mess thus far.  WWE once again opted not to listen to its audience when booking the Royal Rumble, resulting in the Rumble winner being met with a vicious fan backlash, thus forcing adjustments adding Daniel Bryan to the WWE Title picture.  So now much of the intended 'Mania card is up in the air.  Unpredictability in wrestling isn't necessarily a bad thing but WWE frantically reshuffling things makes for a clumsily-executed Road to WrestleMania.  Next time the company should probably just listen to the fans and have the right guy win the Rumble, hmmmm? 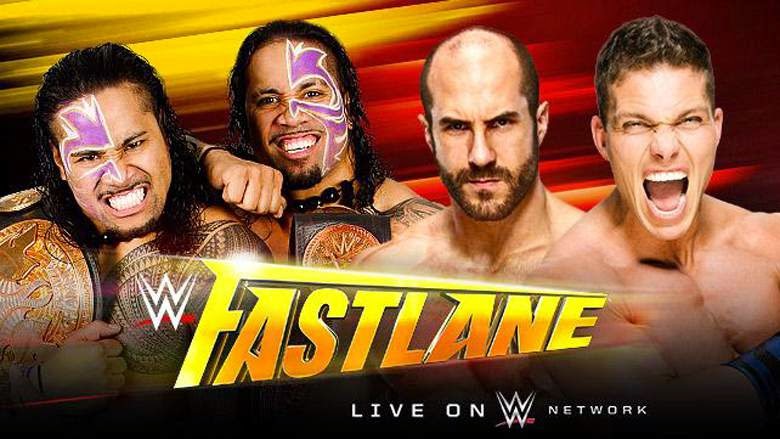 On paper I love this matchup.  If given ample time these four guys should be able to tear it up.  I hate that Cesaro's singles push got flushed down the toilet about six months ago, but hopefully he and Kidd can make the most of this tag team run and become a Hart Foundation-esque Championship duo.

Justin's pick: With the Dust Brothers already split up and Team Mizdow on the way, the only other heel team besides Cesaro/Kidd is the awful Ascension, who appear poised to feud with a reunited Prime Time Players (thank Christ they put those two back together).  I'll go with Cesaro/Kidd to take the straps here.
Dan's pick: Usos retain. I like Cesaro/Kidd but don't think they'll win here 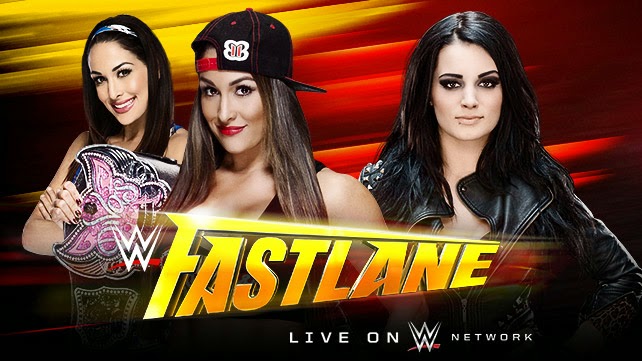 Another women's match that looks good on paper but will almost certain be shortchanged.  Note to Vince: watch NXT if you wanna see how to do women's wrestling properly.

Justin's pick: There's no direction for any of the Divas division, so I gotta stick with the champ again.  Nikki retains.
Dan's pick: Pale Horse takes it down 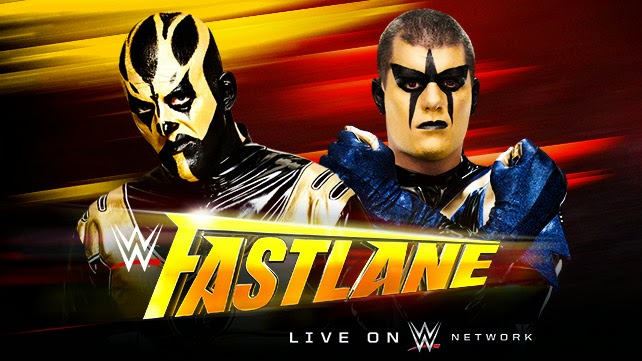 Since Goldie is retiring soon and he and Cody have been hoping to wrestle each other at 'Mania for the past two years, I guess this is their consolation prize.  Seems kinda out of the blue, but should be a decent little match.  I really hope Cody drops the 'Dust gimmick once this is over. 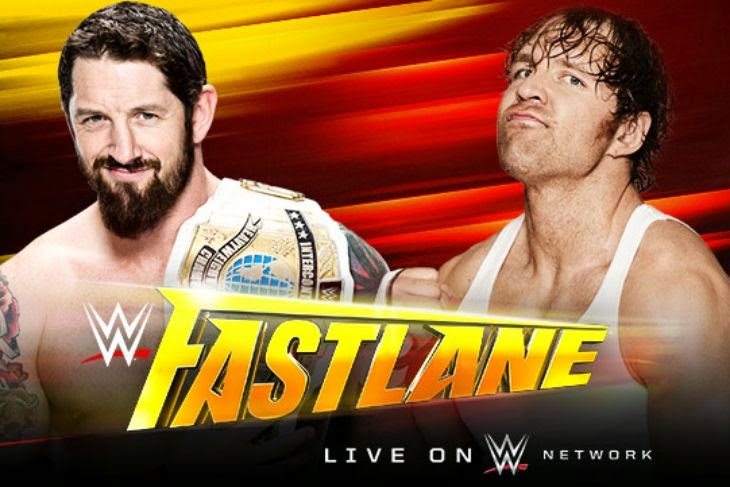 I give up.  I don't understand why the I-C Title has become the Albatross of WWE.  Whoever holds this belt invariably experiences a career tailspin, losing nearly every free TV match before dropping the Title to the next guy in line.  I'm scared to death for Ambrose, who went from being the hottest babyface in the company over the summer, to contending for a toxic, worthless Championship.  If they give him the belt they better treat him like an actual Champion so the I-C Title can be restored to a position of prominence.  But they won't.  Cuz they're stupid.  Note to Vince: watch New Japan if you wanna see how the Intercontinental Championship should be treated.  Hell, go back and watch your own friggin' Network!

Justin's pick: I think Barrett retains here, setting up a rematch and an Ambrose win at 'Mania.
Dan's pick: Ditto. Gotta have a good IC match for Mania 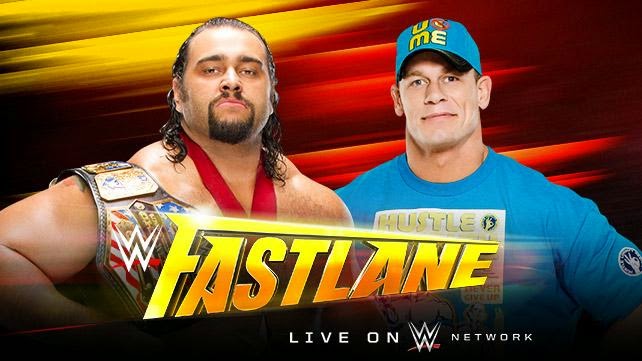 How odd that John Cena is contending for the US Title again after over a decade.  How odd that the US Champion has actually been portrayed as an important member of the roster.  I don't have super high hopes for this match, but the feud has been decent.

Justin's pick: I assume there'll be a rematch at 'Mania, so Rusev kinda needs to win here (especially since there's no way Cena walks out with the US Title), and then Cena probably wins in March.
Dan's pick: I don't really see the point in this feud unless Cena loses this match & Mania rematch. Go Rusev! 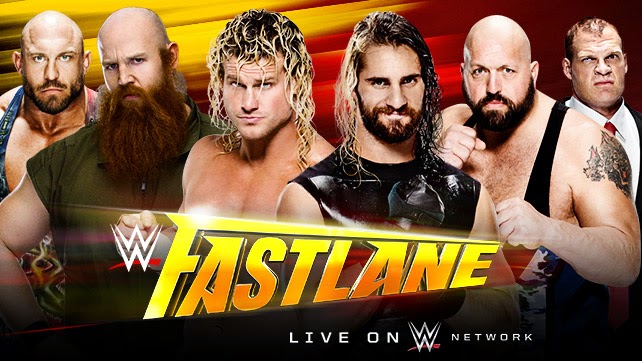 I assume based on how Smackdown ends that this will be added.  Should be a solid six-man.  Rollins is just on the cusp of being the #1 heel in the company, while Ziggler keeps proving why he deserves much more than he's getting. 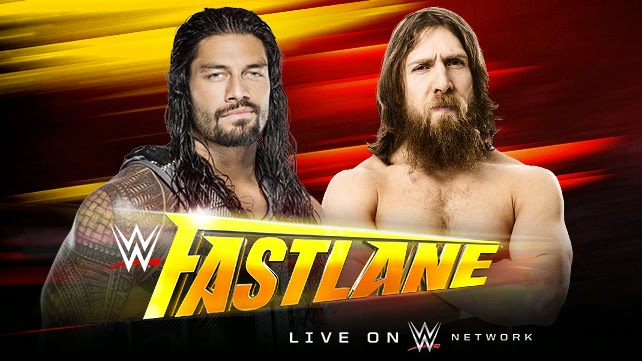 Moment of truth right here.  The Roman Reigns Experiment has been largely a failure thus far.  Reigns got crucified by the Royal Rumble crowd, and while the live TV crowds since have been kinder, they still show significantly more love for D-Bryan.  Had Bryan not been injured just as his WWE Title run was getting started, maybe the WWE fans would've gotten him out of their system somewhat and could've accepted a new top babyface.  But coupled with Bryan's continued lack of a long-term Title run and Reigns' clear unreadiness to be the top dog, the fans are still rejecting what they're being forcefed.  I honestly can't conceive of a WrestleMania that ends with a babyface Roman Reigns standing tall over a conquered Brock Lesnar.  This scenario would result in a backlash similar to what happened at the Rumble (BTW, why was anyone surprised about that Philly crowd response??).  WWE has been clearly testing the waters this week by having both Reigns and Bryan act antagonistic toward each other, thus gauging how the fans would accept either of them turning heel.  But there's noooooooo way turning Bryan bad makes sense - it would be as disastrous as when they turned Steve Austin heel in 2001.

Justin's pick: I think WWE still isn't sure what they're gonna do next month and therefore they'll buy more time with a screwy finish that necessitates both Bryan AND Reigns getting a Title shot at WrestleMania.  Whether that means yet another Triple Threat, or a WrestleMania X scenario with Lesnar defending twice, I think this match ends in some kind of shmozz.
Dan's pick: Roman wins and goes onto Mania to fight the beast


Well that'll do it for our predictions this month.  Check back to find out who won the bet!
Posted by Justin Enuffa Ballard at 8:58 AM