Welcome once again to everyone's favorite* Enuffa.com feature, Awesomely Shitty Movies, where I painstakingly examine a piece of cinematic art and try to understand why it doesn't work the way I'd like it to.

*In a poll conducted among three readers, two cited ASM as their preferred column.


Today I'll be picking apart the acclaimed 2013 concert film, Metallica: Through the Never.  I've been a monumental Metallica fan since early 1989 (as you can read here and here), when I first laid eyes on the video for "One."  Never before had my ears been assualted by such molten, powerful musical strains.  Just a few short weeks later Metallica were my favorite band in the world, and aside from The Beatles they still are.  I've seen these fellas in concert ten times and it's been two-plus hours of heavy metal bliss on every occasion. 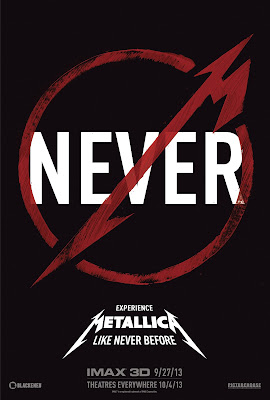 So when I heard Metallica would be releasing a concert film in IMAX no less, I was certainly intrigued.  While my initial thought was, "Shouldn't they finish their new album first?" I knew Through the Never would be a fun, immersive hard rockin' experience, interweaved with some sort of ongoing storyline throughout.

So why does this qualify as an Awesomely Shitty Movie you ask?  Well sir, Through the Never is a film of extremes.  Rarely has a film come along where the awesome is so immeasurably life-altering, yet forced to co-exist, sometimes within the same shot, as such soul-crushingly shitty claptrap.  So let's Jekyll & Hyde this movie and separate what sucked about it from what was great, thus freeing its virtuous aspects to truly achieve their potential.  I dunno what that means....

Look, it's a Metallica concert film.  It is by definition gonna be all kinds of awesome as long as the band is onscreen shredding everyone's balls off.  It's Hetfield, Ulrich, Hammett and Trujillo blasting the audience with boiling-hot volcanic metal, like four flamethrowers melting off your face.  They rattled off such classics as "Creeping Death," "Master of Puppets," "Enter Sandman," and the aforementioned "One."  How can you go wrong?  Also with Trujillo on bass and the band having refocused on good old-fashioned speed metal, their live performances have been tight as a tripwire.  Where their chops in the late 90s got a little messy, the four members have been at the top of their game since Death Magnetic came out.

Directed by Nimrod Antal (of Predators fame), this movie is visually beautiful.  Shot with IMAX cameras, everything looks perfectly crisp and clear, and the cinematography takes you right on stage with the band.  There are some amazing shots over the shoulder of a particular band member where you can see the faces of the audience as they react to the metal awesomeness.  There's also constant motion to give everything a dazzling kinetic energy and explore every inch of the massive stage.  The storyline stuff is heavily stylized, visually borrowing from directors like Christopher Nolan and David Fincher.

Since 1991 Metallica has utilized a "center stage" setup, giving the band loads of room to move around and play to all four sides of the arena.  In this case the set takes up nearly the entire floor of Vancouver's BC Place and is comprised of LCD panels displaying different video clips for each song.  The set also has rotating structures that hang from the ceiling and show different graphics, and as always there's loads of pyro.  Such extravagant sets add theatricality and lend the band a mythic quality, while always giving the audience some kickass imagery to take in.

Dane Dehaan plays Trip, the "main character" of the movie and a member of Metallica's road crew, who is sent on an errand as the film opens, taking him on a weird journey through the streets of Vancouver.  Dehaan has no actual dialogue in the film and has to convey the character's emotional state through facials and body language, and he does an admirable job considering how little he has to work with.  Dehaan was also Harry Osborne in The Amazing Spider-Man 2 and crushed James Franco's previous performance as that character.  So he's a real actor, not just some hack they grabbed off the street.

So all of the above made this film entertaining.  Were the film limited to just those aspects we'd have a near-masterpiece of rock n' roll cinema.  Unfortunately the stuff I'm about to talk about prevented that from happening.

Inexplicably the filmmakers and the band decided to incorporate an actual storyline into this simple concert film, involving the aforementioned Trip being sent to go fetch a black satchel from a waiting truck on the other side of town.  During Metallica's first song Trip's boss pulls him aside, interrupting his (and our) concert experience to dispatch him on an unspecified assignment.  The film then CUTS AWAY from Metallica's performance, both visually and aurally, so we can follow Trip through the parking garage to his van.  I'd like to repeat that - during the first song of this Metallica concert film, the film cuts away from Metallica's concert so we can watch some random kid walk through a garage.  The rest of the movie is then interspersed with scenes showing Trip's progress and the obstacles thrown in his path, such as a car accident, a violent showdown between police and rioters (with no explanation for said riot), and an unnamed horseman wielding a giant sledgehammer.  In the end Trip finds the satchel and brings it back to the arena.  What's in the satchel?  We're never shown, but apparently it was something reeeeeealllly important since Trip almost died about forty-five times on his way to retrieve it.


In addition to this storyline being tedious and nearly impossible to follow, it involves the old "is this a dream or not" angle at several turns, such as when Trip lights himself on fire as an attempt to escape the rioters, and later finds himself on a rooftop face-to-face with the evil horseman.  He then begins smashing the cement beneath his feet with the giant sledge, which causes every building within a half-mile radius to collapse.  Not one scene in this story makes any sense and there's no real resolution.  So it all amounts to a pointless diversion from the main reason for watching this movie - a live Metallica performance.

Having seen Metallica in concert many times, I'm used to a two-and-a-half-hour marathon of a show.  Unfortunately this film only runs 93 minutes, probably about ten of which is devoted to non-musical story-related sequences.  This leaves room for only 14 songs, not all of which are presented in their entirety.  Now I'm not asking for a sprawling 150-minute film, but couldn't they have made this closer to two full hours at least?  Only one song from Death Magnetic is included which, given that's their most recent album (Christ guys, it's been 7 years, can we get a new record out already?), seems pretty skimpy.

-So the movie's called Through the Never, and yet the band doesn't play the song "Through the Never?"  Why the hell not?  Also, while that's a cool title, the story presented doesn't deal with the song's themes of existentialism, life and death, or the larger questions of our place in the universe at all.  If you're gonna create a fictional storyline that doesn't make any sense, at least have it tie back into the title, huh?  I'd be much more willing to forgive the story's lack of clarity and purpose if it dealt with a more nebulous subject.

-Early in the show James' microphone cuts out and he has to switch to a different one, but on his way to the other side of the stage he motions angrily at the techs to fix it.  Was this planned?  If so, why?  If not, why not cut that particular song out or edit in some audio from a different performance to cover it up?


-During "...And Justice for All" they break out the giant Lady Liberty statue from the album cover, which crumbles at the end of the song, creating a very cool visual.  But rather than just raising it from under the stage or lowering it from the ceiling, the stage crew works throughout the song to assemble the thing, only for it to fall apart two minutes later.  The crew's presence onstage is kinda distracting and it just seems like a lot of work during the show for such a quick payoff.

-At the end of the concert the lighting rig falls apart in a shower of sparks, setting crew members on fire and exploding much of the equipment, after which the band plays in basic lighting through small amps.  This gimmick has been present in Metallica's stage show on and off since 1996, and while it's a cool bit, it's kinda played out at this point, not to mention anyone who's seen Metallica in concert in the last twenty years won't be fooled by these theatrics.

-The closing credits sequence includes a rare performance of "Orion" in front of an empty stadium, which was very cool to see, but why not make that part of the proper show?

-One thing that's always bugged me about Metallica's live version of "For Whom the Bell Tolls" is that there's a musical stop after the line "Take a look to the sky just before you die/It's the last time he will!"  But that stop would make much more sense after "Stranger now are his eyes to this mystery/Hears the silence so aloud."  Get it?  Silence?  Wouldn't that fit better?

-The band has taken to playing the "machine gun" section of "One" so fast that they can't articulate the sextuplet notes properly.  So it doesn't even sound like a machine gun anymore.  That's kinda the signature riff of that song, so it's irksome when it's either not played correctly or I can't hear it clearly.

Had Through the Never just been presented as a straight-ahead concert movie I'd call it an unabashed success.  Unfortunately it's weighed down by a silly and purposeless subplot involving a character we've been given no reason to care about.  Did even one single moviegoer buy a ticket for this film to see how the roadie story plays out?  No.  We just wanted to see Metallica play a concert in IMAX.  Just show us the concert and skip the window dressing.  If the character had some kind of arc and the story were satisfying that would be something.  But he doesn't and it isn't.  So why bother including it?

Look Metallica representatives, you know I love ya.  Always will.  But you've made a concert film that's only good when it could've been truly great.


That's it for this week's ASM!  Bring it on back here for more unqualified cinematic evaluation here at Enuffa.com!
Posted by Justin Enuffa Ballard at 12:28 PM