It's a two-fer kinda weekend in WrestleTown, as WWE will present both Survivor Series on Sunday, and NXT Takeover: Toronto on Saturday.  So my colleague Landon and I will try to predict the outcome of NXT's newest opus.  Join us, won't you? 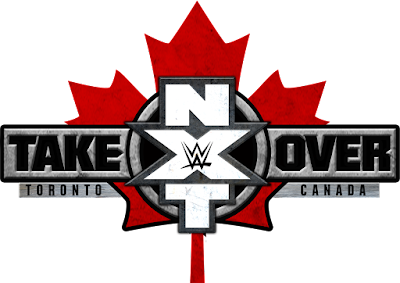 Looks like NXT will now be chasing the main roster around the globe for every Big Four PPV, and I love it.  It makes the Rumble, 'Mania, SummerSlam and Survivor Series feel like a bigger deal when all four become big wrestling weekends, it forces the main roster to up their game, lest they be upstaged by "developmental," and it adds to the magnitude of the TakeOver specials.

The Toronto edition looks pretty great on paper, and once again the red and blue brands will have their work cut out for them if they wanna follow it.  For once though we may have an actual contest on our hands, as Survivor Series also promises to be something special. 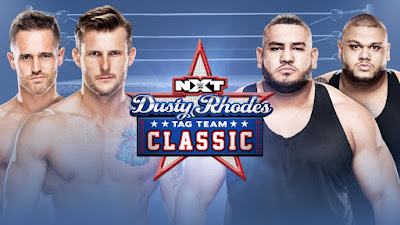 This tourney had the potential to be bigger than last years, what with 16 teams vying for the trophy, and had the original plan of Austin Aries & Roderick Strong making the finals come to fruition we'd have a guaranteed top-notch affair.  Alas, Aries sustained an eye injury thanks to a stiff Nakamura kick, and his team was out of the bracket.  So we're stuck with two teams about whom I'm less than enthusiastic.  Hopefully they'll both prove their worth here with a killer contest, but I'm not expecting anything amazing.

Justin's pick: I gotta go with Paul Ellering's duo, particularly since Ellering himself will be stuck in a cage.  Usually the wrestler(s) whose manager is incarcerated at ringside ends up winning.
Landon's pick: Let's talk for a hot second about this thing. Last year it was used to launch a multi month, multi main event program between the two winners. Now it's between the not-Road Warriors and a falling flat Hype team. This could've been done a lot better, but I understand at least some plans had to be changed.  For what it's worth, Authors to win. 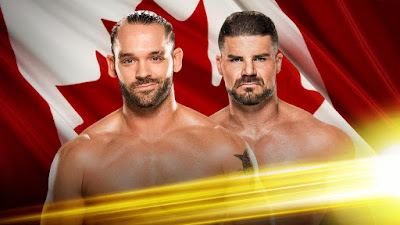 Another showcase match for Roode, who hasn't shown me that much in the ring as yet, but who does carry himself like a superstar.  At this point Roode's appeal is all about that entrance.  Hopefully he changes that here.

Justin's pick: Roode, clearly
Landon's pick: The crowd may be split Solidly in half for this one. By that, I mean the crowd will equally be chanting both men in full force. Roode to win, honestly due to Dillenger at this point being unable to break out in NXT. 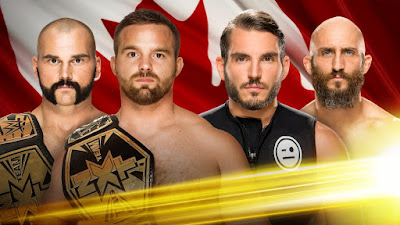 These four guys stole the show last time by most accounts (I slightly preferred Asuka vs. Bayley but that's just me), and have an excellent chance of repeating that feat here.  I love 2/3 Falls matches and I hope this gets a good 25 minutes to feel really epic.  Tag team wrestling is alive and well in NXT, in no small part due to the amazing work of The Revival.

Justin's pick: I gotta think DIY finally gets the job done this time
Landon's pick: The Two out of Three falls match seems to be becoming a staple blowoff in NXT and I love it. The psychology that goes into the match is unlike anything that's been done in WWE, or at least on a really good level, in a long time. I truly fear what will happen to The Revival once they're called up to the main rosters, but DIY wins gold here. 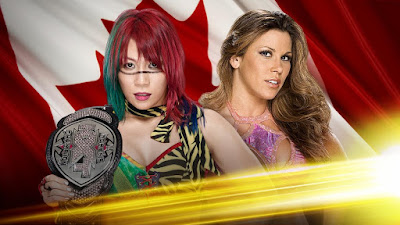 This should be great.  Apparently they originally wanted Trish Stratus to make a return in her hometown, but she is expecting another child, so Mickie was brought in instead.  I think this matchup will end up better than Asuka-Trish would have, since Mickie hasn't been off as long and from a technical standpoint was always a step above Trish (No disrespect meant to Ms. Stratus - Trish I fuckin' love you!).  But I expect a fantastic battle of crazy.  I'm not sure if Mickie is back long-term or if she's a stop-gap until they replenish the NXT Women's division, but she's a welcome addition regardless. 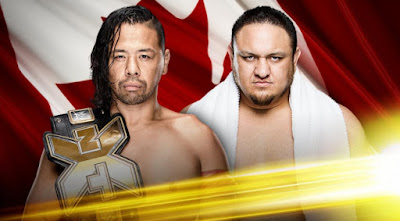 While their first matchup wasn't the five-star classic I expected, it was still a fine main event that left room for improvement.  Hopefully we'll see said improvement in this return match.  On paper this bout should steal both the show and the weekend, but we'll see.  There's little suspense about the winner since Joe's getting called up any day now (Personally I'd love to see Joe take Shane-O Mac's place in the Men's elimination match on Sunday).  But this'll be an awesome main event regardless.

That's your TakeOver card.  Should be yet another great night of wrestling from WWE's best brand.  Enjoy, and comment below with your thoughts!
Posted by Justin Enuffa Ballard at 4:10 PM