The History of NXT TakeOver: Toronto


After two NXT Takeovers that just reached "very good" status, the yellow brand really brought it for Toronto.  This show had everything you could want from a Takeover special, including three good-to-great Title matches.  So let's get to it...

Tye Dillinger vs. Bobby Roode kicked things off as expected.  Roode's entrance included a choir singing the intro to his (incredible) entrance theme.  Seriously, I can't get that stupid song out of my head for days after I watch one of these shows.  Why's it hafta be so good?  Anyway, this match was given considerably more time than I expected and played out like an old-school undercard bout.  As I watch Roode I'm reminded of Ted Dibiase, where his character and the way he carries himself mostly make up for the fact that he doesn't really do that much between the ropes.  I know he's a heel so he isn't supposed to fly around and such, but his offense strikes me as very limited.  Anyway, this match was fine.  Roode got the win using his new implant DDT finisher, a vast improvement from his pumphandle slam.  Solid opener.

Next up was the finals of the Dusty Classic, and as I figured it was a middling affair.  TM-61 bounced around and did a couple of fun high spots, including jumping off the structure holding Paul Ellering's cage, while the Authors of Pain mowed them over.  Still not sold on this team, but they're better Road Warrior clones than The Ascension.  They need new ring attire though.  How many times are we gonna see monster heels in SWAT gear?  I mean Roman Reigns is STILL wearing that shit.  This match was forgettable, though the inevitable DIY vs. AOP match should be a fun mismatch.

The show picked up huge with the NXT Tag Team Championship, as The Revival faced DIY in a 2/3 Falls match.  I'm a huge fan of this match type, I'm a huge fan of great tag team wrestling, and this bout lived up to all its promise.  Dash & Dawson played the part of The Andersons to the hilt while DIY's work brought to mind the Rock & Roll Express.  Johnny Gargano nailed the Ricky Morton role, spending much of the match as the babyface in peril.  The psychology here was perfect, and the third fall had so many close near-falls which the crowd totally bought into.  After having both his legs chopped out, Gargano managed to hook the Gargano Escape on Dawson while Tommaso Ciampa snared Dash in an armbar for the double tapout.  Great, great tag team match. 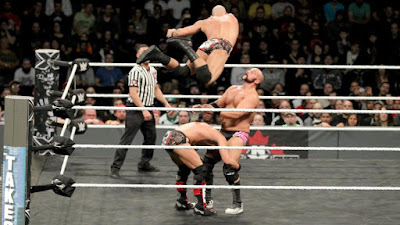 The NXT Women's Title was on the line next as Asuka defended against the returning Mickie James.  James looked fantastic here, having lost nary a step, while Asuka continued her very gradual heel turn.  Both women played mind games and neither backed down.  Asuka played up her growing overconfidence to the point that when James took control late in the match Asuka showed signs of real desperation, a first for this character.  I'm loving this transition for Asuka and can't wait to see what she does as a sadistic heel (Hopefully she brings back the scary-as-fuck facepaint).  Asuka narrowly escaped losing after a Mick Kick before slapping on the Asuka Lock for the submission win.  Mickie then extended a handshake, which Asuka rebuffed.  Damn fine match here. 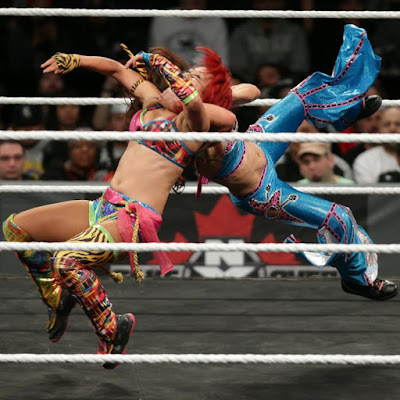 The main event had a lot to live up to, as the first Joe-Nakamura go-round left some a little cold (not that it was bad, it just wasn't great).  Fortunately this match improved on the first immensely, with a brisk pace, palpable animosity between the two, and much more back-and-forth.  Joe worked over Nak's legs for much of the bout, hoping to take away his best weapons.  Nak did undersell the legwork after a few minutes, but it's a minor gripe considering how good the match turned out.  Nak eventually hit the Kinshasa but was too slow to follow up with a cover and Joe kicked out.  The action spilled to the outside where Joe hit an STO onto the ring steps, then rolled Nak back in and hit the Muscle Buster for a shocking NXT Title win.  Joe is now the first two-time NXT Champ, and this feud will continue.  I'm hoping one or both of them get called up to Smackdown fairly soon, but this match was fantastic and captured my imagination much more strongly than the first outing. 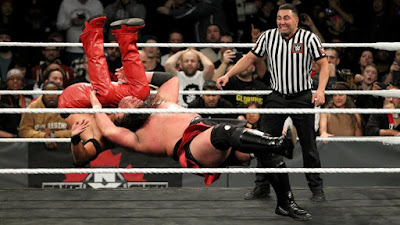 NXT Toronto started a little slow for me but the three Title matches all lived up to the hype and two of them reached **** territory for me.  Another pretty great effort from the NXT brand that just slightly edged out Survivor Series as the better show of the weekend (It was real close though).

Best Match: The Revival vs. DIY (just by inches; the main event was also excellent)
Worst Match: The Dusty Classic
What I'd Change: Not much really.  I didn't have any major complaints.
Most Disappointing Match: Nothing
Most Pleasant Surprise: I wasn't really surprised by anything either - all the matches were roughly as good as I expected them to be.
Overall Rating: 9/10

San Antonio
Posted by Justin Enuffa Ballard at 11:30 AM