The History of NXT TakeOver: Arrival

What's up kids?  I'm back with another Enuffa.com PPV History series!  Taking a break from WWE's main roster PPVs, I shall now tackle the vaunted NXT TakeOver specials.

The NXT brand has blossomed incredibly since Triple H assumed control of it back in 2012.  Once viewed as little more than a feeder system for the main roster, NXT under Hunter's direction has actively recruited the best Indy talent from all over the world, lending the brand some much-needed credibility and helping season the homegrown rookies.  NXT is now one of the most beloved brands in all of pro wrestling, based at Full Sail University but having sold out full-scale arenas like Brooklyn's Barclays Center.  It's become commonplace for NXT specials to outclass the main roster PPVs, as Hunter's brand features a much greater emphasis on the in-ring product, simple, easy-to-follow storylines, and perhaps most notably, a Women's division that's been consistently as good or better than anything else in the entire company.  While the main roster has quite often failed to properly utilize NXT call-ups, there's no denying the "third brand" has begun to leave its mark on WWE as a whole, many of its graduates having won multiple main roster championships.  Let's take a look at the brief but already storied history of NXT: Takeover!

The show opened with an incredible 22-minute war between Cesaro and Sami Zayn, which brought to mind both men's ROH work.  The counters here were off the charts as both guys pulled out every move they could think of.  The match told a great story of Cesaro being the overconfident bully and Zayn being the determined underdog who refuses to stay down.  What a way to kick off the first NXT special.  If you weren't hooked after watching this match there just might be something wrong with you. 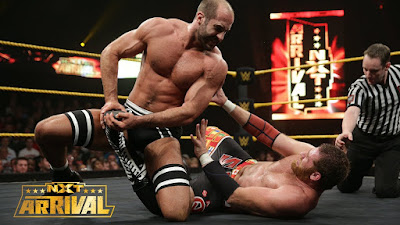 Next up was Mojo Rawley vs. CJ Parker (better known today as Juice Robinson).  This was little more than a squash to show off Rawley's stuff.  He wasn't terribly accomplished in the ring at this point, and he's got one of the worst finishers in the game (think Earthquake's finisher but 150 pounds lighter), but few guys in NXT boast as lively a persona.  Parker's character was that of an obnoxious environmentalist and it's a little disturbing that such a persona would only get over as a heel.  But whatever, this was a throwaway.

The first Title match took place next as The Ascension faced Too Cool in a match between two teams I'm not fond of whatsoever.  The Ascension have to be the least successful Road Warrior knockoffs of all time.  Konnor at least looks the part, but at 5'11" and 220 pounds Viktor is hardly the right guy for a team like this.  Too Cool's schtick got old back in 2000 and they weren't given much to do here.  I'm not entirely sure why they were picked for this Title defense, actually.  Not much of a match.

Things picked up in the Women's match, as Paige defended the Title against Emma.  While not on the level of the Four Horsewomen era, this match was a good indication of where the NXT Women's division was headed, and pretty much annihilated anything the main roster Divas division was doing.  Both ladies worked a gritty, dramatic match that started off a bit plodding but escalated nicely toward the end.  Paige debuted her Scorpion Crosslock finisher (one of my absolute favorite moves) for the submission win. 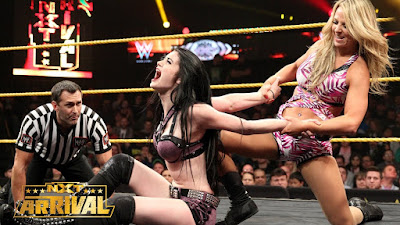 Xavier Woods vs. Tyler Breeze was thrown out less than a minute in, when Rusev attacked both guys.  Umm, ok.  Why not give Rusev an actual match on this show instead of having him lay waste to two promising talents?

The main event pitted NXT Champion Bo Dallas (a fairly effective chickenshit heel prior to his main roster burial) against Adrian Neville (a very effective aerial master prior to his main roster burial) in a Ladder Match.  Pretty good stuff here, though several innovatively brutal spots were teased but not delivered.  Ultimately it was a very safe, WWE-style Ladder Match but it put Neville over as the new face of NXT, and this was the first time the NXT Title felt like a standalone championship, rather than a feeder for the main roster.

Overall this was a solid debut special for NXT; the brand began to emerge as its own attraction as opposed to just a developmental system.  They included a few bells and whistles (like Shawn Michaels ceremoniously hanging the belt from the ceiling) to try and hook the main roster audience, but in the end it really was about establishing NXT as a viable third WWE brand.  Like the debut album of a great band, this show felt like NXT hadn't quite found its voice yet, but it was a good start.

Best Match: Cesaro vs. Sami Zayn
Worst Match: I'd say Woods vs. Breeze but that wasn't even long enough to be considered a match.  So we'll go with Ascension vs. Too Cool
What I'd Change: The Ascension were really not up to the task of being the company's dominant team.  But if you must feature them, give them stronger opponents than Too Cool, for God's sake.  Also Woods vs. Breeze should've been an actual match.
Most Disappointing Match: Woods vs. Breeze
Most Pleasant Surprise: That Cesaro vs. Zayn got more time than anything else
Overall Rating: 6.5/10 - The opener was the only great match and there were two other good ones, but the rest was filler


Posted by Justin Enuffa Ballard at 9:43 AM