The History of NXT TakeOver: TakeOver

Time for a restaurant-quality show....


While technically the second NXT Network special, this was the first to carry the name TakeOver, and it was a major improvement over Arrival.  The streamlined card featured five matches, three of which were in the four-star range, and one of which truly kicked off the so-called "Divas Revolution."

The first two matches were nothing spectacular; Adam Rose vs. Camacho opened the show.  I figured this would be a squash win for Rose but Camacho actually dominated the match.  One (of many) problems I have with the Rose persona is he never seems to be trying to win the match, he's all about the comedy aspect.  So when he makes a late match comeback and ends up winning suddenly it feels false.  Short and inoffensive.

Next up was NXT Tag Champs The Ascension vs. Kalisto & El Locale.  While another example of The Ascension's limited in-ring ability, this was easily a step above their Arrival match, as Kalisto was able to carry most of the action.  Locale however was pretty awful.  It seemed like he used to be able to do the high-flying lucha moves but was now far overweight to pull them off.

The final three bouts were quite a trilogy of awesome.  Sami Zayn faced Tyler Breeze for the #1 Contender's spot, and what a match!  These two meshed perfectly and everything looked incredibly crisp.  Both guys left it all in the ring with crazy aerial moves and tons of counters.  Breeze blocked Zayn's Helluva Kick and inadvertently hit him in the groin, then capitalized with his finisher for the upset win. 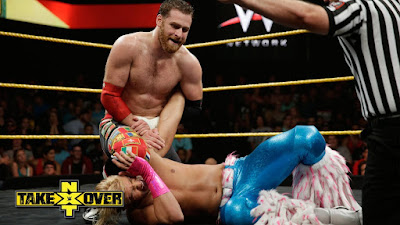 The Women's Title tournament final took the semi-main event slot, as Natalya faced Ric Flair's daughter Charlotte.  This for me was the true genesis of the NXT Women's division.  While the Paige era helped condition the fans against WWE's version of women's wrestling, where two inept model-types stumble through a match, Nattie vs. Charlotte was the first truly great NXT women's match.  This was a classic game of human chess, full of grappling and counterholds a la Flair vs. Steamboat.  After years of being misused on the main roster, Nattie got to show what an incredible talent she is by leading the extraordinary-but-inexperienced Charlotte through a bona fide classic.  Aside from a few telegraphed moves here and there, this match was one of the best things WWE did in 2014. 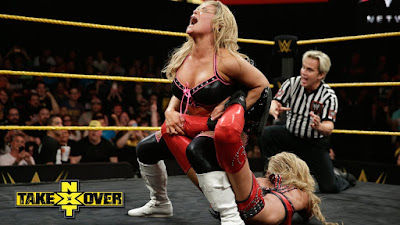 The main event had quite a task following the Nattie-Charlotte match, but Adrian Neville and Tyson Kidd certainly gave it their all.  Like his wife in the previous match, Kidd finally got to show what he was capable of after consistently being relegated to punching bag status on RAW and Smackdown.  Neville had also fully come into his own as an NXT main eventer, and these two delivered a fantastic Title bout.  The opening minutes were all about the mat wrestling, but as the match wore on the risks got higher and higher.  Neville finally scored a top-rope hurricanrana and followed it with the Red Arrow to retain. 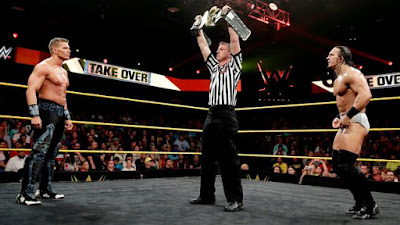 Where Arrival was a pretty uneven show that made it seem like NXT hadn't quite found themselves, TakeOver was a confident, stacked Network special that really set the tone for the "developmental brand" outclassing the main roster.  After two lackluster matches the show kicked into high gear with a trio of brilliant showings, particularly the dazzling Women's bout.  Women's wrestling in WWE was reborn with a vengeance thanks to two second generation stars (I guess Nattie's actually third-gen), and stealing the show would become a regular occurrence for this division.

Best Match: Natalya vs. Charlotte
Worst Match: Adam Rose vs. Camacho
What I'd Change: Not much, though Adam Rose's act got old about a week after his debut
Most Disappointing Match: Nothing really
Most Pleasant Surprise: I knew the women's match would be good but I had no idea what a masterpiece it would be.  This was at the time probably the best women's match I'd ever seen.
Overall Rating: 8.5/10

Posted by Justin Enuffa Ballard at 8:56 AM