This Saturday is All Elite Wrestling's second official event, which will be available on B/R Live as a free stream.  It's definitely more of a minor show but there's still plenty of intriguing stuff going on to tide us over until next month's Fight for the Fallen, which will tide us over until their August supercard All Out. 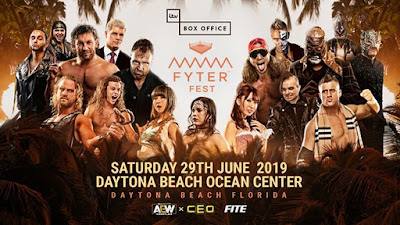 AEW right now is everything WWE is not.  Cool, exciting, buzz-generating, and man can this company move tickets.  All Out, as everyone is now aware, sold out 12,000 tickets in 15 minutes, with about 100,000 more users waiting in online queues to buy them.  No wrestling event in history has ever had this much demand for tickets.  Not WrestleMania, not Royal Rumble, nothing.  Simply amazing. 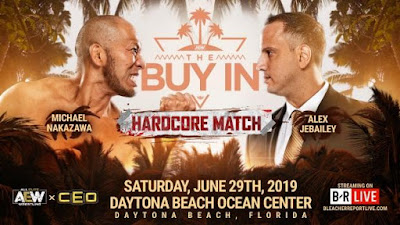 I don't know much about either of these dudes, but Jebailey is the head of CEO Gaming, which is co-sponsoring this event.  For that reason I could see him winning this match, but Nakazawa is an actual AEW guy so it would make more sense for him to go over I think.

Kylie seems to be one of the women they're building this division around, and since she came up short at Double or Nothing it makes sense for her to get a win here. 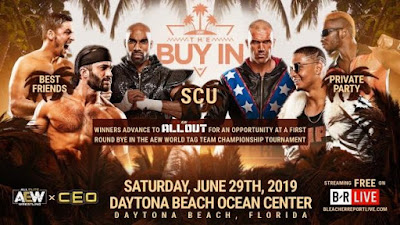 This will be a wild affair full of non-stop action.  Best Friends and SCU both scored wins at DON, while Private Party is getting a proper introduction here.  The winners in this match advance to a First-Round Bye match at All Out, to determine their placement in the upcoming Tag Title tournament.  I guess Best Friends makes the most sense. 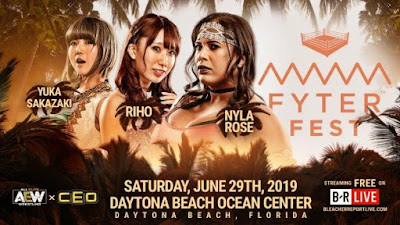 All three of these women debuted at DON, with only Riho on the winning side of her match.  Nyla definitely stands out as a potential star, though she's a bit green, while Riho and Sakazaki both have plenty of experience to carry a lot of the action.  Nyla being the only one officially signed to AEW, I'll pick her to win and establish herself as a future title contender. 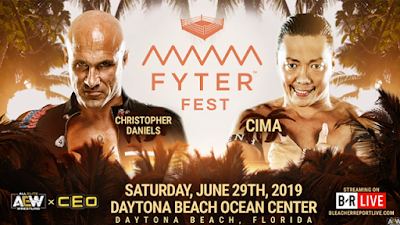 This should be a pretty great little match between two accomplished veterans.  Daniels has a new lease on life after flirting with retirement, while Cima brings a ton of Japanese wrestling cred.  Being that Cima is slated to fight Kenny Omega next month I have to think he wins here to get him noticed.

Adam Page vs. Jimmy Havoc vs. Jungle Boy vs. MJF 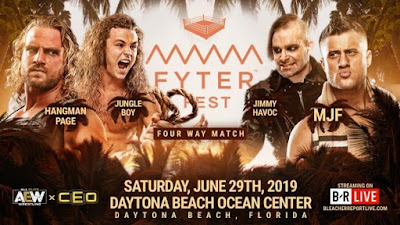 Coming off the angle of sorts that interrupted Bret Hart's unveiling of the AEW Title, these four contenders will do battle to help build the championship hierarchy.  Page is facing Chris Jericho at All Out to determine the inaugural champion, so he obviously has to win this.  But Havoc, Jungle Boy and MJF will be able to announce themselves as budding stars in this match. 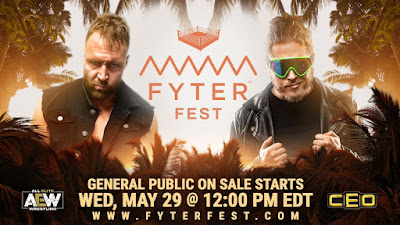 Moxley is obviously set to be a company cornerstone and will make a huge statement here in his AEW debut match.  Janela is a bump machine who will make Moxley look like a murdering bastard.  I don't expect this to go very long. 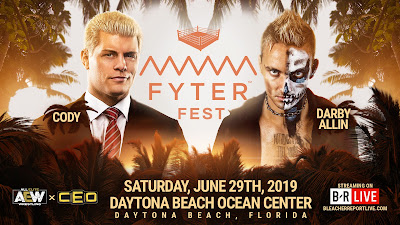 Cody will be "All In" when he faces Allin.  **crickets**  This match will be to further cement Cody as a top star while introducing everyone to Darby.  It will be competitive but ultimately Cody should win. 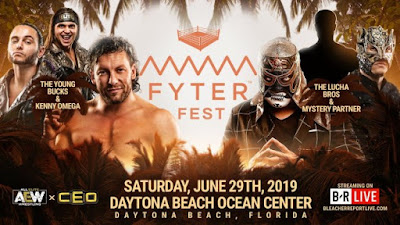 I assume this is the show's main event, and given the talent involved it should be insanely awesome.  The Bucks vs. Lucha Bros was my favorite DON match and Omega vs. Pentagon was my favorite All In match.  So this will be a helluva ride.  Kenny's coming off a loss at DON so the smart move is to have him win here, although they could have Matt or Nick get pinned since the Bucks defeated Lucha Bros last month.  In the interest of making Kenny a top AEW star though, I think he and the Bucks should win.


Fyter Fest will be a nice way to whet our AEW appetites, with some potentially excellent stuff to build toward All Out.  I can't wait to see both All Out and the weekly AEW show; this is all incredibly exciting.


Posted by Justin Enuffa Ballard at 8:28 AM