This column features some of the greatest and grossest dive bars in the U.S. of A. I’ll be using a rating system between 1 and 4 handlebar mustaches, which is the preferred mustache by 9 out of 10 old timers in dive bars. 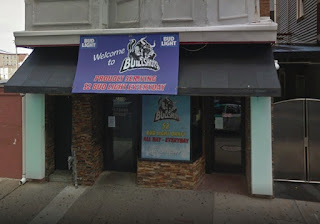 You had me at $2 Bud Lights, BullShots.

My dear friend, Scotty Pickles, is getting married this year and we needed a place to go for his bachelor party so’s we could gamble, son. We decided Vegas was too far and Foxwoods too close. We settled on Atlantic City. As we drove to check into our place, we zoomed past that delightful sign above. We knew we found our spot. Bud Light is Southie water so this was a friendly place for us. BullShots has a long bar with a room in the back that has pool tables and oh yea, it’s connected to a strip club.

Fun Factor: Oh, there’s a ton in this joint. There’s all kinds of silly shit hanging from the walls here. There’s pool tables in the back (though I never made it back there because BEER). They got beer pong, hookah and tons of promotions all week. It’s a veritable drunken playground. Oh, and it’s connected to a strip club.

Beer Choices: They had $2 Bud Light. That’s really all I needed. But yes, they had a surprisingly diverse beer menu for a hole in the wall bar. Yeungling, Stella and many of your other big name beers. The funniest part about the booze in this joint is that you hafta buy your beers in this bar and then bring it over to the strip club. AC has some weird law where the strip clubs can’t serve booze if they show completely NEKKED womens, so to get around it, some of the strippy strips require you to bring your own beer. It’s truly a wonderful scene watching grown men pay $15 bucks for a 6 pack and get walked over to the strip club by a stripper to watch them strip. The circle of life, indeed.

Cast of Regulars: A surprising number of repeat customers come into a dive bar connected to a house of ill repute. The bartenders essentially knew everyone that walked in the doors, and by the end of our weekend, they knew the Boston boys as well. One bartender, Ashleigh, started to tell us about how she grew up with no electricity or TV or any fun stuff. She was Mormon, or Amish or Scottish or some shit, I dunno. She did that thing where they can leave their community to live like us norms and then go see if they wanna head back to live like poor people. What’s it called, RumChata? (Editor’s note: it’s called Rumspringa, genius) Anyways we were ENTHRALLED by this story and talked to her for like nine hours straight instead of going to see tits. So, yea, the cast of characters there was pretty good. 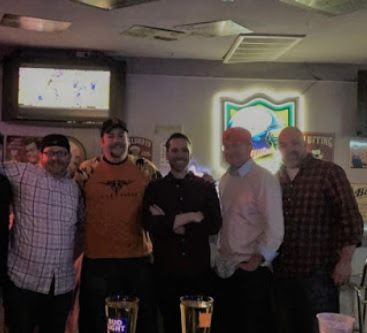 We count as regulars there now.

Stench: Eh, nothing to write home about. It had the bleach stink of being disinfected every night with the faint aroma of stripper perfume wafting in and out of the place. It really brought me back to the old days when Dad would drop Mom off for her nightly shift. Ah, summer nights. Not entirely unpleasant.

Overall: This became our defacto base of operations. Which in itself was amazing, cause it’s in a less than safe neighborhood and eight dumb, drunk white guys walking out of this place at 4 am is probably a bad move. But we all made it back to our respective beds for some beautiful hangovers. Between trips to the casino, the boardwalk and then heading to this bar, I’d say we nailed our trip to Atlantic City perfectly. This bar helped us get loaded all weekend, and we are forever in their debt.