The History of NXT TakeOver: XXV

Man, for a show that sorta flew under the radar in the wake of AEW's monumental debut, NXT TakeOver XXV really tore the house down, lit the ruins on fire, and peed it out.......that was a compliment by the way.  WWE's one good brand delivered yet another incredible show this past weekend, a fast-moving 160 minutes that boasted three ****+ matches and a couple of very strong supporting bouts.  This brand is on fire. 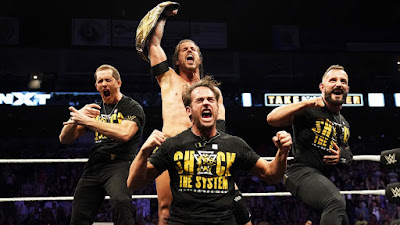 The show opened with a stellar 15-minute fight between Matt Riddle and Roderick Strong.  I said two months ago that Riddle's bout with Velveteen Dream finally sold me on the former MMA star, and this match solidified that in spades.  These guys went balls-out for 15 minutes and yet still found room to build to a peak, with super crisp, smooth-as-fuck action and tons of nearfalls.  This is how you kick off a PPV.  Spots that stuck out to me were Strong nailing Riddle with repeated running forearms, each of which got a bigger pop than the last, followed by his double-underhook backbreaker for a long two-count that got a huge gasp from the audience.  Riddle failed to put him away with Bromission but instead debuted what was basically a reverse Neutralizer called Bro Derek (cute name) for the win.  This was a fantastic showcase match for Riddle but also displayed what an incredible worker Roddy Strong is.  The intensity and crispness reminded me of a NEVER Openweight fight and I could watch these two smash each other all day long.  Matt Riddle is the real deal.  ****1/2 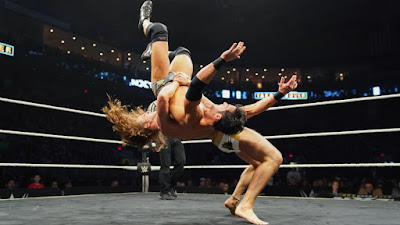 Next up was the 4-Way Ladder Match to determine the new NXT Tag Champions.  I might be in the minority but I'm burned out on ladder matches.  WWE does them way too often and there's not much new under the sun; it's like trying to stand out from the pack by releasing an action movie during the summer.  That said, this was one of the better ladder car wrecks in recent years.  Certainly not on par with last year's North American Championship match, but definitely a fun outing with lots of cringe-worthy bumps (mostly taken by Kyle O'Reilly).  The talent involved was strong enough to make everything look great and painful.  This was basically twenty minutes of chaos.  Late in the match the Forgotten Sons' third man Jaxson Ryker interfered and laid everyone out, proceeding to set up a ladder for one of his pals to climb.  But all six men he attacked ganged up on him and beat him down with said ladder, taking him out of the equation.  The match boiled down to Wesley Blake and Steve Cutler prepping their ascent only for both Street Profits to take them out after Montez Ford pulled a Shelton Benjamin by vaulting from the top rope to the ladder and retrieving the belts.  Very good ladder match, even if I'm kinda tired of seeing these.  **** 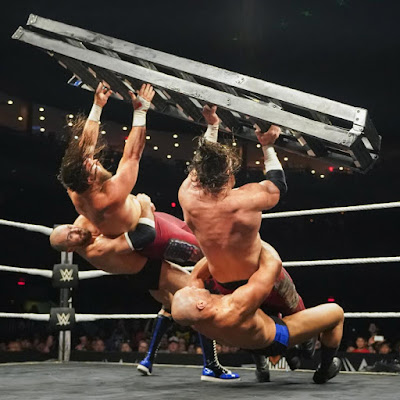 For me the weakest match (by default) was the North American Title match, with Velveteen Dream defending against the returning Tyler Breeze.  It was great to see Breeze used to his full potential again, since his main roster run was a burial from start to finish.  I hope NXT brings back other call-ups who are being wasted - Luke Harper, Chad Gable, Nakamura, etc.  Dream and Breeze had a very energetic, well-worked 17-minute match, with Dream attempting to demonstrate how showboating is truly done.  At one point the match had spilled to the outside and Dream rammed Breeze's head into the announce table to incapacitate him long enough to mock Breeze with a selfie.  This was amusing.  The match built to a series of traded big moves and finishers, with Breeze countering the Purple Rainmaker by getting his knees up and hitting the Unprettier for a really close nearfall.  Dream grabbed the belt and threatened to use it but Breeze got it away, which distracted the referee long enough for Dream to hit the Dream Valley Driver and Purple Rainmaker for the win.  A very good match, though a step below Dream-Riddle from New York.  ***1/2 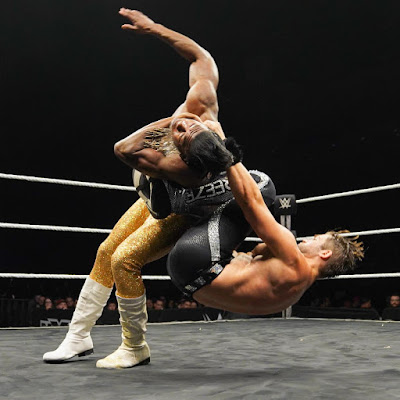 The shortest match of the night was a 12-minute Women's Title match, as the dominant Shayna Baszler had probably her best outing yet against firebrand Io Shirai.  Shirai took it to Baszler from the start, not wanting to back down an inch.  Shayna twice did a snapmare and teased a kick to the back but instead disrespected Shirai with a light tap to the head.  Shirai had had enough and returned the favor but slapped Shayna across the face.  Baszler did the Reality Check to Shirai's arm, which then became the main target for much of the bout.  Shirai hit a moonsault to the floor and set up another one in the ring but Jessamyn Duke and Marina Shafir tried to run in.  Suddenly Candace LaRae cut them off with a kendo stick attack.  But Shayna locked in the choke on three separate occasions, the third of which proved inescapable.  This finish looked great, as Shirai struggled to break free and nearly got the ropes a few times before tapping out.  After the match Shirai flew into a rage and attacked Baszler with the kendo stick, followed by two moonsaults (one with a chair, which looked sick).  Baszler sold this for a long time before leaving the ring, and I imagine this will set up a rematch.  This was shorter than I wished but really good.  ***3/4 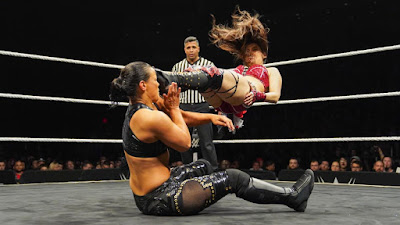 Our main event was another spectacularly epic NXT Title match between Johnny Gargano and Adam Cole.  As great as the New York match was (and it was fantastic), I actually liked this one better.  These two cut an incredible pace for a 32-minute match, bringing to mind the one-hour Okada-Omega draw.  The match started out with smooth grappling and quickly escalated into the big moves.  On the outside Gargano hit a double stomp on Cole's arm which looked brutal, but Cole countered later by superkicking Gargano's knee and working it over for much of the match.  Later in the match they had a superkick battle, with each man fighting through each superkick until they caught each other with simultaneous superkicks outside the ring, resulting in a very close countout tease.  After a series of finishers and traded finishers, Cole brought a chair into the ring but got it superkicked back into his face.  Cole motioned for his stablemates to interfere, which distracted Gargano long enough for Cole to hit DDT.  Cole went for Last Shot but Gargano collapsed to avoid it (a la Okada-Omega II), and slapped on Gargano Escape.  Cole elbowed Gargano's bad knee to get out of the hold and hit Panama Sunrise (for the second time in the match) and another Last Shot to win the title.  This was goddamn incredible.  Aside from a moment or two of inappropriate no-selling this match was damn-near perfect.  Gargano has to be NXT's MVP over the last two years and at the risk of sounding selfish I hope he never gets called up; I wouldn't trust the main roster crew to book Steve Austin correctly these days.  Just an awesome Match of the Year contender.  ***** 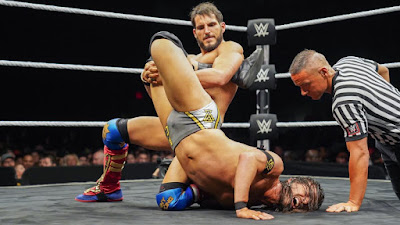 NXT once again proved their utter superiority over the main roster (as though they needed more proof) with a stellar five-match card that culminated in one of the best matches of the year (which for me was even better than Gargano-Cole I) while delivering a great undercard.  Can't ask for much more than what we got.  As I said before, NXT is absolutely on fire right now.

Best Match: Johnny Gargano vs. Adam Cole
Worst Match: Velveteen Dream vs. Tyler Breeze - when your worst match is ***1/2, you've put on a helluva fucking show.
What I'd Change: I'd like to see the women get more time in general.  I know Baszler's style involves shorter matches but I think Baszler-Shirai could have a great 17-18 minute match.
Most Disappointing Match: Nothing really
Most Pleasant Surprise: That Gargano-Cole could top their first match
Overall Rating: 9.5/10


Posted by Justin Enuffa Ballard at 10:09 AM