It’s been a chaotic week; my last finals week is on the horizon, and I didn’t get around to NXT until today. I thought it’d be a great break, and I’d be able to sit back, and relax to my favorite brand in professional wrestling.

Well, I was to be surprised.  The show opened with the commentators recapping Joe’s victory in Lowell, with promises that we’d hear from Joe later tonight.

Oh fuck me, this was a sign of things to come tonight. Let’s start with the good, being that Eva Marie is a really good heel. She’s good in the sense that she’s not doing things that people like or trying to be liked out there at all. She spent the majority of this match in rest holds and cutting off Asuka’s offense. Now the bad, she still really can’t do much. She has the basics down, but I still don’t think she understands ring psychology. And I don’t know if she can learn that now if she hasn’t learned it yet. 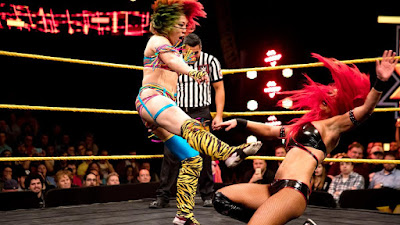 *1/2 for a boring match. Terrible match that ended with a spin kick. Best part was the tease for Nia Jax vs Asuka.


They showed clips of Joe and Balor from Lowell, and made it out that Finn injured himself on a running dropkick against the guard rails. The pop from Joe’s win was ridiculous, and they showed a collage of tweets showing the finished synced up to play simultaneously that was awesome.

We got a reaction from Joe, where he talked about how he knew he’d survive and that Finn would not. I hope he breaks Finn’s record (which stands at 292 days).

If you’ve ever seen the Hardy Boys in 1996 when they were being squashed on consecutive RAWs, you know what these jobbers looked like. I wasn’t around for Anderson and Blanchard’s run in the WWF, but if I found a TV from the 90s and saw one of their matches, I think it’d look like this. Literally no offense was given to Parker and Lee. Ended with a Shatter Machine to Lee.

**1/4 for a really fun mugging. Revival cut a promo after stating they wanted the belts back. The sad truth dawned on me that the Main roster’s Tag Division will never be as good as NXTs perpetually is.

Dammit, just as I was saying how deep the division was, too. This was a match with two teams that, honestly, need a good opposite to work with. I was too busy pouring myself another Jack and Coke to take many notes, I’m sorry. Wrong team won with the top rope assisted Rough Rider.

*1/2. Revival attacked Hype Bros. after the match, which made me happy.

I needed to refill my glass again after this match. It’s not that it was bad, it was just slow, and boring. Aliyah is a part of this third generation of women signees who made her singles debut tonight (I think). The crowd was so dead I thought we were on the Road to Dontaku (Thank you for the three people who read this and give me a pity laugh). Carmella won with a thing that was not a Koji Clutch.

*1/4 and hopes that Aliyah shows more promise as we go.


Elias Sampson promo whining about facing Nakamura. MY mind was wandering about 5 seconds in. I’m not sure if I like Sampson was a wrestler yet, but the gimmick is definitely holding him back.

I have determined that Sampson is a good worker, and did not mess anything up in this match. I was a little peeved at first that Nakamura was fighting Dillingers and Sampsons, but it’s a good way to get people unfamiliar with him to know him. Originally I was questioning Nakamura in WWE, thinking Okada or Tanahashi would be the better fit, but I realized that his charisma is completely overpowering and he came in with the air of badass. Shinsuke put Sampson away with the Kinshasa. 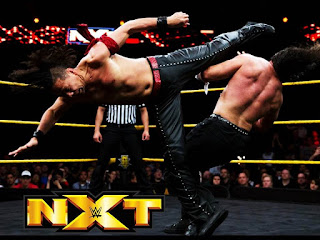 **1/2 for an okay match that did what it needed to do. I hate the Drifter gimmick but I’m doing my best to get over my bias.


This week’s NXT was...shaky. It’s a sign of the shifting times, because it feels like we’re shifting to a touring brand and therefore a touring TV style, with shorter matches that make you want to see more. This is a little saddening, but I understand the need to change. But one thing has to be remembered for the future.  We’re on the collision path to Nakamura vs. Samoa Joe.

Let me grab my popcorn.
Posted by Justin Enuffa Ballard at 9:23 AM