Welcome to a WWE product devoid of archaic tropes like "heroes" and "villains."  In today's world there is no such thing; everyone is various shades of gray, and not in the same way they were during the Attitude Era.  Back then it was clear who we were supposed to identify with.  Now it's a nebulous blur, and as long as a wrestler gets some kind of reaction, cheers or boos, that makes them by definition a star.  Hell, a mega-star. 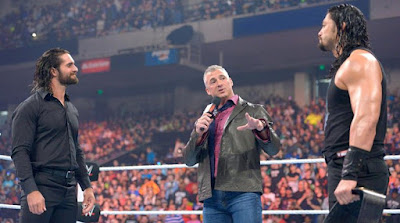 This seems to be WWE's new mentality in 2016.  At least that's how they're rationalizing the continued push of Roman Reigns as the company's top babyface, despite 80% or so of their fanbase despising the guy.  At Extreme Rules JBL actually articulated that last part, twice.  Something to the effect of "Whether you cheer or boo Roman Reigns everyone has a passionate reaction to him.  That's the mark of a megastar."  The contortionism of WWE's logic is truly migraine-inducing.  "We like this guy as the top hero, but none of our fans do.  Eh, fuck it, as long as they react to him somehow that means he's over."  Yeah that's not how a top babyface works guys.  If the audience doesn't like the top good guy, that means they aren't emotionally invested in his journey, except in the sense that they'll pay to see him lose.  Congratulations, you've just established your top heel.  I mean that's the whole basis for professional wrestling.  The audience pays to see one guy win and another guy lose, and they really want to watch that scenario play out.  At a certain point you can't force on us which of those guys is which.  When Roman Reigns defends against Seth Rollins at Money in the Bank, guess which guy the crowd's gonna be rooting for.  Despite your best efforts, Seth Rollins is now the company's top babyface.  You can have him insult the audience all you want, but as long as he's in there with Resentment Roman, he's the good guy and Roman is the heel.  You're shoveling shit against the tide by trying to shoehorn these two guys into the opposite role from what they're suited for.

Booking Roman the way we saw at Extreme Rules, where he kicked out of two Styles Clashes (one on a chair) and withstood a dozen chair shots only to hit a spear out of nowhere for the win is only going to make the fans hate him more.  The audience doesn't want another SuperCena, we already have the one.  And say what you will about John, even at his least popular he was still getting cheered by half the crowd.  Reigns doesn't have anywhere near that level of fan support.  I fail to grasp why the company can't see how much better and more over Reigns would be as a monster heel.  After a year or so the crowd would very likely grow to love Reigns, because it would feel like he earned the role into which Vince so desperately wants him cast.

The Reigns situation (and overall lack of likable heroes in WWE) reminds me of Zack Snyder's gloomy, morose Batman v Superman, in which there was literally no one to root for and no true "good guys."  If John Cena was the wrestling equivalent of the traditional Superman character, a straightlaced, two-dimensional good guy without a flaw, then Reigns is Zack Snyder's Superman, a monosyllabic, brooding mope whom we just have to accept as a hero because we're told he is.  Nevermind if the guy being presented as the villain is a hundred times more compelling and sympathetic.

As for Extreme Rules itself, the show was fine.  Not bad, not great.  Most of the matches fell into the 2-2.5 star range.  The two notable exceptions were the exceedingly fun and furiously paced Fatal 4-Way which showcased how great the Intercontinental division is right now (harkening back to the days when the Intercontinental division was the best part of the show), and the fairly epic main event in which AJ Styles once again proved why he's one of the best in the business, bumping for Reigns like a ping pong ball.  I'd call the main event the Match of the Night, and aside from the SuperReigns act I had no problems with it.  I was also over the moon excited to see Seth Rollins return and lay out Reigns with a Pedigree (though it's time for Rollins to have his own finisher). 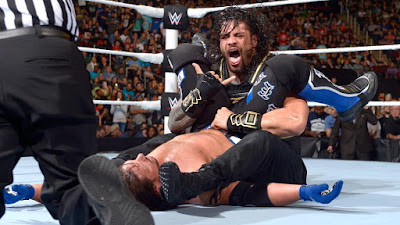 Rollins should be positioned as the avenging angel, back to regain the Championship he never lost, from the guy everyone hates, after being forgotten by his Authority handlers.  How perfect would Rollins be as an anti-hero in this scenario?  Nope, gotta keep him a heel even though the fans overwhelmingly prefer him over WWE's #1 babyface.  It's all just fucking baffling.  The upcoming matches between them should be excellent, but it's like WWE itself has become the heel.  They're stickin' with their guy with whom hardly anyone connects, and trying desperately to turn everyone against the guy the fans really like.  WWE isn't even tone-deaf anymore, they're just willfully ignorant of who their audience wants.

All things being equal, if you were running a wrestling company and you'd handpicked the next top babyface but your entire audience preferred a different dude, wouldn't it be more financially sound to simply go with option B?  I'm not sure where the logic is in saying, "Reigns will make us more money as the top guy than Rollins."  Well no, not if the vast majority of your viewers don't like Reigns.  Where's this extra revenue supposed to be coming from?  The casual fan?  That's becoming a smaller and smaller segment of your overall audience because you've saturated the market so heavily.  And if the casual fan turns on RAW and sees the entire crowd booing Roman Reigns, what do they glean from that?  They're naturally going to assume he's the heel, no?  So can someone explain the bogus argument that Reigns will bring in more mainstream viewers than someone like Rollins? 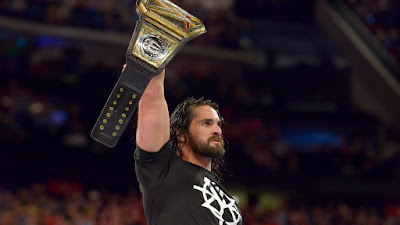 When it comes down to it there is no logical explanation.  I guess that's where this week's bullshit story comes from, about Reigns being a "megastar" because everyone in the crowd reacts to him.  Sure, most of it is negative "go away" heat, but dammit, it's a reaction.  Apparently Vince McMahon has the mentality of a neglected middle child.  Any attention is good attention in his mind.  Christ I'd love for WWE to be run by a grownup....
Posted by Justin Enuffa Ballard at 12:38 PM