This week’s episode of NXT saw the return of Finn Balor to the program. Will the former champion break the funk that NXT has had in recent weeks? Or will he be in just another squash match? Will American Alpha come back to Full Sail? Will the streak of 3rd generation women signees jobbing continue? Would I be asking if any of these weren’t true?

The show opened with Finn coming out to a great ovation from the Full Sail crowd. He came out, with his typical video and music, but was overall somber as he walked to the ring. While this is happening, we’re reminded that Nakamua faces Alex Riley tonight. Finn took a mic and talked about his war with Joe, how each match could go either way.

The following are the exact words I wrote down for the next 3 minutes:

They showed how social media exploded with Eric Young’s arrival in NXT, and they showed the full video of Eric Young being interviewed that had surfaced the week before his NXT TV debut. Really excited for Eric Young to be here, can’t wait to see what he can do.


American Alpha defeated Corey Hollis and John Skyler, in another example of showing a potential new team showing up to go against an established team. The opposite team got just enough heat so that Jason Jordan could get the hot tag. Part of the way through, Corey Graves called this match "a mugging" and I can only have the delusion that Corey reads my reviews.  Towards the end of the match, the Revival came out on stage to have a stare down. At which point, Jason proceeded to pull his singlet straps back up, to remove them again and go for the finish. They hit Harris with the Grand Amplitude.

**1/4 for, yet again, a basic match used to keep American Alpha fresh in the audience’s mind. Definitely looking forward to the eventual Revival/Alpha rematch.


There was an indescribable Nakamura promo that lasted all of about 10 seconds. I could not begin to describe how awesome this was. I command all of you to find the promo and following match.


Shinsuke Nakamura defeated Alex Riley in a match made of concentrated awesome. This match consisted of about 20 seconds of Riley offense, then approx. 75% of all of Nakamura’s spots. Kinshasa ended the match within 5 minutes. 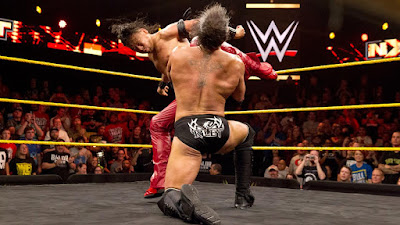 
Regal was chatting with Austin Aries in the GM office when Blake and Murphy interrupted. Aries verbally undressed the two, before Regal made a match for next week, Blake and Murphy against Aries and a partner of his choice. This may be Bobby Roode debuting, anything else would be a disappointment to me.


Alexa Bliss defeated Rachel Ellering, showcasing another 2nd generation woman in NXT, as well as being another graduate of Lance Storm’s wrestling school. It was about as good a match as you could expect from Alexa Bliss dominating a match. She eventually won with the Sparkle Splash.

*1/4, and before you ask I checked, and neither Arn Anderson nor Joe Laurinaitus have daughters. But they do both have at least one son, so there’s potential there


There was a Bayley promo backstage, which Nia Jax crashed and started talking down on Bayley. Bayley said that she choked her out once, and she could choke her out again.  Before the main event they promoted Nia and Bayley for next week, along with Blake and Murphy vs Austin Aries and a partner of his choice. Where’s my Dirty Heels shirt…


Finn Balor defeated Elias Sampson in a lackluster return for Finn Balor. They’ve done a good job so far building up to Finn’s desire to get the title back, and really this match was only a stepping stone for that eventual rematch. The Bloody Sunday has been renamed 1917, and was used to beat Sampson. 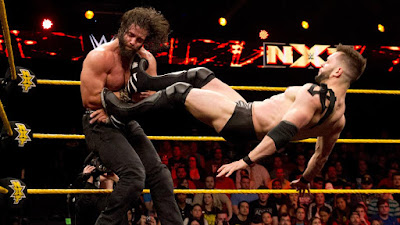 **, because I liked watching Sampson get dropped on his head.


Overall, I guess the show was really not bad. While the entire card was composed of mostly filler matches, there was a lot set up for next week, and I can’t wait for that show.
Posted by Justin Enuffa Ballard at 8:54 AM