You Used to Be Sooooo Good: Tool

Welcome back to our semi-regular feature. This one's a tad different. Typically we take something that was once AWESOME but now sucks. This time, we're talking about a band that is badass and great but is MIA except for a bunch of mini-tours over the past year


TOOL: YOU USED TO BE SOOOOOO GOOD (AND PROBABLY STILL ARE) 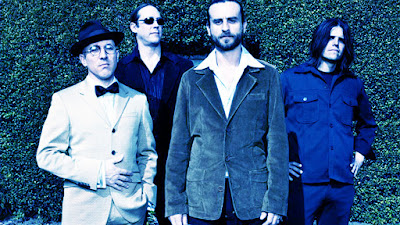 DAN: I remember the first time I heard Tool. Back when MTV used to be a music channel and not a place for teen whores to show off their bastard kids, I watched the video for "Sober" off Tool's first album, Undertow. The first impression I had wasn't so much about the music but the visual components of this truly bizarre stop-motion Claymation-type video.


I knew fuck all about the band, and it stayed that way until MTV once again showed me a video by them. Ostensibly named "Track #1", this song was enough to intrigue to search out the band behind this odd videos. When I purchased Ænima I realized the name of that song was actually "Stinkfist" and MTV changed it because EWWW HANDS IN BUTTS.

But that album was hypnotizing. It was MILES away from the grungy pop-ish like rock music I was listening to at the time. The chord progressions, the insanely elaborate drum beats and the one-of-a-kind vocals of lead singer Maynard James Keenan made for a band the likes of which mine ears had never heard. I needed more after listening to Ænima. In what turned out to be a pattern, it would be a long wait.


JUSTIN: Goddammit Tool, where the fuck are you???  I didn't get into Tool until 1998 when I saw them at Ozzfest.  I was familiar with a few songs like "Sober" and had heard snippets of "Stinkfist," "46 & 2," and "Ænema," but never really paid them that much attention because I was still mostly stuck on traditional metal.  Then I saw Tool in concert and was struck by their weirdness and the kinda trippy energy of the music, plus all the odd-time signatures.  That week I went out and bought Ænima, and while it took several listens to really get into (lotta stuff goin' on there), it eventually became one of my all-time favorite albums.


Then I waited for a new Tool album.  And waited.  And waited.  Meantime Maynard had launched a side project called A Perfect Circle, which contained a lot of Tool's sonic hallmarks, plus Maynard's uniquely awesome vocals and super-intelligent lyrics.  But the songs were more accessible and this was a very easy listen.

Finally the following year (five years after Ænima), their third full-length album Lateralus came out.  Dan, I remember you and I waited in line at Newbury Comics to pick that one up, then went back to my place where my roommate Bryan was hangin' out with a drunk-off-his-ass Mikey Dudas (thanks to 13 shots of Jaeger).  We listened to the album front-to-back as I recall and were duly impressed.  It wasn't the masterpiece Ænima was, but Lateralus is still chock-full of classic Tool songs, in particular "The Patient," "Schism," and the title track.


DAN: To this day, “The Patient” is one of my top ten songs of all time. Just an incredible piece of music. And the drum work in the last 90 seconds of opening track, "The Grudge," is BONKERS. Just an amazing album. It didn’t leave the Discman for months. Yea, the Discman, whatever, we’re old.


The album was very dense so you had a lot to listen to and digest…but not 5 FUCKING YEARS WORTH. FIVE years in between albums for the band that had arguably become the best in the world? This will not stand; these delays will not stand, man.

Or they will, because we had to wait 1,800 days (estimated) for Tool’s next opus 10,000 Days to be unveiled on the populace. I remember when it was announced that Tool had another album coming out soon. “Eh, whatever” was essentially my response; my enthusiasms for the band were kinda muted at this point as they had no new output for a while so it took me a bit to get jazzed for them again. Plus, the first single released, “Vicarious,” was very underwhelming to me when I heard it. I was no longer a Tool-bag it seemed.


JUSTIN: Yeah, Tool faded from my immediate consciousness for a while, but in the meantime Maynard and friends released a second Perfect Circle album called Thirteenth Step, which was in my opinion a big STEP (get it?) up from their debut.  More complex songs, more variety, etc.

Then finally in 2006 (another five year wait!) 10,000 Days was released.  Like you I was underwhelmed by “Vicarious” when it debuted on the radio, but after several listens I began to love it (I LOVE it), and by the time the album came out I had a full-mast Tool-inspired chubby.  “Jambi,” despite how strange it was, also became a favorite, as did the more straightforward rocker “The Pot,” and the mournful “Right in Two.”  The album also featured two multi-part marathons, the de facto title track “Wings for Marie, parts 1 & 2,” which dealt with the physical hardships Maynard’s mother went through for 27 years (or roughly 10,000 days) before she finally passed away, and the truly bizarre “Lost Keys/Rosetta Stoned,” about some weirdo tripping on acid who thinks he was abducted by aliens.

Ultimately I ended up really loving 10,000 Days and it’s now my second-favorite Tool album.  But that was a decade ago.  A FUCKING DECADE.  Tool are apparently the Stanley Kubrick of rock bands.  Their stuff is super artsy and not at all easily digestible, yet they’ve developed a massive following despite their lack of commercialism.  Plus, they take goddamn EONS to release new material.


DAN: I felt the same about 10,000 Days when it was released. Didn’t really care and then was blown away by it. "Jambi" has some of the hardest guitar riffs Tool has ever produced. And the epically strange "Rosetta Stoned" is such a meandering (in a good way) rock song. The album was awesome and again had me wanting more.


And now they’ve disappeared. Yet again. Like a musical Jimmy Hoffa, no one knows where they’re buried.  The guys in Tool seem to have better things to do than being in a band. Seems odd, as they’re some of the most talented musicians around with a hugely loyal following.

They’re on tour now, so any hope of a studio album forthcoming is poor at best. It’s a shame, because the four studio albums they have released are easily the smartest, most challenging records I’ve ever heard. I need more Tool in my life, but I don’t think that’s happening anytime soon.


JUSTIN: Well they did have an ongoing lawsuit with their insurance company(?) which delayed recording of this upcoming album, and now that it’s resolved they’ve been in the studio the past couple years.  But their recording process is typically glacial.  So who the hell knows when this album will be done?  It would've been nice if it came out in 2016 so they’d at least have that “ten years later” thing.

It’s insane that they’ve been around almost 25 years and only have four (FOUR!) full-length albums to their name.  So bizarre.  I guess we’ll just hafta make do with those until the erosion-like process is complete and they drop a new one.


Thus ends a column where we didn’t fight about anything and agreed that Tool is still a killer band, just MIA. If their output matched their talent levels, we’d be listening to the 8th or 9th album full of original material. Alas, here I am, still listening to 10,000 Days, in anticipation of some, ANY new material. A girl can dream, can’t she?