Wow, already another AEW show this weekend.  Keeping up with this, the G1, Extreme Rules and the Evolve show all in the span of two days is gonna be murder.... 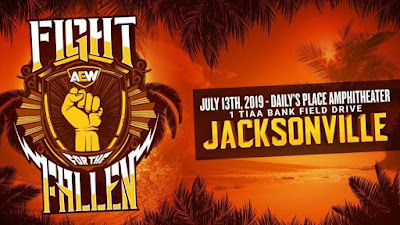 AEW Fight for the Fallen is this Saturday, with the box office proceeds going to the victims of gun violence.  I can get behind that.  Like Fyter Fest two weeks ago this is one of their "minor" big shows, broadcast for free on B/R Live (in the US at least), and the matches are partly designed to build to All Out next month.  But a number of them should be quite the spectacle in their own right.  We have a lean, five-match main card with two pre-show bouts.  Let's get to it. 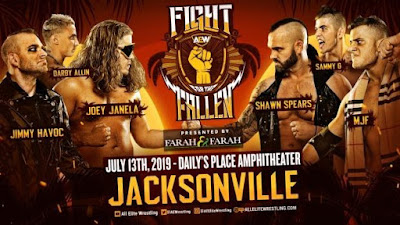 This will be a fast-paced showcase match for six of the company's up-and-comers.  Allin established himself nicely in his 20-minute draw with Cody, Joey Janela absorbed unfathomable punishment in an Unsanctioned loss to Jon Moxley, MJF has already shown himself to be one of the industry's strongest heel promos, and Shawn Spears made headlines by attacking Cody with a chair and inadvertently scraping off part of his scalp (Jeezus that was grotesque).  Since they're obviously setting up Cody vs. Spears at All Out, I'll pick the heels to win here.  Should be a fun way to rev up the crowd. 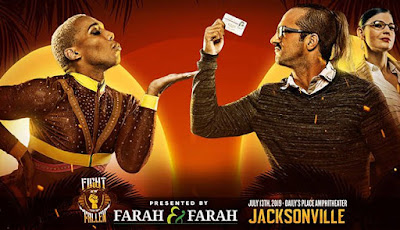 I know very little about these two beyond their gimmicks, so this will be an introduction to both for me.  I'll go with Sonny to get the win. 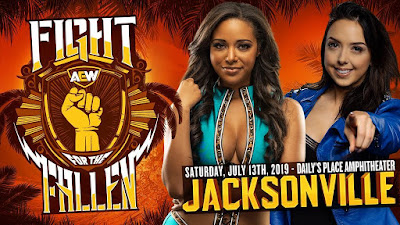 I suspect this is a showcase match for Brandi, against an experienced former Impact Knockouts Champion who can make her look good.  It'll be interesting to see how she does in the ring, since she's best known as an announcer/valet.  I'll pick Brandi to go over. 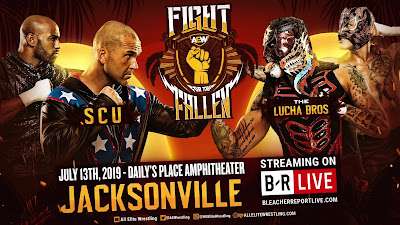 This should be a helluva tag match, with Kazarian and Sky mixing it up with the incomparable Pentagon and Fenix, one of two potentially amazing tag matches on this show.  Unlike SoCal's previous two AEW outings I think this will get some significant time.  Lucha Bros are coming off two consecutive losses on AEW shows so they need this win. 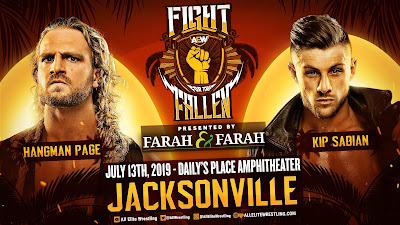 Chris Jericho has announced he'll be at FFTF, so we could see him get involved here to screw over his future AEW Championship opponent.  But if I were booking I'd save any Jericho run-in for after the match and give Page a solid singles win to further establish him as one of the Big Five in the company.  This will hammer home to the casual observer that Page is a major young star that they're building their future around.  Post-match they should absolutely have Jericho either cut a promo on him or attack him though. 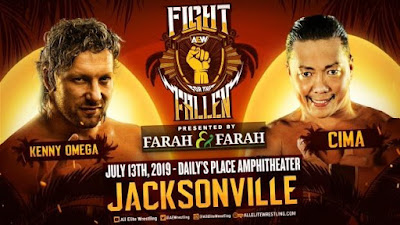 This should be fantastic, the spectacular showman vs. the puro sensation.  Sit back and watch the fireworks.  No Jon Moxley run-in here, since he's making his G1 debut the same day.  This could steal the show.  Kenny obviously needs to win leading to his Chicago showdown with Moxley. 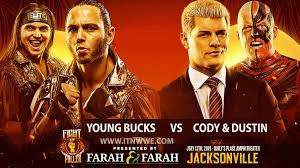 I have to think this match is going on last; they announced it at Double or Nothing after the incredible Cody-Dustin match, via a poignant Cody promo.  This match has the most compelling story going into it.  It'll be an interesting clash of styles, with the Bucks' exercise in excess meeting Cody and Dustin's minimalist approach.  But I expect a classic.  The Bucks are 2-0 in AEW shows so a loss here wouldn't hurt them.  Cody and Dustin should win and have an emotional post-match celebration.


And that's the lineup - simple, succinct and likely a very easy watch.  AEW is laying a great foundation for both All Out and their impending TNT debut.  Unlike WWE PPVs these days, the very idea of which depresses the shit out of me, AEW shows have such freshness and optimism about them.  It's gonna be a fascinating few months.


Posted by Justin Enuffa Ballard at 9:14 AM