The G1 Climax is upon us once again, and this year's tournament has a whole slew of fresh faces.  On paper this is one of the more exciting G1 lineups I've ever been privy to; the A Block is exploding with star power, while the B Block has a ton of intriguing first-time matchups (and some big names in its own right).  The 2017 and 2018 editions have to be considered the two greatest wrestling tournaments ever held, but 2019 has the potential to give both of them a run for their money.  We're about to see some great shit. 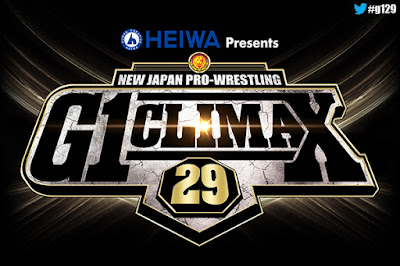 My colleague Landon Wayne and I decided to do things a little differently this year: I'll be previewing the A Block participants and he'll cover B Block at his site falconarrowemporium.blogspot.com - don't forget to check it out when you're done reading here!  We will however each give our three most anticipated matches from both blocks, plus our respective Finals predictions.

So let's get to it.  Here are the A Block participants....

The five-time IWGP Champion has gone into this tournament with the title more often than without, and always finishes as one of the block leaders.  He's won the whole tournament twice (2012 & 2014) and never fails to deliver at least one or two MOTY candidates.  He's obviously not winning this year (though he was so unstoppable in 2017 I actually picked him to win it despite being the champ), but he'll look to spoil it for the eventual block winner.

Man, if there was ever a year for the Ace to sit out the G1 it's 2019.  Tanahashi has looked really rough lately and is clearly hurting a lot.  I'm not sure how many classic Tana matches we'll see in this tournament but hopefully he can rise to the occasion.  Maybe he's been working us all and he's not as banged up as he looks?  Tana is a three-time G1 winner (2007, 2015 & 2018), but the first trophy didn't come with a WrestleKingdom #1 contender certificate.  He's also the only man to successfully cash in said certificate (kinda crazy when you think about it - the G1 winner is 1 for 7 at the Dome).  Tana's not repeating.  There's just no way.  But let's hope he can still deliver like the Ace we all know and love.

Ibushi is my pick to win the A Block.  Whether he goes the distance and nabs his first G1 briefcase I'm not sure, but I'd say his trip to the Finals is a mortal lock.  He's committed to NJPW for the rest of his career (supposedly anyway) and it's his dream to become IWGP Champion.  I think this will happen for him at one of the next two WrestleKingdoms.  My only hesitation in picking him as the overall winner this year is that his last scheduled tournament match is against Okada himself, and I can't see them giving us the eventual WrestleKingdom 14 main event here.  But I have no qualms in picking Ibushi to make his second consecutive appearance in the Finals.

Ospreay might be the participant I'm most excited for.  After winning his second Best of the Super Juniors trophy in June (in an absolutely mindblowing match against Shingo Takagi - you need to watch it if you haven't), followed by another Jr. Title win days later, Ospreay is representing his division in the heavyweight tournament.  Will has been on fucking fire in 2019, delivering multiple MOTY candidates already, but he could potentially blow it all out of the water in this tournament.  I'm hoping he'll be one of the frontrunners deep into this thing; it would do wonders for his star power and for the Jr. division as a whole.  Ospreay could very well steal the show again.

One of the most dangerous guys in the last two G1s is Mr. Pretzel himself, Zack Sabre Jr.  Zack's matches are always fascinating as he finds new and creative ways to inflict pain, and he's shown many times that he can make dudes tap out without warning.  He won't be one of the top two finishers in the block but he could play the spoiler for someone.  Zack is joy to watch for me.

Our second G1 newcomer is former NOAH/ROH/NXT star Kenta.  I'm so glad Kenta is free from the creative shackles of WWE, where a combination of injuries and simply not being a good fit plagued his entire run there.  It'll be interesting to see how his work here stacks up with the great stuff he was doing in 2005-06.  His inclusion should be refreshing at the very least.  I don't see him being a block leader but he's hoping to earn his New Japan stripes in the most grueling of tournaments.

Sanada is no doubt a future main event regular in New Japan and keeps growing year over year.  For me he's still not quite at the IWGP Championship level, though he's turned in some very strong title bouts with Okada.  This will be his fourth consecutive G1 appearance and I could see him getting key wins to earn himself future title shots.  But he won't win the block.  Also he's gotta shave that quaker beard - it looks ridiculous.

Sanada's partner Evil is also entering his fourth G1, and this tournament has proven him a fantastic worker when he wants to be.  He had incredible showings against Omega and Okada in 2017 but failed to crack my top ten last year.  Still there's plenty of top-notch talent in this block with whom he could steal a show or two.  I see him finishing in the middle of the pack.

Making his fifth G1 appearance, Archer has to be one of the more underrated big men in the business.  I'm a little sad Davey Boy left New Japan, as I liked Killer Elite Squad a lot.  But Archer has the chance to really shine here, against a bevy of capable opponents.  I'm not all that excited about Bad Luck Fale being included again but Archer vs. Fale should be a good slugfest, and Archer also works really well with smaller opponents (his NJ Cup match with Ospreay was quite good).  Archer may get an upset win or two.

This will be Fale's sixth consecutive G1, and his role is almost always to ruin someone else's tourney and challenge that person for a title on one of the fall PPVs.  Sweet merciful Jeezus, if they have him beat Okada and book Okada-Fale at King of Pro-Wrestling I'm gonna slap someone.  That is one match I need never see again.  I find most of Fale's matches pretty dull so I'm not expecting many classics from him here.  He'll probably get his NJ Cup win back from Ospreay though.

Kota Ibushi vs. Will Ospreay - Their match at WK13 was great, this one should be even better.

Kazuchika Okada vs. Will Ospreay - I loved their Anniversary show match last year but it left a lot on the table.  Here's where we see them pick all that stuff up.

Kazuchika Okada vs. Kota Ibushi - We saw these two wrestle at the 2017 Anniversary show, albeit with Ibushi under a mask.  Now we get to see them fight for real.  I predict an Ibushi victory over the IWGP Champ, planting the seeds for a future title shot and giving Ibushi an out if he doesn't win the Final.  This could very well be the match of the tourney.

Let me preface by saying there are a ton of really exciting matchups in B Block, and the G1 debuts of Moxley, Cobb and Shingo are going to give this block a novel feel.

Tomohiro Ishii vs. Jon Moxley - Oh man, Moxley has so much to prove in this tournament and I think he'll do it in spades.  These two are going to try to murder each other for our enjoyment.

Tomohiro Ishii vs. Shingo Takagi - Shingo is fast becoming one of my favorite New Japan guys; he's been crushing it ever since he arrived and I'm stoked he decided to throw his hat into the G1 like his fellow BOSJ finalist.  Ishii vs. Shingo will be electric.

Tetsuya Naito vs. Jon Moxley - I'm really excited for basically every Moxley match but against a dynamic performer like Naito we could see a career highlight.

I hesitate to even say it, but I think Naito vs. Ibushi is a virtual certainty as the G1 Final.  They vowed never to fight each other again, and they probably shouldn't, given how prone both of them are to try to die in each other's company.  But with Ibushi vs. Okada and Naito vs. White as the respective block finals, I can't see any other combination, barring a draw that sneaks another guy in.  Okada won't be in the finals because he's the champion, and Ibushi vs. White seems underwhelming to me, plus I don't see Okada vs. White as next year's WK main event.  So that leaves Ibushi winning A and Naito winning B.  Get ready for some near-death experiences, folks.  I mean the match will undoubtedly be incredible from a technical standpoint, but it's gonna be reeeeeeally uncomfortable to watch.  Hopefully they tone down their self-destructive shit this time; I'd like to see both of them still be able to walk in their 50s.  With that said, Naito kinda has to win the whole thing because if Ibushi wins, he'd be challenging Okada at the Dome, and we'll have just seen that match in this tournament.  I guess weirder things have happened but it seems odd to give away the next Dome main event in the A Block final.  So I'm picking Naito to win his third G1, challenge Okada once again at the Dome, and finally get his big title win that everyone predicted in 2018.  Meanwhile Ibushi will have appeared in two consecutive G1 finals and can be built up over the next year, and third time will be the charm.


So that's where I'm at going into G1 29.  This is gonna be something special, folks.  Don't forget to visit falconarrowemporium.blogspot.com for Landon's B Block preview!