WWE Extreme Rules 2019 Preview & Predictions: Put This Company in a Box and Throw It In the Ocean

Oh good, another WWE PPV is this weekend.  Another off-the-rails shitshow where Vince and his crack team of writers further demonstrate how hopelessly out of touch they are with the wrestling 2019 audience.  I can't wait.... 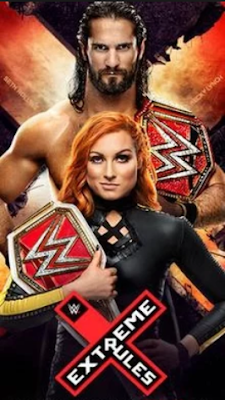 Yes, it's Extreme Rules time folks.  This particular PPV title has been around for ten years and it feels like twenty.  Actually to be fair, Extreme Rules is usually a decent show.  Last year not so much, and aside from a few matches I don't have a lot of hope for this one either.  Look at the main event, for Chrissakes.  The undercard is gonna have to carry the load, just like on a Nitro-era WCW show.  It is unfathomable to me that, in the midst of the lowest ratings RAW and Smackdown have ever posted, and coming off maybe the worst-attended WWE PPV of all time in Stomping Grounds (if it ain't the worst it's definitely up there), Vince is still doubling down on Baron Corbin, Lacey Evans and Shane McMahon as three of the featured players.  Hey Vince, NO ONE CARES ABOUT THESE PEOPLE.  Oh, but Paul Heyman and Eric Bischoff are in charge now!  Look, Heyman is an absolute genius in this industry.  I have no complaints about giving him creative power that he should've had all along.  But Eric fucking Bischoff??  The guy who's had one successful idea ever (which he lifted from NJPW), who hasn't been relevant as a creative mind since 1999?  Am I stoned?  Fuckin' hell, let's get this over with... 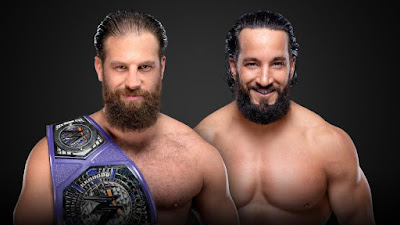 I assume this will get bumped to the pre-show.  Another CW match I don't care about but it'll undoubtedly be a good one.  Gulak just won this so I'll pick him. 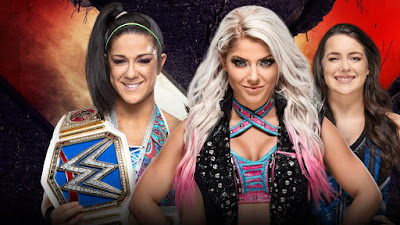 Handicap matches are stupid.  I don't like them.  If Bayley wins, Alexa and Nikki look like fools.  If Alexa and Nikki win, they had to double team Bayley to do it.  Spoiler alert: I don't think they'll win - they've been building a feud between Alexa and Nikki for weeks and one of them would have to let the other pin Bayley essentially.  Course all this does is make Bayley the third wheel in this match, and it's never a good idea to do that to the champion.  Where in the fuck are Asuka and Kairi??


RAW Tag Team Championship: The Revival vs. The Usos 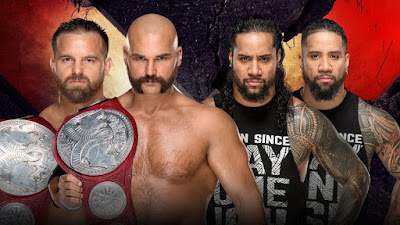 This should be a really good tag match if they give it enough time.  Both teams are great and despite WWE treating Dash and Dawson like putzes more often than not, they're still pretty over.  This should be one of the show highlights.

Pick: I'll stick with the champs to retain 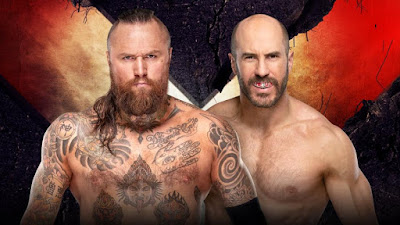 This one I'm actually looking forward to.  After months of not putting Black on television for basically no reason, they're finally resetting him against a top-notch opponent.  This should easily be a Match of the Night contender.  Black has to win here obviously; it's his first big main roster singles match. 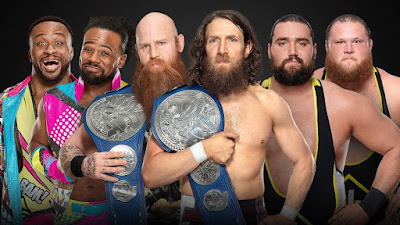 Bryan/Rowan vs. Heavy Machinery was apparently the best match at Stomping Grounds (I still haven't brought myself to watch that show), so this should be entertaining.  I have a feeling they'll want Bryan in a more prominent spot for SummerSlam so I could see him and Erick dropping the belts here.  Time for Bryan to get a proper rematch with Kofi. 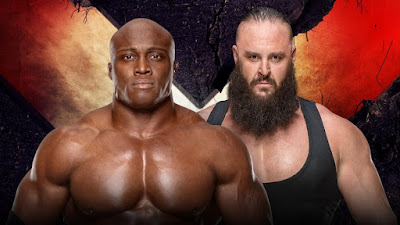 Yeah, I don't care about this at all.  These two smashed through the LED screens a couple weeks ago and were supposedly both rushed to the hospital, but Lashley was back on RAW this week like nothing happened.  If they can't bother to have these guys sell injuries after an angle like that, why should I give a good god damn?  Scrap this shit and give us Finn vs. Nakamura instead.


US Championship: Ricochet vs. AJ Styles 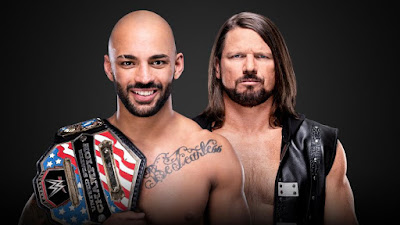 This should steal the show.  Ric is awesome, AJ is awesome, give them 20 minutes and get out of their way.  Ric just won this title last month so he should keep it here.  Then again AJ just turned heel and reunited with Anderson & Gallows, so they might have him win to keep that momentum going and let Ric chase him.  Course the way this match came about made no sense.  AJ beat Ric in a non-title match to earn a title shot the next week, which he then lost.  But he attacked Ric after the bell and that apparently means he deserves another shot.  Same deal as AJ vs. Nakamura last year.  But whatever.

Pick: I guess I'll go with AJ to win and set up the next couple months 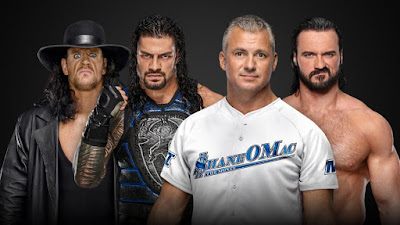 Holy jumpin' fuckin' douche canoes, do I not give a tupenny fuck about this.  Hey Vince, stop putting your stupid son on television as an active wrestler.  He's not a wrestler, he never was a wrestler, he's fifty goddamn years old now.  Fucking stop.  Jobbing out your supposed Chosen One to your son at Super ShowDown was embarrassing at best.  Tirade over.  Next tirade: Hey Taker, stop pretending you can still go at age 54.  You haven't had it since 2015.  You and Bill Goldberg almost killed each other a month ago.  Hang it up before you do permanent, irreparable damage to yourself.  You have nothing more to prove.  Move on with your life, this chapter of it is over.  It's no wonder the 18-25 demographic gives less than a shit about WWE these days.  They keep trotting out guys from twenty fuckin' years ago. 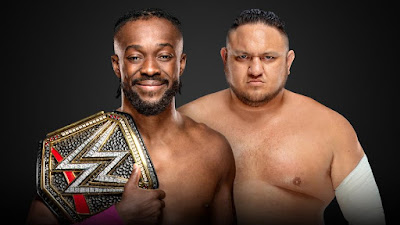 Our final good match of the night is Kofi vs. Joe.  Nice to see Joe get something meaningful to do again.  I seriously don't understand how WWE doesn't push him consistently; he's still got it in the ring and he's just about the only one who makes their cringe-inducing scripted promos work.  Joe oughta be a main event fixture by now.  Anyway, this should be a fine match as long as they don't overproduce it.  I feel like Kofi-Bryan needs to be the program going into SummerSlam, so Kofi will probably retain. 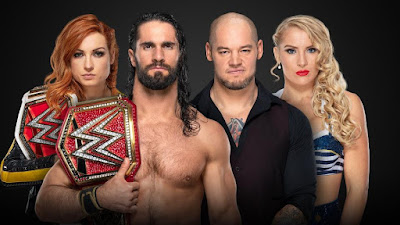 Oh good, let's waste the two most over people on RAW in yet another match involving the two worst NXT call-ups maybe ever.  Corbin's been on the main roster for three-and-a-half years now and he's still not ready to be there.  Lacey's look and character tickled Vince where he pees, and so we're stuck with her in a title program literally years before she's ready.  Both singles matches at Stomping Grounds were met with pretty unanimous revulsion, so let's do it all again!  Definition of insanity, literally.  But Vince will continue to put Band-Aids on his shitty product in the hope of popping quick weekly ratings, rather than looking at what is systemically causing people to tune out by the hundreds of thousands year over year.  The only thing that might give him the kick in the ass he needs is if Smackdown's ratings on Fox tank and they get bumped to FS-1.

Pick: Seth & Becky retain and move on to real opponents for SummerSlam, while Baron finally gets bumped down to the lower card role he belongs in, and Lacey goes away for a while to learn how to wrestle.


Fuuuuck this company.  I'll probably end up watching about half of this show but I'm going to a baseball game Sunday night so it won't be till later.  Plus I have G1 to keep up with.  Priorities.


Posted by Justin Enuffa Ballard at 11:10 AM