What to say about mother!?  That's uh....that's a movie alright. 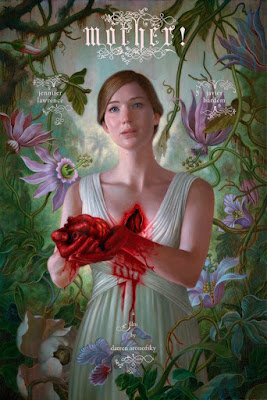 Darren Aronofsky's divisive allegory about a married couple whose tranquil country home is overrun by unwanted guests plays out like a two-hour nightmare directed by Roman Polanski (with a few Kubrickian touches as well).  The wife, played by Jennifer Lawrence, seemingly has various repeated hallucinations (including a bloody spot on the floor rotting away into the basement beneath, a beating heart inside the walls, lightbulbs exploding, etc.), while her writer's-blocked poet husband (Javier Bardem) invites more and more guests into the house, seemingly as a way to avoid intimacy with her.  Gradually Lawrence's mental state appears to become further detached from reality, and everything goes completely haywire.

That, on the surface, is essentially the plot of the film.  I can't really say anything more without involving ***SPOILERS***, so from here on in, consider yourself warned.  I'll try to be as non-specific as I can.

First off I'll answer the question of whether I "liked" mother!  The answer truly is this - I'm not quite sure.  While just about every review I've read has either enthusiastically praised Aronofsky's bold, anti-mainstream attack on the senses or comically dismissed the film as utter trash (I'm looking at you Rex Reed, you odiously miserable douchebag), my feelings rested squarely in the middle, somewhere.

I admired Aronofsky's technical prowess; mother! has the off-putting visual claustrophobia of Requiem for a Dream and Black Swan, with the down n' dirty graininess of The Wrestler.  I admired the performances across the board.  Bardem is somehow warmly menacing, like someone you want to trust if only you could shake the feeling that he's hiding a dreadful secret.  Ed Harris is affable but presumptuous.  Michelle Pfeiffer (great to see her again) nearly steals the show as a prying, socially inappropriate pillar of passive-aggressive.  And Jennifer Lawrence, while not quite giving a career performance, holds the film together as the overwhelmed homemaker who gives as much of herself as she possibly can while clinging desperately to her patience and sanity.  I admired the anxiety-building tone of the first half, where we know something is very much not right in this house but can't figure out why or what.  I admired the absolute hallucinatory anarchy of the second half, where rooms, situations and people seem to morph into something completely different the second we take our eyes off them, as in a vividly bad dream.  It must've taken incredible dexterity and confidence to stage and film these sequences, and from a visceral standpoint they work.

Where I had problems with the film lies in its (in retrospect) shovel-to-the-face symbolism.  Let me preface this by saying I saw this movie with my dad and we both came away from it with the same underlying theme.  I think there's some validity in our shared interpretation, but according to interviews with Aronofsky he had something very different and very obvious in mind when making this movie.  And once I discovered what it was, it hurt my opinion of the film somewhat.

I mentioned earlier that the film was allegorical, and that unfortunately becomes overtly clear in the second half, at which point my emotional investment in the characters and what was happening to them began to vanish.  Even the film's most visually upsetting moments failed to hit home the way they should have because I knew none of it was happening in the literal sense.  Instead it was all symbolic of a frankly unoriginal narrative to which Aronofsky didn't add anything his own, even in terms of a position or statement, at least not a daring one.  Had he left the movie completely open to one's own analysis I think I'd have more respect for it, but sadly he spelled it all out at press junkets before the film was even released.  What we're left with then is a well-made, disturbingly surrealistic vision in service of an uninteresting, shallow central meaning.

As for Paramount Pictures, I simultaneously respect their ballsiness to even release a film like this while marketing it as a conventional horror thriller, and deride their shamelessness in flagrantly lying to their target audience about what this film is.  I can totally understand now why audience scores for this film are so low - most people who saw mother! were tricked into going, and that's never a good idea if you want people to like your movie.

It's tough to assign a star rating to a film like this; I appreciated certain aspects of it a great deal but at the same time feel very let down at its ultimate lack of adventurousness.  I think any critic giving it more than ***1/2 or less than ** is staking out far too extreme a position.  It's no iconoclastic masterpiece, nor is it "the worst movie of the century" (like the aforementioned master of clickbait hyperbole Mr. Reed would have us believe).  I think it's probably somewhere in the same realm as Aronofsky's earlier film The Fountain, which took pretty striking narrative and visual risks but couldn't quite stick the landing.  Overall I think it works better than that movie, but it's inferior to the more psychologically engaging Black Swan, and certainly a few steps below The Wrestler and Requiem for a Dream (still Aronofsky's apex).  But I'm glad I saw it, and I think discussing it will prove a more engrossing activity than watching it.