The Fatal 4-Way special served as a follow-up to the previous show, as the top four men's wrestlers faced off in one match.  Also Kalisto was back with a new partner to challenge for the Tag Titles, and Charlotte began her game-changing Women's Title run.  Finally the show would feature a big debut of a well-respected imported talent.

The show opened with The Ascension vs. Lucha Dragons, which was easily the best Ascension match thus far on these specials, but still only about a two-star affair.  The Dragons provided most of the movement in the bout and the crowd ate up everything they did.  A botched sunset flip powerbomb aside, this was fine for its spot and resulted in a big title change. 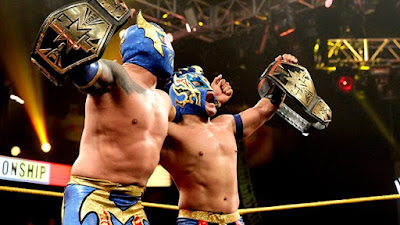 Next up was Baron Corbin vs. CJ Parker in a thirty-second squash to give Corbin a dominant win.  Not much else to say about it, other than it probably should've gone 90 seconds to better showcase Corbin's offense.

The weakest match was probably Enzo Amore vs. Sylvester Lefort.  This was a hair vs. hair match that in the end didn't deliver the promised head-shave, at least not to the right guy.  Instead Lefort's sidekick Marcus Louis got shaved.  The match itself wasn't good and never got out of first gear.  Pretty banal stuff.

Another squash followed, as Bull Dempsey mauled Mojo Rawley in just over a minute.  Not sure why they needed two matches like this on the same show, nor why Dempsey was ever a candidate for a big push.

At the time one of the biggest NXT debuts of all-time, KENTA was introduced on this show and  announced that his new name would be Hideo Itami.  The Ascension, pissed about having lost the Tag belts, attempted to ruin Itami's moment, but he fought them off.  It's strange to see this segment now, since Itami's NXT run was quickly derailed by a long-term injury.


This was a pretty lackluster show thus far, but the final two matches elevated it somewhat.  Charlotte vs. Bayley was a solid arrogant champ vs. beloved underdog story for the increasingly valued Women's Title.  Well-worked despite a couple miscues, and the crowd was invested all the way through.  Bayley was just beginning her ascent at this point and this match was all about proving she belonged in there with Charlotte.  The finish seemed abrupt as Bayley kicked out of a moonsault only to fall to Natural Selection.  Post-match Sasha Banks came to the ring and attacked Bayley but Charlotte pulled her off, having come to respect Bayley as a challenger. 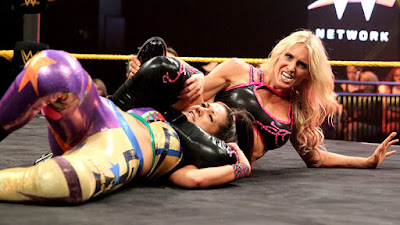 The Fatal 4-Way main event pitted NXT Champ Adrian Neville against Sami Zayn, Tyson Kidd and Tyler Breeze in a wild, sprawling affair.  The match started outside the ring with the two babyfaces paired off against the two heels, before settling into the "two guys fight while the other two recover outside" formula.  It ultimately featured some good wrestling and crazy high spots but for me didn't quite gel as a piece of storytelling due to the format.  At 24 minutes I thought it could've been trimmed a little.  Still it was a fun main event and probably the second best of the TakeOver series thus far.

With only two really noteworthy matches I'd call Fatal 4-Way the weakest of the TakeOver specials.  Booking two squash matches was a mistake, plus the hair vs. hair match was really not much to see.  The Tag Title match was passable but underwhelming given the title change.  And while the last two bouts were both good in their own way, the previous special and several later ones boasted much stronger Women's and NXT Title matches.

Best Match: Fatal 4-Way
Worst Match: Amore vs. Sylvester
What I'd Change: Lose the Dempsey squash and give that extra time to the Women's bout, and also maybe shorten the main event by a few minutes
Most Disappointing Match: Tag Title Match
Most Pleasant Surprise: Nothing here really
Overall Rating: 6/10