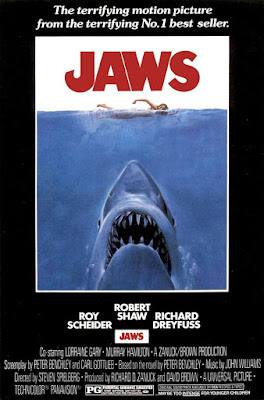 In honor of the Jaws franchise all being available via streaming, here now are all the Jaws flicks ranked in order, from worst to best. Bear in mind, I have an unhealthy obsession with one of them. I’ll let you decide which.

Easily the worst of the bunch. This one was made back when 3-D was the next hot thing but also the next hot garbage because the technology SUCKED. Bland performances, forgettable 3-D effects and the worst use of Dennis Quaid and Lou Gossett Jr. ever.  You wanna see these two masters go at it, go find a movie called Enemy Mine that has Quaid in a bad fake beard and Jr. covered in makeup resembling some sort of fish pussy. It’s TREMENDOUS.

The least offensive of the sequels. It’s got most of the original actors playing their original parts. Even though Roy Scheider was forced to make this movie against his will, he doesn’t phone it in. His Chief Brody is still a determined and downright awesome public official. Sure, it’s ridiculous. Here comes another killer shark eating folk around Amity whilst the local bureaucratic bigwigs don’t believe the Chief. The funniest parts about this one are when Brody goes to the Mayor and tells him they might have a shark problem AGAIN. Larry Vaughn wants NO part of this insane man’s ramblings about a great white eating more people. Just get the fuck out of his office so he can get a handy from Tabitha the secretary.

Please, stay with me here. The original is one of the best movies I’ve ever seen. I’ve watched it more times than I can count. All the actors are perfectly cast. The aforementioned Scheider, along with Richard Dreyfuss and Robert Shaw were the ideal men to play these roles. The suspense of not seeing the shark for most of the movie works wonderfully. And the direction by Steven Speilberg is spot on. This movie is damn near perfect. But it’s lacking one thing…

A MOTHERFUCKING SHARK THAT ROARS!!!


This movie has it all. Bad special effects. A lead character who was a minor player in the original suddenly pushed to the forefront because she had the good sense to be married to the guy who was releasing the movie.  A plot that’s IMPOSSIBLE. Follow along with me here. A shark, a fucking SHARK, has a vendetta against a very specific family and wants to kill them all so he (She? It? No clue)… FOLLOWS THEM FROM AMITY ISLAND TO THE BAHAMAS. It’s BONKERS. This movie is clearly in no way better than the original but goddammit it’s one of my favorite movies to watch. It’s so fucking bad I love it. It has no redeeming qualities at all BUT I CAN’T LOOK AWAY. I haven’t even touched on the fact that the way they kill the shark in this one is they bump into it with a boat and it FUCKING EXPLODES.

The goddamn thing just blows right the fuck up, against all laws of nature, physics and movie law. Not only does it explode, it does so in the most unconvincing, awful special effect mine eyes have ever seen. Look, I’ll buy the shark wanting to kill them, the shark follows them, hell, I’ll buy the shark roaring at them. But it explodes for no earthly reason at all. This is the point in the movie where they lost me. Yeah, the end of this movie with a hitman shark blowing up is where I stopped suspending my disbelief. But make no mistake. I love this piece of shit. And I’ll be watching it way more times than is healthy now that it’s streaming. Don’t judge me.

Posted by Justin Enuffa Ballard at 10:31 AM