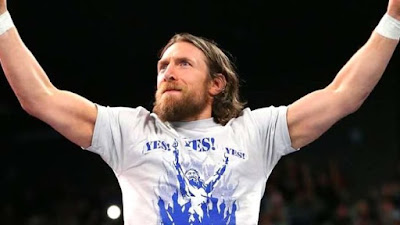 Sigh.....it's official.  Daniel Bryan has committed to spending three more years in the WWE penitentiary.  I can't say I'm surprised, but I am disappointed.  I have so little faith that this company will ever fully appreciate this one-of-a-kind talent or use him to his full potential ever again, that it's hard to get excited about this situation, despite what I'm sure was a big money deal for him.  I just hope he got the lighter schedule he was hoping for, and I hope he took that goddamn company for every penny he's worth.  But there's something seriously wrong when I'm actually sad about one of my favorite wrestlers on the planet staying in the biggest wrestling company for the most money.  This is how creatively backwards the WWE machine has become.  It's not the way this is supposed to work.  The idea of Bryan being at the forefront of the "All In" movement, participating in next year's WrestleKingdom, the MSG show, and especially the G1 was so promising, it feels like he'll always be in the wrong place at the wrong time now.  I was hoping he'd at least take a year of free agency and pull a Chris Jericho, and maybe WWE would make him a bigger offer to come back next year.

Well, enough mourning I guess.  Since Bryan's sticking with the three-ring circus, here are some things that need to happen for him, that WWE better not screw up.


1. Daniel Bryan vs. The Miz for the WWE Title at WrestleMania 35

This feud with Mizanin is just getting started, so let's do it properly.  We're getting a mixed tag match at Hell in a Cell (pretty lame if you ask me), and then in Australia there's a #1 contender match between the two.  So the logical move from there I guess would be for Miz to win and defeat AJ Styles for the belt at Survivor Series (though I still want to see a proper AJ-Bryan match as well).  Then Bryan should win the Royal Rumble (since he was robbed of that honor in 2014) and challenge Miz at 'Mania, giving him both another big WrestleMania moment (it doesn't have to be in the main event slot necessarily) and a real WWE Title run, something he still hasn't had.


2. Daniel Bryan vs. AJ Styles for the WWE Title at a later PPV

Since Bryan's return these two have only had one match, on Smackdown, that lasted 13 minutes and ended in disqualification.  Either shortly after WM35 or maybe at SummerSlam 2019 let's see these two for the belt in a real 25-minute match.

One of the primary reasons Nakamura jumped to WWE was for the chance to wrestle Daniel Bryan.  Then Bryan was forced into retirement a month later, and it looked like that dream match would never happen.  But now both guys are active members of the same roster, on the same brand, and WWE would have to be complete idiots not to book this as a major feud.  Doesn't have to be for a championship necessarily (though if Bryan does win the title at 'Mania this would be a good program for next spring), but it does need to be presented as a huge deal and kept free of the stupidity that more or less sank the AJ-Nak feud.  Just put them in a ring together and let 'em go.

Just like with AJ Styles, this is another potentially great match we haven't gotten a proper look at in WWE.  Bryan and Joe had a tremendous feud in Ring of Honor 12 years ago, and since they're both on Smackdown at the same time it would be silly not to take advantage.  If Joe fails to unseat AJ for the title this fall, maybe in a year he could be the guy to dethrone Bryan.  Or maybe you book Bryan vs. Joe later this year, from November through February.  Either way this needs to happen.

As of now these guys are on separate shows, but since Balor's doing basically nothing on RAW, let's get him moved to the blue brand sometime soon.  This would be an excellent first-time match that would raise Balor's profile and give Bryan someone suitable to work with.  It's another case of "They'd have to be insane not to."


If at least three of these five things happen over the next year or so, and WWE doesn't saddle them with stupid gimmicks or bad finishes, then they'll have somewhat restored my faith that they deserve a unique star like Daniel Bryan.  If not, then I guess I'll be counting the days till September 1st, 2021 when his contract is up again.


Posted by Justin Enuffa Ballard at 10:40 AM