WWE Hell in a Cell 2018: You've Succeeded Despite Your Best Efforts

Well in spite of its faults and WWE's "best efforts," Hell in a Cell managed to be one of the best top-to-bottom PPVs the company has put on this year.  All seven matches were at least pretty good, a few were outstanding, and most of the booking was inoffensive.  I mean, it's sad WWE's standards have fallen so far, but I'll take a consistently entertaining show from them whenever I can get it. 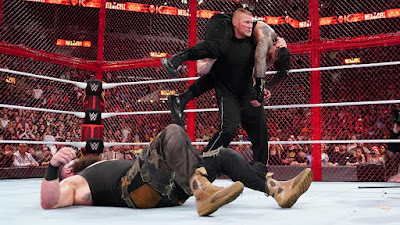 I should note that Renee Young's presence in the announcing booth is such an improvement over Coachman.  Renee isn't Jesse Ventura or anything, but unlike Coachman she has a passion for the business and actually understands it.  And since Cole and Graves actually like her there's no distracting bickering going on.  So for the first time in ages, RAW's announce team actually enhanced the matches rather than hurt them.  Kudos to Renee for being the first-ever full-time female announcer.

The festivities began with Jeff Hardy vs. Randy Orton in the Cell.  Now, it made basically zero sense for this match to be in the HIAC format, but these guys made the most of it, sidestepping the type of Cell brutality WWE no longer allows for a few new ideas.  This was worked like an old-school No DQ match, methodical but rugged.  The usual Hardy high spots were sparse, but in their place were things like Orton wedging Jeff's head between ladder rungs and stomping the ladder, both guys whipping each other with Jeff's studded belt (which perforated Orton's back in several dozen places), and of course Orton taking a screwdriver and twisting Jeff's pierced earlobe (which made me cringe like I was watching thoracic surgery).  At the end of the match Hardy set up two ladders and a table for his leapfrog spot, but instead climbed to the ceiling, swung like a gymnast, and dove for the table.  Problem was Orton had moved (way too early), and Jeff crashed through the table.  The referee inexplicably called for medical help, despite this hardly being the worst bump we've seen in one of these matches.  But Orton insisted he count the pinfall, and he did so.  Then Jeff got stretchered out.  The injury angle was goofy and absurd considering Hell in a Cell is supposed to be the most brutal match type, but overall I liked this match a lot.  Not too shabby for a match I didn't care about.  ***1/2 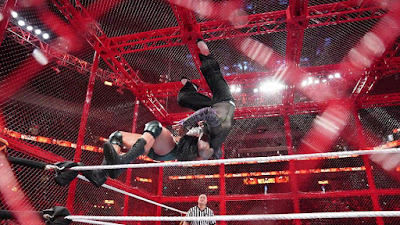 Next up was Charlotte vs. Becky for the Smackdown Women's Title.  This match was intricate, fast-paced, and really well-worked.  A few slip-ups aside the action here was crisp and athletic, reminding us all what a women's match was supposed to look like post-Women's Revolution.  Months of Carmella train wrecks robbed us and the division of serious contests, so it was refreshing to see these two get the chance to tear it up.  The crowd was into it too, solidly behind Becky (despite her being positioned as the heel).  After 14 minutes Becky countered a spear with a rollup to upset Charlotte and capture the title.  What I wanted to see next was Becky extending her hand to try and renew their friendship, only for Charlotte to reject her and turn heel.  That would've been in line with fan reactions to this feud.  But instead, stubborn WWE booked the opposite, where Charlotte went to congratulate Becky and was rebuffed with extreme prejudice.  Whatever, at least the match was really good.  ***1/2

The show stealer took place third, as Dolph & Drew (Drolph ZigglIntyre?) defended against Seth & Dean.  This 23-minute match started out basic but quickly built in pacing and intensity, with the final third chock full of wild near-falls.  All four guys worked their asses off and the crowd went right along for it, buying nearly every false finish.  This is the kind of match that revives a dying division; imagine going from Matt & Bray vs. The B-Team to this, in the span of two months.  After throwing basically everything at each other, Seth superplexed Dolph, floated through and went for a Falcon Arrow, but was interrupted by Drew's Claymore Kick.  Dolph fell on top of him to score the pin.  Goddamn helluva match and easily the best thing we've gotten from this Seth-Dolph feud.  ****1/4 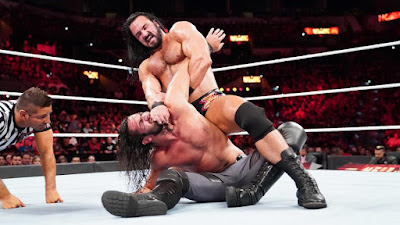 AJ Styles and Samoa Joe unfortunately were positioned to follow the best match on the show, and while their work was certainly up to the task, the crowd had come down quite a bit.  I will never understand why Vince books Smackdown to look like such an inferior brand than RAW, especially on a show that had more Smackdown matches.  But AJ and Joe put together a gritty, hard-hitting fight that started out intense with AJ jumping Joe after the bell, but settled into a somewhat leisurely pace for the first half.  In the second half though they won the crowd back, unleashing their big offense and selling the story of Joe's dominance and AJ's instinctive resiliency.  AJ took a beating here and was often running on autopilot.  The finish came when AJ went for a Phenomenal Forearm but Joe countered with the Coquina Clutch.  AJ rolled back, pinning Joe, but tapped out before the three-count.  The ref missed it however and awarded AJ the match by pinfall, and Joe was pissed.  Later in the night Joe demanded a rematch and Paige announced they'd fight again in Australia.  But Joe also insisted the match be No DQ and No Countout.  Only problem is, that stipulation would've made more sense here, since the SummerSlam match ended in a disqualification and such a stip wouldn't have prevented what happened in this match.  WWE loyalists who laud their storytelling ability make me laugh.  Regardless, this match was quite good, albeit a step down from the SummerSlam one.  ***3/4

Daniel Bryan and The Miz, along with their respective Missuses, were next.  Bryan and Miz got the lion's share of ring time, in part because Maryse isn't back in ring shape yet.  So the Brie-Maryse interactions were mostly teased but not delivered until the end.  The menfolk worked a solid bout and they kept this fun; Bryan and Brie were the angry babyfaces and Miz and Maryse were the cowardly heels who were always trying to outmaneuver them.  Late in the match Bryan made a hot tag to Brie, who jumped in and started beating the shit out of The Miz, at one point tagging him for real and opening a cut.  That's kinda badass actually.  Anyway, Brie went for a rollup on Maryse but Maryse reversed it and hooked the tights for the cheap win.  Nothing amazing but it was fun.  **1/2 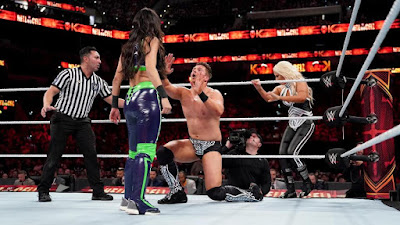 I guess the semi-main event could be considered the pleasant surprise of the night.  Ronda Rousey and Alexa Bliss worked a full-length match (I should've remembered Ronda's ribs were "injured" so this wouldn't be a squash), full of strong psychology and selling.  Ronda would start to dominate and then be unable to follow up due to the ribs, and Alexa would capitalize.  Ronda's selling was really good here (Her makeup was not) and the story was about her toughing through the pain; at one point she punched her own ribcage to fire up.  How Kylo Ren of her...  Ultimately Ronda overcame the agony, hitting her Angle slam thingy and locking in the armbreaker, prompting an immediate tapout from Alexa.  Not too shabby at all.  Ronda needs to work on her trash talking (or skip it altogether), as it kinda doesn't fit her character and comes off awkward.  The rest of her game though is incredibly strong given her lack of experience.  **3/4 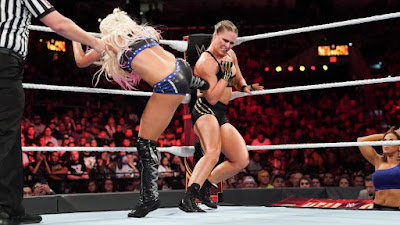 The final match was of course Roman vs. Braun in the Cell, with Mick Foley as the guest referee.  Foley didn't do much here that a normal referee wouldn't have, so I'm not sure why they included him.  The action here was fine.  Usual Roman match with brawling and big moves.  Both guys kicked out of each other's trademark stuff, and eventually Roman speared Braun through a table but Braun kicked out.  Then both guys laid there for several minutes while their respective stables came down to ringside and fought on top of the Cell.  The crowd loved this and it was fun visually, but this was kinda pointless.  None of the other four were in the match, so why spend all this time setting up a big Seth-Dolph table bump?  This just felt like a way to get the audience excited about the match.  Finally Brock Lesnar made a shocking return, kicking down the Cell door, beating up both guys with table pieces, and F5ing them.  Then the substitute referee (Paul Heyman took Foley out with pepper spray) threw out the entire match.  Now, shouldn't a Cell match have to have a real finish?  Or shouldn't there be a ten-count before it's determined neither man can continue?  Or, since Brock F5'd Roman on top of Braun, have the referee count the pin there.  This match was fine, the finish stunk.  **1/2 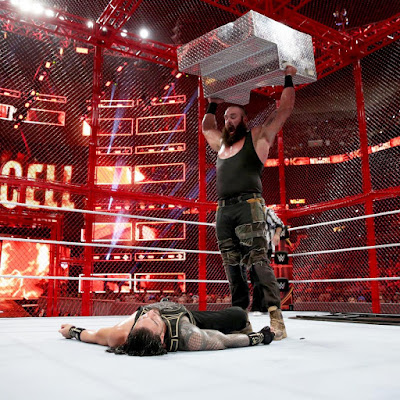 So the first half of the show was obviously much better than the second; I fear this will be the case going forward as long as Roman and Ronda are the top two stars and their matches go on at the end.  The first four bouts were all ***1/2 and above, the last three were all sub-***.  On balance Hell in a Cell was a very strong showing that could've been even better with a different match order and an actual main event finish.  WWE continues to either overthink or underthink every aspect of the show, but at least the roster was allowed to make the most of their match slots.  Imagine if this company were run by someone who knew what they were doing.

Best Match: Dolph & Drew vs. Seth & Dean
Worst Match: Probably the main event, by default
What I'd Change: AJ-Joe should've been in the Cell and gone on last, or Roman-Braun should've had a real finish.
Most Disappointing Match: I guess the main event.
Most Pleasant Surprise: Ronda's match and the opener
Overall Rating: 7.5/10

Posted by Justin Enuffa Ballard at 11:33 AM