The History of NJPW King of Pro-Wrestling (2012)

From the guy who loves wrestling "more than I love air" as our friend B-Cuddy puts it, welcome to another series of PPV History, here at Enuffa.com!


This time we're tackling the relatively new annual NJPW event, King of Pro-Wrestling.  Unlike say a WrestleMania or the January 4th Tokyo Dome shows, KOPW has only been in existence since 2012, when the company made its debut on iPPV.  But man, did New Japan kick things off with a bang.  The inaugural King of Pro-Wrestling show garnered loads of praise, winning the Wrestling Observer award for Best Major Show of 2012, as well as Match of the Year.

From then on, KOPW took its place as one of New Japan's "Big Four" PPV events; given its placement on the calendar relative to the Dome, you could liken it to a Survivor Series.  The show has had its share of classic matches and stories, and it's always the most anticipated event of New Japan's fall season, perennially headlined by an IWGP Championship bout.

So let's take a look at the brief but noteworthy history of this annual PPV....


The inaugural event is still considered one of New Japan's finest PPVs, no small feat considering how many spectacular shows they've delivered since.  A loaded card featuring numerous championship matches and one for the G1 Climax briefcase (the first year that the G1 winner was guaranteed a Tokyo Dome main event), this show had a ton of star power and variety, and one of the hottest bell-to-bell crowds I've ever seen on a Japanese PPV.  This audience sounded like 80s NWA.

The opening contest was a six-man tag pitting Yuji Nagata and Muscle Orchestra (Strong Man and a returning Manabu Nakanishi) against three members of the CHAOS stable, Tomohiro Ishii, Toru Yano and Takashi Iizuka.  This match was a wild brawl, with participants tagging in and out quickly and plenty of outside the ring shenanigans.  Of note in some of these bouts was the ringside presence of two young lions named Hiromu Takahashi and Takaaki Watanabe, better known today as Evil.  The action here was solid if unspectacular, but the highlight took place roughly midway through when Ishii and Nagata began chopping the shit out of each other.  Eventually the heels (CHAOS were solidly a group of bad guys at this point) got a cheap victory after Iizuka hit Nakanishi with his iron glove, allowing Yano to roll him up for the pin.  Nothing amazing in-ring, but this crowd was electric from the opening bell.  **

The first really notewothy match was the Jr. Heavyweight Tag Championship, with Forever Hooligans defending against Time Splitters.  This was fast-paced and crisply worked, with both teams getting virtually all their spots in, including the Hooligans teased dissension followed by a hug-out (a hilarious bit they used to do).  Rocky Romero and Alex Kozlov were a great mix of athleticism and heel comedy, while Time Splitters were one of the great underdog babyface tandems.  After fourteen-plus minutes, Romero countered a corner double-team move by pushing Alex Shelley over the top rope to the floor and countering a Kushida powerbomb into a sunset flip, into a roll-up, retaining the straps.  Not the best finish ever, but the rest of the match was splendid.  ***1/2

The singles Jr. belt was up next, as division centerpiece Kota Ibushi defended against Low-Ki.  This match initially showcased multiple aspects of both men's games, beginning with a striking battle, evolving into a grappling contest, and finally morphing into an all-out Cruiser-style war.  The kicks and strikes on display were stiff as fresh lumber, a precursor of Ibushi's later heavyweight run.  The bout lasted a pretty thrilling 17 minutes, culminating in a lengthy struggle on the top rope to gain control.  Low-Ki eventually landed a Super Ki Krusher to win the match and the championship.  The crazy thing about rewatching this match is, as great as Ibushi looked in 2012, he's a significantly more well-rounded performer in 2018.  There may be no ceiling for this guy.  Damn good match, albeit one that would be overshadowed by the end of the night.  Prince Devitt returned to the company post-match to challenge for the title (and the three men would go on to have an insanely good match at WK7).  ***3/4 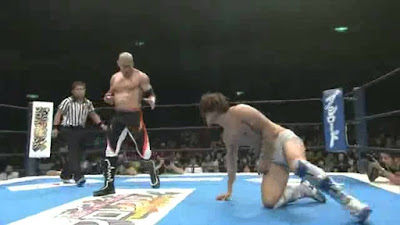 The heavyweight tag teams took over from there, as champions Tencozy defended against Killer Elite Squad.  Lance Archer and Davey Boy Smith Jr. played to perfection the heel bully role they'd already mastered, while Kojima and Tenzan were the unintimidated babyface veterans.  This was a stiff, rugged brawl with more or less non-stop action, and after roughly 13 minutes KES hit their double powerbomb on both guys to win their first IWGP Tag Team Championship.  KES don't get talked about nearly enough as a valuable heavyweight team.  Fine stuff here.  ***1/4

The one throwaway of the night was next, as a rising white-meat babyface named Tetsuya Naito faced his former No Limit tag team partner, the new heel Yujiro Takahashi.  This match didn't really get out of the gate, as moments in, Naito took a top rope armdrag and landed badly on his knee.  The story then became Takahashi taking advantage, as he spent the rest of the bout's five minutes working over the bad leg, getting a submission win.  Not much of a match, but after the bell Takahashi "Pillmanized" Naito with a chair.  This was all just a way to give Naito time off for a real knee injury.  *1/2

Another short match pitted Laughter 7 (Katusyori Shibata and Kazushi Sakuraba) against Togi Makabe and Wataru Inoue.  This was an intense fight right off the bat, with all four guys looking like they wanted to kill each other.  It was essentially the pro wrestlers vs. the MMA experts, with Laughter 7 making extensive use of their shoot skills, eventually getting the win with a choke/Penalty Kick combo on Inoue after only seven minutes.  This was engaging while it lasted and showed off Shibata as a legitimately brutal motherfucker.  **1/2

Now, taken by itself that's a pretty damn strong undercard.  But the last three matches on this show were what really launched it to the next level.

First was G1 winner Kazuchika Okada defending the Right to Challenge certificate against Karl Anderson, kicking off the tradition of the briefcase holder putting it up for grabs against someone who defeated him in the tournament.  These two packed a ton of great stuff into sixteen minutes.  Things started off with basic feeling out, but quickly spilled to the floor where Okada hit a draping DDT and took control.  Anderson mounted a comeback and returned the favor with a draping neckbreaker on the outside.  The second half of the match cut a blistering back-and-forth pace, building to a crazy finishing sequence where both guys teased their own finishers and each other's.  Finally Okada broke the see-saw with a Tombstone followed by a match-ending Rainmaker.  Helluva match.  ****


The semi-main event pitted reigning IWGP Intercontinental Champion Shinsuke Nakamura against frequent rival Hirooki Goto, and these two squeezed every second out of their allotted fifteen minutes.  Goto was the dominant bruiser early on, even besting Nak at grappling and submissions, but Nak used his guile to outmaneuver Goto, relying on his knee striking game and every other big move in his arsenal.  Late in the match Goto hit a second-rope Ushigoroshi followed soon after by a spinning faceplant for a near-fall.  But after a series of traded strikes Nak countered a headbutt attempt with a punch, hit a jumping knee, and leveled Goto with the Boma Ye to retain.  Excellent secondary main event.  ****1/4 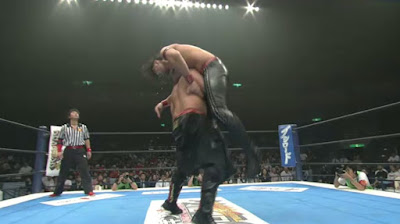 The main event of the show is one of those matches where I always forget how good it is.  IWGP Champion Hiroshi Tanahashi defended against Minoru Suzuki in a super-intense 29-minute war that included not one pin attempt until the finish.  It was all about working body parts to the breaking point.  The bout started off methodically with both men jockeying for position, until Suzuki grabbed an armbar in the ropes and proceeded from there to destroy Tana's left arm.  Suzuki bashed it on the security railing, the post, and then used multiple MMA arm holds to make the limb not work anymore.  Tana fought from behind with one arm until finally scoring a break with a dragon screw on Suzuki's right leg.  From there the match became a war of limb targeting.  Tana used multiple dragon screws and dropkicks to even the score, even hitting High Fly Flow on Suzuki's leg.  After a brutal striking war, Suzuki nearly ended the match with a choke, but failed to hit the Gotch Piledriver.  Tana escaped, went for another HFF but hit nothing but knees, and Suzuki went back to the insane palm strikes.  Tana hit a desperation Dragon Screw out of nowhere, followed by a pair of HFFs for the win.  This match was gritty, stiff as fuck, and its 29 minutes absolutely cruised by.  ****3/4


So by my count, of the nine matches, the final three were ****+ and three others were ***+.  That there is a goddamn excellent show, enough to win my vote for 2012 PPV of the Year.  New Japan was just getting started, and they kicked off their modern era with a stellar night of wrestling.  Incredibly they'd top themselves multiple times in 2013, including the second King of Pro-Wrestling PPV.

Best Match: Tanahashi vs. Suzuki
Worst Match: Naito vs. Takahashi
What I'd Change: Not much, this show is great.
Most Disappointing Match: The Naito match was short by necessity, but I guess that one.
Most Pleasant Surprise: Okada-Anderson was a way better match than I expected.
Overall Rating: 9/10

Posted by Justin Enuffa Ballard at 10:40 AM