Well this was a big deal, folks.  WrestleKingdom 11 was, as expected, a major hit for New Japan, proving unequivocally that they've recovered from the significant talent losses of 2016.  This was as good as PPV as we're likely to see all year. 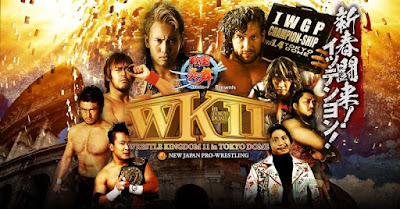 The big news coming out of WrestleKingdom 11 is that the 2017 Match of the Year has already been decided.  Hell, this may have been the match of the decade.  I almost don't know how to describe it.  I can't remember being this blown away by a wrestling match since the Triple H-Shawn Michaels-Chris Benoit main event at WrestleMania XX.  If anything tops Okada vs. Omega in 2017 (or anytime soon) I can't wait to see it.  This was nearly 47 minutes of just about everything you could ever want out of a main event.  The match started methodically with both men showcasing their grappling skills.  Act 1 lasted roughly 15 minutes and then the match surged to another level, with Act 2 consisting of some of the most insane high spots I've seen since the Attitude Era.  Omega landed a moonsault from the top rope, over the railing to the floor, he took a back body drop over the top rope through a table on the floor, Okada took a Dragon Superplex that looked like it killed him, and so on.  And this was only the second act of the match!  After this the drama actually escalated as both guys tried to put each other away, Omega kicked out of the Rainmaker (joining a very exclusive club) and tried in vain several times to hit the One-Winged Angel before finally falling to the fourth Rainmaker of the match.  Again, this went 47 minutes and didn't feel a moment too long for me.  I've never seen anything like this.  Dave Meltzer awarded this match an unprecedented six stars, and in no way do I consider that hyperbole.  Okada vs. Omega was one of the most incredible wrestling matches I've ever seen in my thirty-plus years as a fan. 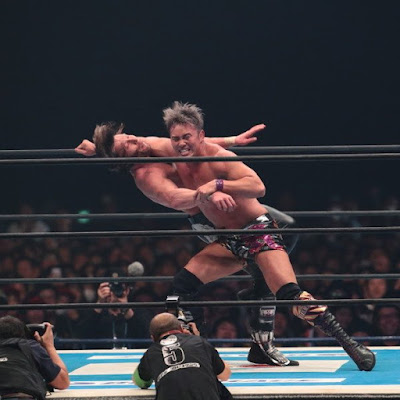 The main event was so good in fact that I feel like the rest of the card got unfairly overshadowed.  I had a hard time objectively rating the other nine matches after only one viewing, but I'll do my best....

The show opened with Tiger Mask W (aka Kota Ibushi) vs. Tiger the Dark (aka ACH) in a quick, lighthearted six-minute match.  Nowhere near what these two are capable of, but it wasn't supposed to be.  Ibushi needs to go back to being Ibushi ASAP.

The first standout was the Jr. Heavyweight Tag match, a vastly more memorable bout than the last three WrestleKingdom 4-ways.  Don't get me wrong, those are always fun, but it was great to see the Junior Tags get a simple two-on-two match that told a story.  But this still had the crazy high spots, like Trent Barreta doing a swan dive out of the ring and hitting nothing but floor.  Jeezus, how did he not die?  Rocky Romero then got double-teamed to death before making a surprise comeback and winning the belts.  This was great.

Next was the Gauntlet Match for the six-man belts, a three-segment melee that was fine, but kinda peaked early.  The Bullet Club trio faced the Chaos trio in a fun 7-minute match before moving on to the LIJ trio.  LIJ made short work of the BC and then faced the Champions, Kojima, David Finlay and Ricochet.  LIJ's cheating tactics won the day and the straps (only to lose them one night later to Tanahashi, Manabu Nakanishi and Ryusuke Taguchi).  This was fine, but forgettable.

Cody (Rhodes) made his big New Japan debut against Juice Robinson, in what was a fine showcase and more than I was expecting.  Juice got in a lot of offense (the reason became apparent at New Year's Dash when Juice pinned Goto to earn a NEVER Openweight Title shot), but Cody predictably won with the CrossRhodes.  Solid debut for Cody and I'm curious who his first feud will be against.

The ROH Title was on the line next as Kyle O'Reilly faced former Champ Adam Cole.  This was a bit underwhelming for me, but still a stronger match than Lethal vs. Elgin last year.  I said I still wasn't sold on Cole as an in-ring talent, and that's still true, but his heel antics were very well done, particularly when selling O'Reilly's choke hold interruption of his "Adam Cole baby!" chant.  The match was solid but too short to be all that memorable.  Cole unexpectedly won back the Title (As it turns out O'Reilly declined to renew his ROH contract - perhaps he's going full-on NJPW?). 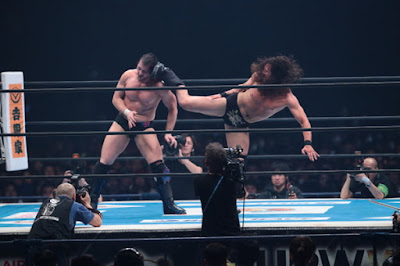 Instead of a Jr. Tag clusterfuck this year, we got a Heavyweight Tag one.  Guerrillas of Destiny defended against World Tag League winners Great Bash Heel, and Tomohiro Ishii/Toru Yano (who goaded his way into this match by stealing the tag belts).  This match was a fun brawl but Yano's comedy kept it from being much more than that.  As I suspected, Yano and Ishii won the belts, and post-match Ishii gave Yano his strap and walked to the back, several paces in front of his partner.  Ishii seemed like he had zero patience for the shenanigans, bringing to mind the old Steve Austin-Dude Love partnership.  One night later, the returning Killer Elite Squad made known their intentions to take back the belts. 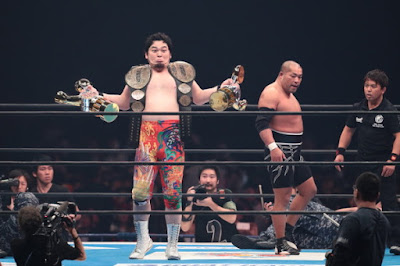 This was a solid, if less than stellar undercard, but WrestleKingdom will be remembered for its final four matches, the first of which pitted Jr. Heavyweight Champion Kushida against the newest LIJ member Hiromu Takahashi.  This sixteen-minute match was intricate and fast-paced, further showing off Kushida's remarkable abilities.  Late in the match Kushida locked in the Hoverboard Lock but Takahashi made it to the ropes and mounted a comeback, nailing his Time Bomb finisher for the win and the belt.  Not the best Kushida match I've ever seen but damn fine stuff.

Each of the final four matches was better than the last, and the crescendo continued with Katsuyori Shibata's fight against Hirooki Goto.  As predicted, these two beat the tar out of each other for a full sixteen minutes, starting out slow and building to a brutal peak.  Goto eventually won the belt with the GTR, and afterwards Shibata announced he was done with the NEVER division.  I'm very excited to see him challenge for one or both of the big belts in 2017. 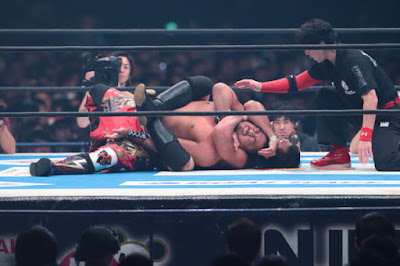 The penultimate match on the card, and the second-best, was Tetsuya Naito defending the Intercontinental Title against Hiroshi Tanahashi, in a classic case of the current hot star against the aging veteran.  This match was full of drama and psychology, with both men working their opponents' legs and trading finisher attempts late in the match.  Naito eventually won with two Destinos after blocking the High Fly Flow, solidifying himself as the Intercontinental Championship successor to Shinsuke Nakamura.  Michael Elgin later challenged Naito to an overdue rematch for the belt.

And that brings us back to the main event, which as I said, stood head and shoulders above the rest of the card, not to mention most other matches I've ever witnessed.  WK11 on the whole was a great show with no bad matches, several good-to-excellent ones, and an unforgettable, transcendent main event.  I'd rank it just below WK9 and 10 and just above 7 and 8.  It's likely the best PPV we'll see in 2017, headlined by almost certainly the best match we'll see all year.

Best Match: Okada vs. Omega
Worst Match: Tiger Mask W vs. Tiger the Dark, by default
What I'd Change: The ROH Title match could've gotten more time, but otherwise very little
Most Disappointing Match: O'Reilly vs. Cole
Most Pleasant Surprise: That after thirty years any match could be as all-encompassingly amazing as this main event
Overall Rating: 9.5/10
Posted by Justin Enuffa Ballard at 1:01 PM