Well damn.  Last night's Royal Rumble was about as good as can be expected in 2017.  Better than that even; I'd say the 30th edition was on par with the best Rumble PPVs they've ever done. 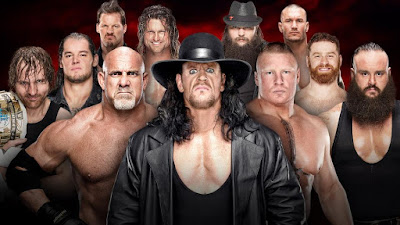 I've read a lot of negative feedback about the show, mostly due to the booking which was admittedly pretty unexciting.  No one new was positioned to be "made" with this match; it centered around the "safe" choices and we didn't get the expected Samoa Joe debut or a Kurt Angle return.  However we did get a very unpredictable Rumble with a larger field of potential winners than we've had in a very long time.  There were easily ten or so guys who could reasonably have walked away with the WrestleMania title shot, and that's nothing to sneeze at.  Aside from that, the Rumble match had a couple little surprises, like Tye Dillinger entering at #10 and Jack Gallagher making the most hilarious use of an umbrella I've ever seen.  Other highlights were Jericho as the long man once again (lasting just over an hour), Braun Strowman pulling a 1994 Diesel and killing a buncha guys before being eliminated, Goldberg besting Brock for the second time, and Roman Reigns eliminating The Undertaker and setting up their WrestleMania match (a prospect many are grumbling about but I'm actually fine with - it's something different and maybe we'll see Reigns go heel).  This Rumble match was not unlike the 2001 version in some ways - the surprise entrants were minor but the match had a good amount of star power and primarily served to reinforce the established names.  That's ok as long as a) the build to 'Mania unfolds logically and b) future Rumbles create some new stars.  I have few gripes about this Rumble match, except that the frequency of these two-time Rumble winners is gettin' to be a lot, and it's taking away from the specialness of that achievement.  But that's fairly minor.  Also in our Rumble pool I ended up with Roman Reigns and was ultimately the runner-up (Second time that's happened with Reigns, fourth time overall). 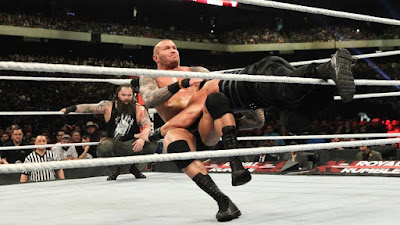 What really made this show stand out was the undercard.  I say without hesitation this was the finest Rumble undercard WWE has ever produced.  Two stellar Title matches and two solid title matches, with not one stinker on the entire PPV (I'm not counting the pre-show - Jax vs. Banks was a throwaway).  One can't really ask for more than that out of a Royal Rumble undercard, which generally trends toward uneven at best.

The Women's Title match opened the show and this was the absolute right move to get the San Antonio crowd invested.  Charlotte vs. Bayley felt like the first match in a series, and they got a respectable 13 minutes to tell a story.  Charlotte is such a major star right now in every facet of her game, it's really quite something to behold.  Bayley still hasn't quite recaptured her NXT magic on the main roster but it'll come.  This match didn't blow the doors off the place but it wasn't designed to - we'll doubtless see numerous superior rematches in the coming months.  For now this felt just about right for its place on the card, and the finish was novel if sudden - Charlotte nailed Natural Selection on the ring apron before rolling Bayley away from the ropes and scoring the pin.  Good opener. 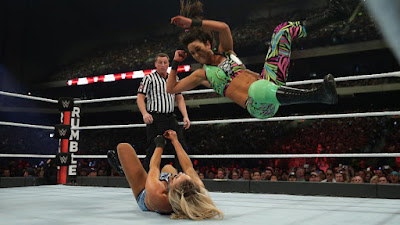 Next up was the first of two monster Title bouts, as Kevin Owens defended against Roman Reigns in a No DQ match with Chris Jericho in a shark cage above the ring.  Unlike their lackluster Roadblock match, this was an energetic, wild brawl that made great use of tables and chairs (though Jericho got less on-camera time for comedy than I was hoping for).  After multiple table powerbomb spots, Reigns seemed a lock to win the Universal Title when Braun Strowman appeared and decimated the unpopular Samoan, allowing Owens a cheap win.  Obviously Reigns vs. Strowman will happen at Fastlane, and hopefully there'll be some kind of explanation tonight as to why Strowman helped Owens.  I'd be okay if Strowman's new gimmick became Muscle for Hire.  This was a fun bells & whistles kinda match. 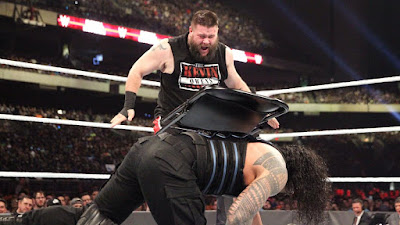 The weakest match of the night, by default, was the Rich Swann-Neville Cruiserweight Title match.  But there was nothing wrong here, other than the fact that the audience still doesn't care at all about these Cruisers.  The Alamodome crowd (who were pretty great all night) were just not into this, and I hope Neville being the new centerpiece of the division will get people interested.  Neville's doing great heel character work and wrestling a more grounded Cruiserweight style, so all they need now is a really charismatic babyface to feud him with.  Neville captured the Title in 14 minutes with The Rings of Saturn.  Let's get Gran Metalik in there to challenge him, ASAP.

The show stealer, as expected, was AJ Styles vs. John Cena for the WWE Title.  Goddamn this was great.  AJ and Cena delivered a strong showing at last year's Money in the Bank and an insane spotfest at Summerslam, and tonally this match fell somewhere in the middle.  There was more storytelling here than last August but the traded finishers and kickouts were still prevalent.  Cena finally avenged his two losses to tie Ric Flair's 16-time Championship record, but Styles was kept looking really strong in defeat, kicking out of multiple AAs and only falling to a double AA.  I hate that AJ is probably facing Shane at 'Mania, but if anyone can get a great match out of a non-wrestler it's Mr. Styles.  This ranks right up there with the best Rumble undercard matches in history. 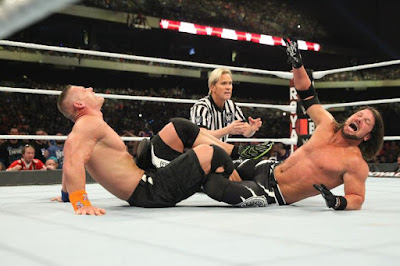 So I had almost no complaints about this show as a standalone PPV.  Every match was good or great, the crowd was hot, the Rumble was unpredictable.

Looking ahead I'd be lying if I said I loved the direction WrestleMania is taking; most of the prospective matches are fairly underwhelming and as usual there are WAY too many part-timers involved.  But I'm beginning to accept that for the foreseeable future WrestleMania is not going to be my favorite show of the year and there will be few matches that really appeal to my tastes.  And compared with the abysmal 'Mania builds of 2015 and 2016, this is hardly going to be the worst lineup they've ever assembled.  Hopefully there will be a logical reason for each bout and the booking will make sense, which is more than I can say for WrestleMania 32.

I guess I'm cautiously optimistic at the moment.  The strength of this Rumble PPV certainly helped.

Best Match: AJ Styles vs. John Cena
Worst Match: Rich Swann vs. Neville
What I'd Change: I'd have debuted Samoa Joe and had him murder a buncha guys in the Rumble
Most Disappointing Match: I wouldn't say anything was really disappointing
Most Pleasant Surprise: That the Rumble winner was under 40
Overall Rating: 9/10

Posted by Justin Enuffa Ballard at 10:54 AM