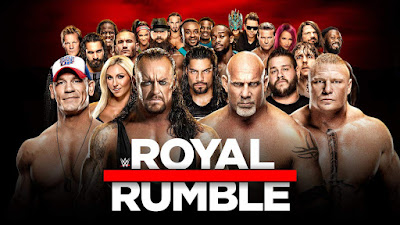 January is Royal Rumble time. My favorite PPV to watch, the Rumble has up to 30 (and sometimes 40) men that enter the squared circle to possibly win a chance to be the WWE Champion. But let’s be realistic. Of the 30 (or sometimes 40) there’s only a handful that actually have a shot to pull off the victory. I mean, as funny as it would be to have watched Drew Carey win (or at least I assume that’s what Vince thought), most of these guys have no chance. Here now are the dudes that might have a shot to be the last man standing at the end of the night.


JB: I'll my adding my two cents to each section, just to annoy everyone.

These are all the mid tier of the WWE at this point. They’ll all put in a good showing, they’ll all get the crowd going, and they’ll all do something bad ass in the match. But none of them have a chance to win this thing.


JB: I would add Sami Zayn to this group.  He'll have a solid showing and give us all some fighting spirit, but he'll fall short.

Kurt Angle ODDS 100-1
One of the greatest superstars ever. He could potentially end up being a surprise participant in the Rumble, but I put his odds at winning at ZERO.

AJ Styles ODDS 80-1
The man doing the best work week in, week out has to be put on this list. But I expect him to hold onto his Smackdown Title and move onto another feud for 'Mania.

Finn Balor ODDS 50-1
Due to come back from injury any time now, it’s not unprecedented to see a returning star win the Rumble in such fashion. However, I don’t see him pulling off the win here. Just doesn’t seem right from the storyline perspective.


JB: If Balor does indeed return on Sunday I'd put him in the group of Contenders, or at least the Possibles.  He'd be pulling a 2008 John Cena or a 2010 Edge.  And it would be awesome.  Also you gotta add Samoa Joe at probably 60-1 odds, as he's a very likely surprise addition.  He's all done with his NXT responsibilities and isn't even booked at Saturday's NXT TakeOver.  He'll be in this Rumble to kill a lotta people, but he won't win.  But it will set up a feud for him with someone, which is gonna be great.  #JoesGonnaKillYou

Roman Reigns ODDS 40-1
I cannot see Vince letting him win this thing to get booed outta the building AGAIN. Unless he allows him to go full heel…which isn’t gonna happen.

Seth Rollins ODDS 35-1
Rollins just "lost" his chance to be in the Rumble on Raw, but come on, since when do these stipulations matter in the good ol’ world of wrasslin’? Rollins could be standing high on the top rope at the end of the night, but I expect that mercifully, FINALLY, Triple H will return to TV and cost Seth the chance to win the Rumble. Then we’ll get the lead-up to their match at Mania.

Kevin Owens 30-1
This is dependent on whether or not he loses to Reigns…which I don’t see happening. But if he does and gets thrown into the Rumble, I expect him to be in the final four, but not to be the winner.

Chris Jericho ODDS 25-1
Yes, I’m a biased Jericholic. But hear me out. This is the one major match he’s never won. And he’s been doing his best heel work in years. Might he finally win this one to set up a match with his best friend at Mania? My God, it would be beautiful. I don’t know if management would give him the win, but story-wise, it makes a lotta sense.


JB: Of these four Jericho easily has the best chance.  Owens vs. Jericho is clearly happening at WrestleMania, but I think it'll be for the US Title, not the Universal.  Because Vince sucks.

Braun Strowman ODDS 20-1
Vince loves him some big doofuses. And this is a GIANT doofus. He’s gonna be a main event guy. It’s happening eventually. I just think it’s too soon for him. He’s beaten…Sami Zayn. That’s about it. He needs more time and to beat a better opponent at Mania…perhaps even…

The Undertaker ODDS 15-1
…Yes, The Dead man is in this match. But I don’t see him winning. I see him falling short and setting up a feud with the former Wyatt family member above. Which could be awesome.

Brock Lesnar ODDS 5-1
What better way to get Brock back over as the ultimate badass than destroying 29 other superstars en route to victory? It definingly could happen. Will it? I dunno…because there’s some 90-year-old bald guy that hasn’t wrestled a full schedule in years right in his way.

Goldberg ODDS 2-1
This motherfucker. I have no interest in Goldberg. Never really have. The one time I did like him, WWE blew it (You know, back at SummerSlam '03, when he ran roughshod over all his competitors in the Elimination Chamber only to lose to fucking Paul Levesque and his torn groin? Yeah, fucking genius.). But he’s gotta be looked as the favorite in this match. And it burns me. Much like the burning during urination that I would experience soon afterwards. Stupid gonorrhea. Anyway, he’s probably gonna win.


JB: As obvious as Goldberg seems, I honestly don't think Lesnar vs. Goldberg III is going to be for a Championship, because it doesn't need one.  It's a big match for the sake of a big match.  Sucks for the Title, and I dunno in what universe this is considered an appropriate WrestleMania main event - put it in the midcard as a Special Attraction where it belongs.  No, I think Lesnar and Goldie are gonna take each other out of this match to set up their Irresistable Force vs. Immovable Object bout at 'Mania, while the Title picture involves someone else.  For my money, as much as I hate to say it, I think Braun Strowman is the favorite to win this and challenge Roman at WM33.  And it's gonna stink.  I hope I'm wrong and that none of the four contenders listed here win it.  Our friend Scotty Pickles had the best idea ever, when he suggested that Sasha Banks be a surprise #30, slide into the ring and dropkick the last two guys out to win the whole thing.  I AM FULLY ON BOARD WITH THIS IDEA.

Thanks for reading!  We'll have full Rumble predictions on Friday!