Well we're finally getting the monumental first-time clash between WWE's former posterboy John Cena, and Vince McMahon's handpicked replacement (whom no one else likes in that spot) Roman Reigns.  Make no mistake, this match is a big deal.  So big in fact, that a main event of this magnitude could only happen.....AT NO MERCY!!!  Wait, what??  Seriously?  They're giving away the biggest current first-time match in this company at a B-PPV in September?  The fuck sense does that make?  Wouldn't you wanna save this for 'Mania 34, or at least Survivor Series? 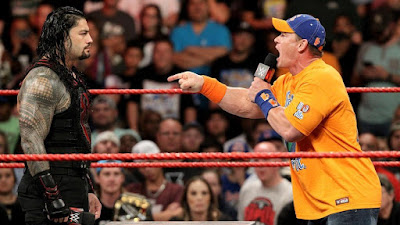 I legit don't understand this company anymore.  Between Cena-Reigns and Lesnar-Strowman, No Mercy is shaping up to be a stacked card.  But why are they putting so many eggs in this rather unimportant basket?  We haven't had a truly gigantic WrestleMania main event since the first Rock vs. Cena match.  I should think Cena vs. Reigns (and Brock vs. Braun) are the two best RAW main events for April 8th.  But I guess Vince reeeeeally wants Brock vs. Roman II to headline the big show in New Orleans.  Yawn.  Wouldn't want to excite us too much at the end of a seven-hour PPV, would ya?  The audience might actually react to the main event of the year's biggest show.  Can't have that.

All that aside, the Cena-Reigns promo last night was quite noteworthy for the most part.  Both guys took some nice digs at each other that veered into shoot territory, and Roman Reigns seemingly got to inject a little of his own personality into a promo for the first time.  Reigns called Cena out for being a part-timer who only shows up when WWE pays him enough (dayamn!), while Cena called out Reigns for being a corporate creation who still hasn't proved he belongs there ("It took you five years to cut a halfway decent promo").  Also, Reigns is clearly playing the heel in this feud.  Cena's position is 100% correct, while Reigns' is based on a skewed perception of things.  One of my favorite lines from Cena was "I do this part-time better than you can ever do it full-time."  Oh snap, Johnny!

What I didn't like about this promo though were the gratuitous references to backstage politics.  Granted, plenty of promos have drudged up that material before.  But where CM Punk's "pipe bomb" promo for example played within the context of "I'm the best wrestler in this company but I don't get the recognition I deserve, I don't get to be on the posters or mugs, etc.," Reigns talked about Cena "holding back younger talent" and "burying people," and Cena talked about using the US Title to "introduce new superstars" like Kevin Owens (accurate) and AJ Styles (Cena lost the US Title long before AJ showed up).  Within the confines of this fictional wrestling world, the idea of a main event guy holding back younger talent or giving new guys opportunities doesn't make sense.  The main event guy is the main event guy because he wins a lot of matches.  Calling attention to the company pushing someone based on anything else is counterproductive to the illusion that these wrestling matches are genuine competitions.  That would be like a supporting character on The Walking Dead calling out Rick because he doesn't get the screen time Rick does.  "You're only the main character on this show because the writers like you the best!"  It doesn't work.  Cena then pointed out that he hasn't main evented a WrestleMania in five years and that he opened the show at SummerSlam.  I mean, fair enough, but main eventing WrestleMania is supposed to be something that is earned based on winning matches, no?  WWE needs to knock it off with this fourth-wall shit.

In other news, Alexa Bliss won back the Women's Title already.  Sooo Sasha Banks has now held that belt four times, for a total of 82 days.  These unnecessary title changes on both shows are making me nuts.  What is this, the Russo era?  When did the number of title reigns become more important than the length?  I forget who said it years ago but some announcer was talking about Ric Flair (I think) being the NWA Champion six times and the line was "He's won it six times?  That means he's lost it five."  Winning a title a buncha times isn't nearly as impressive an accomplishment as holding onto it.  Cool it with the padded championship records, will ya?

Anyway, like I said, No Mercy is gonna be a big PPV.  They've already got a huge double main event and we still presumably have the Rollins/Ambrose vs. Cesaro/Sheamus rematch, the Balor-Wyatt rematch, and something for Samoa Joe to do.  I just don't like that they're rushing this Cena vs. Reigns thing.  Reminds me of 2008 when they needed a second main event for SummerSlam and they hotshotted Cena vs. Batista instead of saving it for WrestleMania 25, which so desperately could've used a better main event.  You can only do a big first-time match once.

Posted by Justin Enuffa Ballard at 10:54 AM