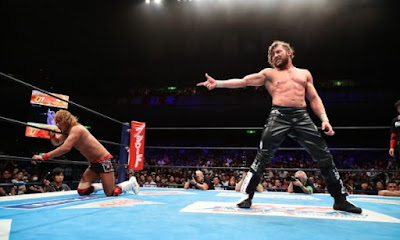 Well another G1 Climax is in the history books, and hot damn if that wasn't one helluva ride.  As expected the 2017 tournament yielded a sea of ****+ matches including probably half a dozen legitimate Match of the Year candidates, multiple story threads playing out, and a clear direction heading toward next year's WrestleKingdom 12 show.

G1 27 saw Yuji Nagata make his final appearance in the annual tourney, scoring only a single victory but delivering a host of memorable performances, one of which (his battle with Kota Ibushi) stole the show for me.  Nagata is a seemingly ageless warrior who at 49 can still tear the house down anytime he wants.

Meanwhile, G1 newcomers Zack Sabre Jr. and Juice Robinson made their mark in a big way, with numerous excellent showings and a surprise win or two for both guys.  Sabre made Intercontinental Champion Hiroshi Tanahashi tap out the first night of the tournament with an absolutely sick-looking submission, while Juice Robinson got shocking wins over both US Champ Kenny Omega and powerhouse Michael Elgin.  Both NJPW newbies undoubtedly earned title shots against their respective title-holding opponents this fall, and I eagerly await both matches.

Elsewhere in the tournament, Kota Ibushi made his long-awaited NJPW return sans Tiger mask, and padded his already amazing resume with spectacular showings against Tetsuya Naito, Hiroshi Tanahashi, and possibly my favorite match of his, the gritty, rugged bout with Zack Sabre.  Ibushi defeated the British technical master at his own game, eschewing his usual aerial assault for a battle of strikes and grapples.  I sincerely hope Ibushi sticks around this time, or if he must roam again, returns very soon.  Ibushi is a one-of-a-kind talent and the company is better for his presence.

Two of the company's bruisers had marvelous, show stealing matches against top names: Michael Elgin, and Evil.  Both B-Blockers, Elgin and Evil each faced Kazuchika Okada and Kenny Omega, and all four matches were incredible.  Elgin defeated Kenny on Night 8, while Evil got a shocking win over Okada on Night 14, undoubtedly setting him up for an IWGP Title match this fall.  Both men clearly elevated themselves with their work here.

All that aside though, the G1 centered around, and "climaxed" with, the New Japan "big four" - Hiroshi Tanahashi, Tetsuya Naito, Kenny Omega, and Kazuchika Okada.  Of the tournament's 19 shows, there were only four nights by my count where the best match didn't involve at least one of these four men.  And fittingly, the final three main events were transcendent.  On Night 17 Tanahashi and Naito renewed their rivalry from earlier this year with an epic, dramatic bout that for me was their best outing yet.  Naito won the rubber match to advance to the Finals.  Paralleling that, on Night 18 we got the the third match in the Okada-Omega series, and while only half the length of their Tokyo Dome classic (the SHORTER of the first two), this match was impossibly action-packed, showcasing balls-to-the-wall wrestling that never let up for the bout's 24-minute running time.  You're not ever gonna see a better match of that length in 2017, or for a long time thereafter.  I think this was my second-favorite of the series, after the WK11 match.
As for the Omega-Naito Final.....sweet jumpin' shitballs, this was something else.  Last year Omega and Naito delivered what was unanimously considered the best match of G1 26, if not 2016.  One year later TO THE DAY, they did it AGAIN.  This topped their 2016 bout, matching the intricate, furious action of that match but adding numerous "Holy fuckin' shit" moments that recalled Okada-Omega I.  This match saw: Naito piledrive Omega onto a table, missing the table and landing on the floor; Omega counter a superplex attempt by falling and driving Naito face-first into the top of the ring post; Naito reverse a top-rope powerbomb into a hurricanrana while in midair; Naito resurrect, and miss, his old finisher the Stardust Press; and too many brain-shattering dragon suplexes, German suplexes, and neckbreakers to count.  There were so many times during this match I said to myself "How is he not dead from that??"  After 34-plus minutes and numerous Destinos, Tetsuya Naito eked out a win to become the 27th G1 winner, as expected.

I'd be lying if I said Okada-Naito were the most exciting WK12 main event I can imagine, but this story has been about four years in the making.  In 2014 this match was set to be the WK8 main event but was voted into the semi-main event slot by the fans, in favor of Tanahashi vs. Nakamura.  18 months later Naito revolted against the lack of audience respect thrown his way and one of the great heel/anti-hero characters of the 21st century was born.  Naito got a brief run with the IWGP Title in 2016 but that was obviously not going to satisfy the LIJ leader.  So here we are now.  He'll obviously be kept busy this fall with the two men who beat him in the G1, Tomohiro Ishii and Bad Luck Fale (Christ, why is Fale ALWAYS booked as a briefcase challenger??), and then we'll finally see Okada vs. Naito headline Tokyo Dome.  The match will almost certainly deliver even if my enthusiasm for it isn't what it could be.  Meanwhile Kenny Omega will have his hands full defending the US Title (likely against Michael Elgin and Juice Robinson), and hopefully his WK12 opponent will be none other than Kota Ibushi in the semi-main event slot.  Omega is also due a third IWGP Title opportunity at some point, after finally defeating Okada, but who knows when that'll be.

The upshot is, once again the G1 Climax delivered the best wrestling of the summer months, continuing to add to the prestige of this legendary tournament.  If you haven't checked out at least the highlights, go to NJPWWorld.com and check it out.  This is wrestling.


Before I go, here were my ten favorite matches of the tourney, in chronological order:


1. Kota Ibushi vs. Zack Sabre Jr. (Night 3) - I loved this technical little war, as Ibushi took every pretzel-knot hold Sabre could think of and still beat the grappler at his own game.

2. Kazuchika Okada vs. Michael Elgin (Night 4) - This was for me the first ***** match of the tourney; Elgin proved here he belongs in there with the top dogs.  Hopefully a real run with some gold is in his near future.

4. Kenny Omega vs. Michael Elgin (Night 8) - Elgin once again demonstrated his worth against an NJPW top draw, outlasting the show-stopping US Champ in a thrilling 24-minute main event.

5. Kenny Omega vs. Evil (Night 12) - Omega and Evil had one of the wildest battles in the entire tournament, incorporating table spots and loads of rulebreaking.

6. Kazuchika Okada vs. Evil (Night 14) - Okada went 6-0 in the tournament (the only man to do so) before running into a lawless brick wall by the name of Evil.  This was a career performance for the Number Two man in LIJ, one that's sure to catapult him to a PPV main event.

7. Kazuchika Okada vs. Minoru Suzuki (Night 16) - Okada's luck and stamina seemingly ran out after his first six matches, and Exhibit B is this grueling 30-minute draw with the grizzled sadist that eventually devolved into a war of attrition.  This was even better than their New Beginning match in February.

8. Hiroshi Tanahashi vs. Tetsuya Naito (Night 17) - As mentioned earlier, this was in my estimation their best match together.  Fantastic, grand, main event storytelling.

9. Kazuchika Okada vs. Kenny Omega (Night 18) - The modern-day Flair-Steamboat feud got its third chapter in a match I didn't think could be topped in this tournament.  This was a masterpiece in a series of masterpieces.

10. Kenny Omega vs. Tetsuya Naito (Finals) - ....And then this happened.  And it blew away everything else in this tournament.  This match was impossibly great, and probably my second-favorite match of 2017 thus far.


Well that's my take on G1 27 - hope you all loved it as much as I did.  Right now there's no wrestling company on this planet that can touch New Japan Pro Wrestling, and they proved it yet again with four weeks of incredible stuff.  Thanks for reading - comment below with your thoughts!