Red Sox 1st Pitch To The Nards: An Oral History

Last night, one of the greatest events mine eyes have ever seen occurred. Before the Boston Red Sox took on the St. Louis Cardinals at Fenway Park, they were honoring a young man named Jordan Leandre.  Jordan had cancer and was known around these parts for running around the bases when he was a little kid. It’s Jimmy Fund week where the Sox do their annual telethon to eliminate cancer so there he was on the mound to deliver the first pitch. And what a first pitch it was. View the glory below.

I am not lying to you, loyal reader, when I tell you this is legit the funniest thing I have ever seen in my life. I have watched this maybe 4 million times already and it keeps getting funnier every single time I see it. Watching a grown man getting hit in his beef popsicle on an endless loop has cheered me up immensely.

The amount of things that had to go wrong with this pitch that it ended up hitting this chubby cameraman in his spunk bunker is off the charts. First, the kid gets on the mound and he had to be nervous. Then, he had to shoot off a pitch that he must've known was going haywire the second it left his hand. And the big dude taking the pics had to settle in and be a pro long enough that his meat scepter was in total danger. In fact, Tony Capobianco IS a total pro and kept shooting pics!


I fear I have no way to stop watching this. I do not see how any other video on the interwebs can possibly bring me more joy than a stitched horsehide baseball hitting a man square in the nuts. So tonight I will continue to watch this video and I will pray for Tony Capobianco's clam hammer. 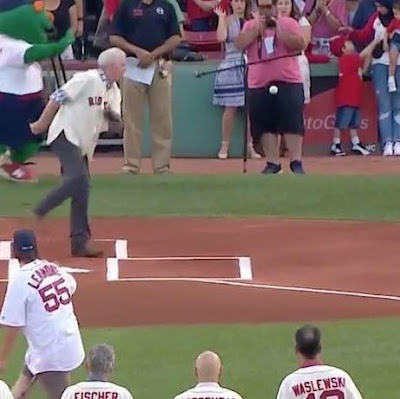