Game Of Thrones Season 7, Episode 4: The Spoils Of War

FIIIIIIIIIIIRE!!!! There’s nothing like a nice, pleasant Sunday ending with a goddamn dragon torching a Lannister army. It’s a beautiful sight. 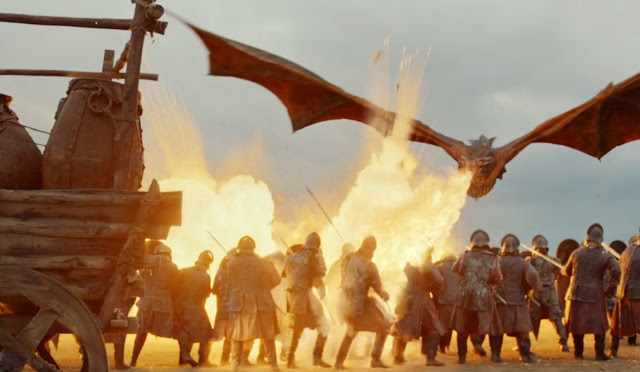 I hope you like your foot soldiers well done.

I'm getting ahead of myself here, though. That was the end of the episode & the real meat of this week's installment. I'm reversing course here, so let's start with...

---Arya finally made it back to Winterfell and had a lovely reunion scene with her sister, Sansa. You could tell these two really missed each other as they talked for the first time in years in the catacombs of their childhood home next to the statue of their departed father. And then she met up with Bran. That kid is a fucking DRAG, man. I know he's gonna have a bigger part to play as the show wraps up, but Christ he sucks right now (same with Littlefinger. That manipulative fuck is up to something, but I cannot pinpoint it all).

---We also got to see how awesome Arya is with her sword skills as she sparred with Brienne. A fun scene that really shows that a girl is not to be messed with. 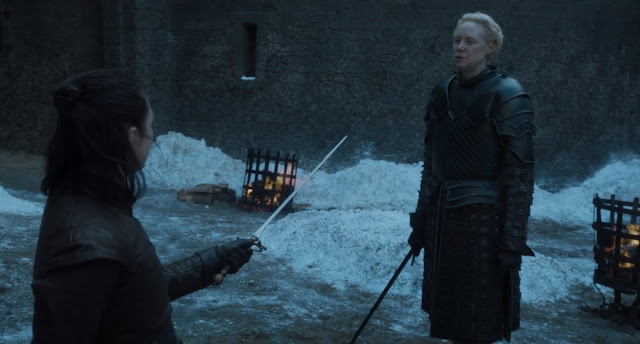 My money was on Brienne. I'M RUINED!!!

---At Dragonstone, Jon shows Dany all the dragonglass in the caves under her castle. And it's an epic looking scene filled with a dramatic new piece of music. Jon discovered in the cave that the Children of the Forest left some paintings behind that showed they eventually teamed up with men to fight the common enemy, the White Walkers. This convinces Ms. Stormborn that she should help Jon battle the undead...but only if he bends the knee. These two are letting pride get in their way. I thought Dany was smarter than Jon, who, we realize, knows nothing, but she's just being petty at this point.

So about that dragon battle. AWESOME. Jaime and his hetero life mate Bronn are just hanging around, heading back to King's Landing when Bronn hears some folk a-creeping and BOOM Dothraki army backed up by a motherfucking dragon. It was an awesome spectacle to watch on the tube. 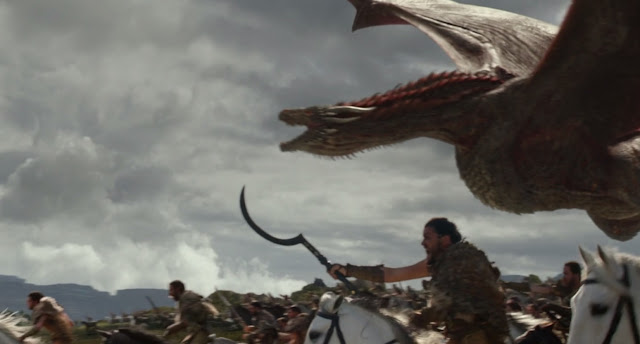 The battle was awesome to watch, but there were defintley some pros & cons.

PRO: The CGI dragon torching a buncha poor saps looked awesome. The guys getting cooked so fast they instantly became ash was cool as shit.

CON: I don't care about courage or a soldier's oath, I see a prehistoric murder machine spewing lava breath, I turn tail and get the hell outta there. The fact that none of the Lannister army ran for the hills seemed unlikely.

PRO: The scenes were shot well. None of that confusing editing where you have no idea what's going on.

CON: Ok, so Bronn shoots Drogon with his giant crossbow, who gets mighty pissed off and shoots flames at the crossbow. Bronn...ducks outta the way? And lives? COME ON WITH THIS SHIT. The size of that dragon fire blast woulda toasted him up faster than a marshmallow on a campfire. 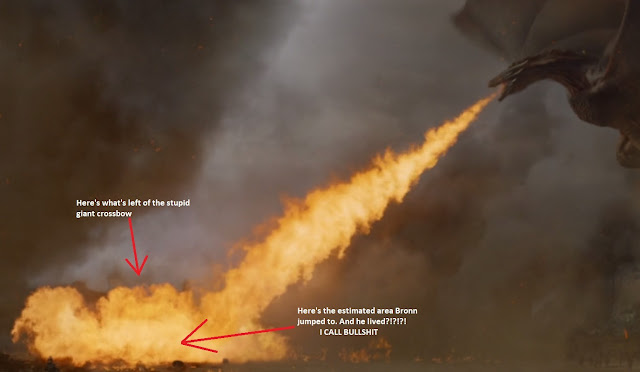 CON: And along with that...Jaime sees Dany on the ground so he heads over there to try and kill her. Drogon does what Drogon does and spits hot fire all over him...and he's knocked off his horse by Bronn and into a conveniently placed lake? COME ON WITH THIS SHIT PART 2! Disregarding the fact that the little lake is like 100 feet deep, they both woulda been burned up faster than Michael Jackson's hair. I get not wanting to kill both these dudes like that, but I like some form of reality in my shows with fire breathing dragons & where people come back from the dead.

Those distractions aside, this was one of the best battle scenes GoT has put to film. It was a great way to end the episode. Even though it looks like Jaime was floating down into a watery grave to meet Jack Dawson, you know he ain't going out like that. Might this lead to a reunion with Tyrion? I assume he gets captured after being brought out of the lake with no bottom. Should make for some interesting (non dragon) fireworks for next week's show.