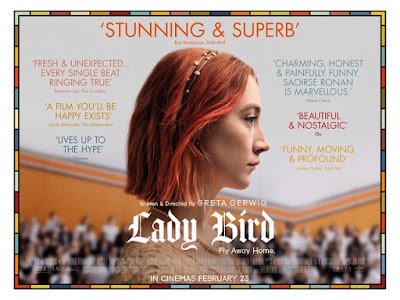 Lady Bird features one of the most authentic portrayals of a high schooler I've ever seen.  Saoirse Ronan's star-making turn as the title character envelops her completely, and she finds the exact balance of teen angst (both the romantic and career sort), social frontrunning (Lady Bird at one point seems to forsake her best friend for the popular girl in school), and deliberate quirkiness (who names themselves "Lady Bird?") without overplaying any of it.  This character is socially clumsy and unclear how much of the real world works, but like all teenagers thinks she has it all figured out.  Ronan isn't afraid to get her hands dirty, even becoming deeply unlikable at some moments.  In the end though, she's just a raging teenager trying to create opportunities in life by escaping the stagnancy of suburban Sacramento.

The other primary performance, just as integral to the film, is Laurie Metcalf (of Roseanne fame) as Lady Bird's judgmental, passive-aggressive mother Marion, who professes her deep motherly love one moment and denigrates her daughter's apparent lack of realistic ambition and intelligence the next.  Their tumultuous relationship is so genuine I felt like I was watching real-life family squabbling.  Metcalf has a few understated, show stealing moments that fully justify her first-time Oscar nomination (I love that this wonderfully talented actress is finally getting some real recognition - for more evidence of her abilities, watch the Roseanne episode "Crime and Punishment").

A senior in high school, Lady Bird fancies herself a future math major, but sadly isn't very good at math.  She tries her hand at drama club but fails to impress the director of the school play.  She goes through two love interests during the year, neither of which proves to be very compatible with her, for very different reasons.  Her newly unemployed father (a victim of the 2002 recession) agrees to secretly help her apply for financial aid so she can apply at some east coast colleges, while her mother resents her for even considering moving away.  The film plays out as a series of episodes throughout one school year, with the realism of a documentary.

One thing I was struck by was the film's refusal to pay off side characters in the expected fashion.  The school's popular girl Jenna is a bit of a bad influence on Lady Bird but also seems to genuinely like her, until their friendship is damaged by Lady Bird's dishonesty.  In a lesser film this would've led to Jenna publicly shaming Lady Bird at school, but here their bond just quietly fades.  Lady Bird's brother and his live-in girlfriend are another example - at the outset it seems like the two of them will be set up as antagonistic characters, but as it turns out both Miguel and Shelly are deceptively caring people.  There's a touching moment where the even-tempered Shelly takes Lady Bird aside to point out how good Marion has been to her.  I actually would've liked to spend more time with Lady Bird's siblings, but then the film's not really about them.  This story is about Lady Bird and how her life and perspective are shaped by her relationships with others.

Lady Bird reminded me of 2007's Juno in some ways, but it felt more grounded in reality than that film; I always thought the dialogue in Juno seemed calculatingly literary in a way that didn't quite ring true.  Here everything feels totally real, to the point that I'd love to revisit this character in four or five years and see how everything turned out for her.  Greta Gerwig's directorial debut is quite something.

Thanks for reading - join us on Facebook and Google+