The WrestleMania 34 card is taking shape, and there are two major bits of news coming out of Elimination Chamber.  Both of these items played out as expected, and people seem to be complaining about them as though they're surprised.  I'm excited for one, indifferent toward the other. 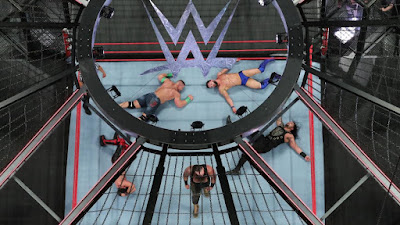 The first big news is that Ronda Rousey will indeed be competing at WrestleMania, and all signs point to a mixed tag match against Triple H and Stephanie, likely with Kurt Angle as Ronda's tag partner.  I'm fine with all of this - it's a payoff that was teased three years ago, and Angle makes perfect sense to team with Ronda.  Both have a legitimate combat sports background, both were highly touted as major acquisitions for WWE, and with Angle blowing the whistle on the Helmsleys' subterfuge during the contract signing, it seems appropriate for him to volunteer.  This won't be a five-star classic, but it'll be a high profile way to introduce Ronda as a full-fledged WWE wrestler, it keeps Hunter out of one of the long matches of the night, and it's a big box office attraction-type match.  Yes, the Boss vs. Wrestler feud has been done to death, but the fact that it's the female version of that angle gives it a different flavor, and after this blows over Ronda can be incorporated fully into the women's division.  This'll be fine. 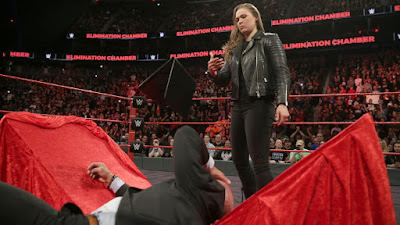 The other news is that Roman Reigns is once again headlining WrestleMania.  Sigh.  There's nothing surprising about this, and Brock vs. Roman will likely be a better overall match than Brock vs. Braun would've been.  But with the way Braun was booked in this Chamber match it really should be him in the main event, having an all-out car collision of a match with Brock.  Now I'm not sure how they resolve the unfinished business with Strowman, unless Brock re-signs, nor do I have any idea what Strowman's 'Mania plans are.  It is strange that both big 'Mania matches set up last night are payoffs from three years ago.  At least the long-term storytelling is in place there.

The show itself was solid stuff.  The non-Chamber matches were nothing spectacular, but none of them were really bad either.

As expected one of the Chambers opened the show, in this case the women's bout.  I liked this match quite a bit.  It won't be remembered as an all-time great Chamber match, but the women brought their working boots and put together a highly entertaining match, with Bayley getting the most in-ring time.  Bayley was booked strong, fending off both Mandy Rose and Sonya Deville until Sasha entered the fray to help out.  With Mickie James added, they made short work of the Absolution ladies, then Bayley took out James with a Bayley-to-belly, leaving Alexa all alone against the two friends (Alexa sold her fear beautifully).  Unfortunately for Bayley, Sasha jumped the gun in turning on her (This could've been handled more dramatically I thought - it came off as just business rather than a betrayal), and Alexa was able to divide and conquer, retaining the title after 29:35.  Alexa's post-match promo was great, as she teased breaking character and getting emotional about the historical significance of the match, only to turn on the crowd and her fellow women's wrestlers.  This was a lot of fun and will, it seems, set up Sasha vs. Bayley on the undercard at 'Mania.  Who Alexa faces remains to be seen, as Asuka still hasn't decided who she's chasing. 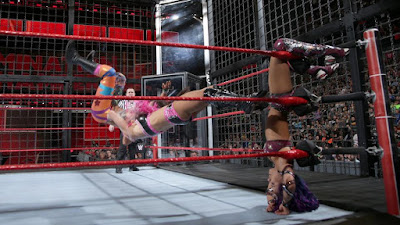 Next up was the Tag Title match, as The Bar and Titus Worldwide had a decent, if forgettable TV-quality match.  The Bar retained relatively easily in a ten-minute affair.  This division needs some new credible challengers pronto.

Asuka defended her 'Mania spot against Nia Jax, in a short but well-constructed story match.  Nia played the unstoppable monster, while Asuka had to hit and run, playing much more of an underdog than in their NXT match from two years ago.  The announcers sold this like Asuka had no chance (which of course meant she was winning), but Asuka countered a powerbomb attempt into a rollup for the win, after which Nia attacked Asuka, putting her through the ring barricade.  This match kept Asuka's streak and momentum alive but also protected Nia quite well.  Whichever title Asuka goes for, Nia should be the other brand's challenger.  I actually wouldn't mind Nia going to Smackdown and facing Charlotte.  Jax still needs a little more grit to her character (her speaking voice is still too clean-sounding), but she's really finding her stride as an in-ring destroyer and in a year or two she should really be something. 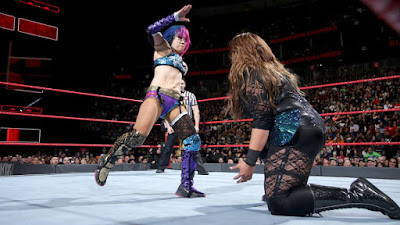 The one real throwaway match of the night was Bray Wyatt vs. Matt Hardy, but Hardy's gimmickry is so bizarre that it kept the bout from really dragging.  Action-wise there wasn't much to look at, and Wyatt's heat is as dead as can be.  Hardy needs someone with some actual momentum to feud with.  This was what it was.

The Rousey segment worked for the most part.  My issue with Ronda is that she seems really uncomfortable talking, and her stage presence isn't there yet.  After tossing Hunter through a table she stood there looking intimidating, but she hasn't found the intangibles to really sell it.  I think she'll get there with time, but until then her non-wrestling segments should be kept to a minimum.

The main event was the de facto match of the night.  Hardly a MOTY candidate but a worthy Chamber headliner that was well-booked, got over Braun as an absolute killing machine, made Balor and Rollins look like gutty survivors, and of course gave Roman the big win to get him to 'Mania.  I was glad that Elias and The Miz were the first two eliminated, as realistically they would be.  I was glad Strowman ran the table up until the end, as this protects him like crazy and he can continue to be a major player throughout the year.  I was glad Balor came off as someone who belonged in there with the big dogs.  As I said, I'm indifferent to the Lesnar-Reigns rematch.  They're beating a dead horse with the Roman push and this seemed like the time to take a chance and give Strowman the ball; the fans wanted it and with the story being told it would've made the most sense.  But aside from that I can't complain about this match. 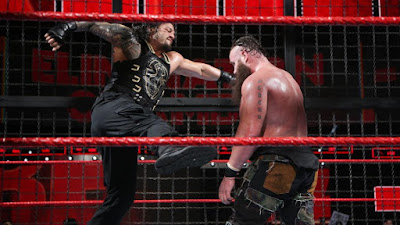 So that's the show.  I give it a mild thumbs up.  It was nowhere near as good as the Rumble, but it wasn't bad by any means.  The booking was logical (even if the ending wasn't satisfying to me), the right people were protected in losing, and 'Mania 34 is shaping up to be a helluva show, all things considered.  It's WWE's to screw up (and they still may, but I'm optimistic as of now).


Best Match: Men's Chamber
Worst Match: Bray Wyatt vs. Matt Hardy
What I'd Change: Give Strowman the big match with Brock, have Reigns-Rollins as a semi-main event.
Most Disappointing Match: Nothing really
Most Pleasant Surprise: That Cena was eliminated before Balor
Overall Rating: 7.5/10

Thanks for reading - join us on Facebook and Google+

Posted by Justin Enuffa Ballard at 11:02 AM