SummerSlam 2017 felt a bit like one of those older WWF PPVs that had a ton of variety and was oddly more enjoyable than it probably deserved to be.  The ten main PPV matches cruised by at a decent pace and this show never felt to me like a slog, a la SummerSlam 2016.  There wasn't anything truly great on the show, but there were several very good matches, most of which occurred in the second half.  In that way this was like the anti-WrestleMania; the previous two 'Manias started out strong and become a major drag by the final hour.

Of note, the crowd for NXT TakeOver the night before was electric from start to finish.  The SummerSlam crowd was mostly pretty dead except during a few select matches.  I've asked this before, but isn't Vince bothered by this phenomenon?  You'd think he'd figure out a way to make the main roster crowds' enthusiasm match that of the NXT audience.

Things kicked off in very strange fashion, with the John Cena-Baron Corbin match.  I'm not sure who thought this would make for a hot opener, but it wasn't; Corbin's nondescript offense and Cena's seeming lack of motivation of late failed to jumpstart the Brooklyn crowd.  There was a nice callback near the end of the match, where Cena tossed Corbin to the buckles, Corbin slid out of the ring, and immediately slid back in.  Earlier in the bout this spot resulted in Corbin leveling Cena with a clothesline, but Cena turned the tables the second time, hitting a clothesline of his own, followed by the AA for the win.  Not much of a match, but I got some enjoyment out of it because my son watched it with me and he's a big Cena fan.

Next up was a much stronger match, pitting Smackdown Womens' Champ Naomi vs. Natalya.  These two strung together some nice, innovative offense, the wrestling was fairly crisp, and Nattie finally got a well-deserved Title win with the Sharpshooter.  Perfectly serviceable undercard match with the right winner.

The worst match of the night was third, as Big Cass and Big Show sleepwalked through a fairly excruciating ten minutes.  I'm not sure why this needed to be on the main card while the Smackdown Tag Title match wasn't, nor were The Miz or The Hardyz, and Sami Zayn and Dolph Ziggler were absent from this show completely.  The only memorable bit was Enzo squeezing out of the shark cage, which immediately led to him getting murdered by Cass.  Pointless, particularly since less than a year later both Enzo and Cass were gone.

Speaking of pointless, Randy Orton beat Rusev with an RKO in ten seconds.  Poor Rusev.  Not that I was excited about this match anyway, but Jeezus this was a waste.

Things picked up again with the RAW Women's Title match, as Alexa Bliss and Sasha Banks delivered a well-worked 13-minute bout on par with Naomi-Nattie.  This wasn't on the level of Sasha and Charlotte's matches, and certainly nowhere near as good as the show stealing Asuka-Ember Moon match from the night before, but Alexa played the douchebag heel to perfection and these two had undeniable chemistry.  Sasha won the belt for the fourth time via Bank Statement tapout. 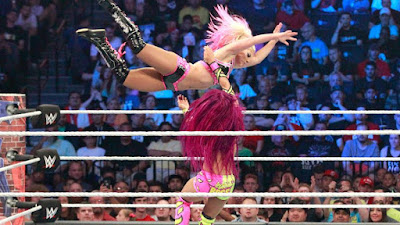 Finn Balor vs. Bray Wyatt was a solid outing, with Balor no-selling Wyatt's theatrics.  The action was just pretty good, but it was interesting to see Balor throw everything back in Wyatt's face, so to speak.  Balor was one step ahead most of the bout and finished it with the Coup de Grace for the decisive win.  This unexpectedly ended the feud, as the blowoff match scheduled for No Mercy that fall was derailed by a Wyatt stomach bug.
The first unequivocal hit of the night, and the first match that really woke the crowd up, was the RAW Tag Title match.  This was splendid stuff.  Seth Rollins and Dean Ambrose rekindled their team chemistry, playing the beleagured face team beautifully.  Cesaro and Sheamus dominated much of the match, perfectly realistic considering they've been teaming for months.  The finish came when Rollins thwarted a big tandem move by the heels, hit Sheamus with the V-Trigger, and then Ambrose nailed Dirty Deeds to win the belts.  Easily the best thing on the show to this point and it would lead to a brief Shield reunion.


Slightly better than that was the US Title match, with AJ Styles and Kevin Owens finally delivering a match worthy of their talent.  Sadly there was a bit much of the special referee shenanigans, with Shane getting knocked down multiple times and missing pin attempts from both guys.  But the action was strong enough to rate this match an easy hit in spite of all that.  AJ retained the Title after hitting the Phenomenal Forearm followed by a Styles Clash.  This of course led to a neverending Owens vs. Shane feud that lasted until WrestleMania.  Still this was in the running for Match of the Night.  Solid **** match. 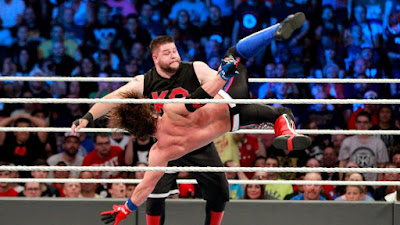 I liked that this card didn't have a "death spot."  The two top-billed matches went on at the end.  The WWE Title match was treated as a big deal and had kind of a big fight feel at the beginning.  The match itself was a passable free television match for the most part; Shinsuke Nakamura got out of Jinder Mahal what he could, and then the finish happened.  The same stupid fucking finish as every Jinder match during his ill-conceived WWE Title run.  The Singh Brothers interfere, the babyface beats them up, and then Jinder magically recovers from getting his ass kicked to hit his Khallas for the pin.  Except this time Jinder screwed up the move.  Legit, Jinder Mahal has ONE MOVE in his repertoire.  One move.  And he fucked it up.  It is still embarrassing that this man got to be the WWE Champion.  This was a **1/2 match dragged down to *1/2 by a stupid finish.


Fortunately the main event saved the day, as Brock Lesnar, Samoa Joe, Roman Reigns, and Braun Strowman unleashed absolute bedlam on the Barclays Center.  Man this match was insane.  Strowman in particular looked like a star, tossing Lesnar around like a bag of laundry, powerslamming him through two tables, and flipping a table on top of him.  The first ten minutes or so were awesome, then after Lesnar was carted away the energy hit a bit of a lull till Brock inevitably came back to the ring.  The final stretch was full of great false finishes before Roman took the pin off an F5 at the end.  It looked like perhaps WWE was moving away from their stubborn "Roman is The Guy" stance, but by WrestleMania season we were of course back to Brock vs. Roman again.  Yawn.  Still this main event was awesome. 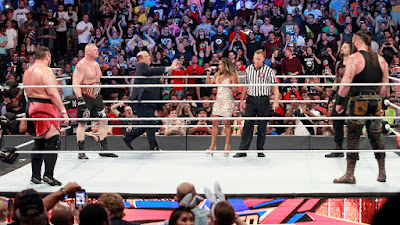 Overall this was roughly on par with the last few SummerSlams, but in a different way.  The 2014 and 2015 shows were very strong all the way through, while 2016's show was very uneven but the good stuff shined.  This show was somewhere in between.  Most of the big matches delivered, and most of the undercard was fine.  My two biggest gripes were the dull as dogshit Show-Cass match and the intelligence-insulting Jinder-Nakamura match.

Best Match: Brock vs. Brawn vs. Roman vs. Joe
Worst Match: Big Show vs. Cass
What I'd Change: Nak should've won the belt, or at least not fallen for the same stupid shit as Orton; Show-Cass should've been on the pre-show, New Day-Usos should've been on the main show, and Sami Zayn vs. Dolph Ziggler should've been added
Most Disappointing Match: Jinder vs. Nakamura I guess
Most Pleasant Surprise: That Shane's involvement didn't derail the US Title match
Overall Rating: 7.5/10
Better than WrestleMania 33? - It's a tough call.  'Mania had a much better first half, SummerSlam had a better second half.  I guess 'Mania wins by the slightest of margins.