SummerSlam 2019, while certainly no instant classic PPV, was nonetheless a thoroughly easy show to watch, managing to stay well under four hours and providing a variety of solid undercard matches and a pretty great main event. 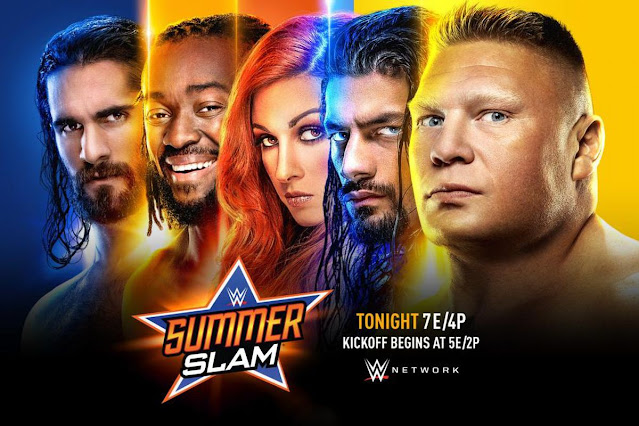 The show kicked off with the Becky Lynch-Natalya submission match.  This was the exact right type of match for the stipulation, with both women working over the body part their respective finishers target.  Becky went after Nattie's arm to soften her up for Disarm-Her, and Nattie attacked Becky's historically weakened knee.  Each of them stole the other's finisher at one point, teasing the humiliation of having to tap out to their own move.  The most memorable spot was Nattie locking in a Sharpshooter in the turnbuckles, leaving Becky dangling out of the ring as she struggled to break free.  Becky nearly submitted to a second Sharpshooter mid-ring, but managed to reverse it into the Disarm-Her for the win at about 12:30.  This was a fine opening match and easily one of Becky's best that year after her goodwill had been squandered for months in a feud with Lacey Evans. 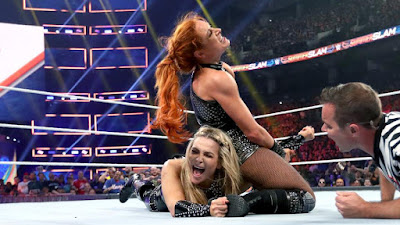 Next up was one of two matches I was dreading, as Dolph Ziggler got killed dead by Goldberg in under a minute.  But for what this was it was executed damn near perfectly.  Ziggler and Goldberg stared each other down for a moment, and suddenly Ziggler leveled him with a superkick, covered him, Goldberg kicked out at one, and the sequence was repeated.  Ziggler charged, Goldberg cut him off with a sick-looking spear, followed by the jackhammer for the win.  Ziggler got on the mic and trash talked him, Goldberg returned to the ring and speared him again.  Ziggler did it again and Goldberg hit him with a third spear before finally leaving.  Now, feeding Ziggler, irreparably damaged though he is, to a 50-year-old who hasn't had a real match since 2003, is idiotically counterproductive.  But the live crowd went apeshit for this, the tease of Ziggler winning an upset was great, and Ziggler made the spear look like a spine-shattering move.  That said, I still don't get why everyone likes seeing Goldberg's one-note schtick over and over, or how this is supposed to translate to good long-term business.  But for what it was, they nailed it. 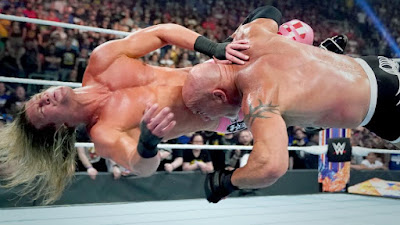 The letdown of the night was next, as AJ Styles and Ricochet had a good match.  But Styles and Ricochet should be having effortlessly great matches every time out.  First off, placing this immediately after Goldberg was stupid; the crowd wasn't going to be hot for anything after that.  Second, why are AJ and Ric having a methodical match where AJ goes after a body part?  This should've been a high-energy spotfest, not something that reminded me of Chris Benoit-Rob Van Dam from SummerSlam 2002.  Ric got a few cool moments, at one point using Anderson and Gallows as stepping stones on the way to a hurricanrana on the outside.  And the finish was spectacular (recycled from AJ-Low-Ki in TNA and AJ-Ibushi in NJPW) - Ric went for a top rope twisting rana but AJ caught him and delivered the Styles Clash to retain.  This was a good match that should have stolen the show.

One match everyone seemed down on but which I liked pretty well was Bayley vs. Ember Moon.  It wasn't the most memorable match but both of them worked hard and there were some fun athletic spots, like Moon's handspring elbow in the corner.  At the ten-minute mark Ember climbed to the top rope, but Bayley cut her off and hit the Bayley-to-Belly from the second rope to retain.  Again, nothing incredible here but I liked it fine.

My least favorite match of the night was of course the Kevin Owens-Shane McMahon nonsense, a recap of a feud from two years earlier that wasn't good the first time around.  Before the match started Shane announced Elias as the guest enforcer on the outside.  This allowed Elias to distract both Owens and the real referee, giving Shane a reason to last as long as he did.  The action here was pretty generic, with Shane forgoing his usual high spots in favor of his usual bad-looking punching.  Elias at one point slid a chair into the ring to tempt Owens into getting himself disqualified.  Owens came off as way too easily distracted (as babyfaces often do in WWE).  After hitting a top rope senton and frog splash, Owens went for the pin but Elias pulled the referee out.   Owens dove on Elias but also knocked out the referee.  Owens bludgeoned Elias with the chair and was about to use it on Shane when the ref recovered.  Owens gave the ref the chair and then low-blowed Shane while the ref wasn't looking, followed by a Stunner for the win.  This was inoffensive but I didn't care whatsoever about this feud, or Shane, or Elias.  It's inexcusable that Shane had a match on this show and Shinsuke Nakamura did not (nor did the planned Roman Reigns-Daniel Bryan match ever happen).  I guess if this is the worst match of the night that's a win?

The surprise hit of the night for me was Charlotte Flair vs. Trish Stratus.  For someone who hadn't wrestled a singles match in eight years, Trish looked pretty great; she definitely did her homework getting ready for this.  The bout went long and took some time to win over the crowd, but by the end they were into everything.  I was actually surprised how much these two did.  Charlotte was a great heel as usual, trash talking almost the entire match.  The spot that really turned the crowd around was Trish going for her Stratusphere hurricanrana in the corner.  Charlotte held her legs but Trish pulled herself up to the top rope and finally got the rana, which looked great.  Near the end of the match Trish put the Figure Eight on Charlotte for a near tapout, Charlotte got to the ropes, and Trish hit Stratusfaction for a very close nearfall.  After a running boot, Charlotte finally applied her own Figure Eight for the tapout.  This was shockingly the best match up to this point.  If this was Trish's swan song, she went out in style. 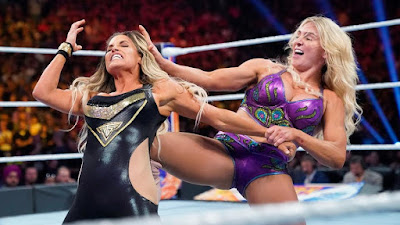 Another fairly underwhelming match was Kofi Kingston vs. Randy Orton.  The story going into this was quality - ten years ago Kofi was in line for a push, he feuded with Randy, Randy used his backstage clout to put the kibosh on it, and Kofi languished in the midcard for years thereafter.  So the narrative of Kofi wanting to prove to Orton that his career sabotage was unjustified was a compelling reason to have the match.  Unfortunately this is Randy Orton we're talking about, so the match was a little flat.  Aside from high spots like Orton's top rope superplex and Kofi's trust-fall dive to the floor, the match lacked the urgency it needed, especially given the personal nature of the feud.  Things picked up toward the end, and Kofi went for a top rope dive but Orton countered with an RKO.  Orton was too exhausted to make the cover and Kofi rolled out of the ring.  On the outside Orton taunted Kofi's family sitting at ringside, and got so caught up in the moment that he didn't hear the referee counting both men out.  The crowd hated this finish, but an enraged Kofi grabbed a kendo stick and beat Orton down with it.  This match was just okay, but a WWE Title match at SummerSlam needs to be more.
The death spot went to Finn Balor vs. the debuting Fiend character, and to both men's credit (and the production team's), this won over the crowd big time.  The Fiend's ring entrance was creative, visually unique, and suitably scary.  Bray Wyatt sported his Slipknot-esque mask and Balor sold it like he was fighting the devil.  Wyatt dominated the match aside from a late comeback by Balor, who hit a slingblade and corner dropkick, but the Coup de Grace was countered by Wyatt's mandible claw for the win.  At the time this was exactly what it needed to be: a compelling reinvention of one of the most poorly used heels in recent years.  Of course we all know what happened next; the company completely ruined the Fiend character by pushing him into the title picture too fast, had him come up short in his first title match with Seth Rollins (via maybe the worst-booked finish of all time), had him win the title in his second attempt, and then fed him to Goldberg to irreparably damage this character.  WWE could fuck up scrambled eggs. 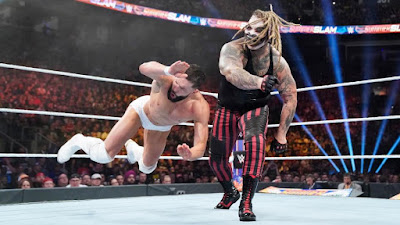 The main event felt like a correction from both WrestleMania and 2018's SummerSlam.  Both matches were meant to be a coronation for the company's top babyface, and both failed pretty egregiously in that regard.  Fortunately this match didn't.  This was the match Brock and Seth should've had in April to put Seth over as the face of the company.  Brock went after Seth's injured ribs immediately, crushing him in the corner, and then attempted a German suplex.  Seth backflipped and landed on his feet, and stunned Brock with a Curb Stomp for a nearfall.  The crowd popped huge for this and I immediately became invested.  Brock went for another German and Seth repeated the counter, then superkicked Brock twice.  Seth went for another Curb Stomp and Brock reversed it into an F5 but was too hurt to follow up.  Brock dominated Seth for several minutes, hitting multiple suplexes, but Seth kept slipping out and staying alive.  Seth hit two topes through the ropes but Brock caught him the third time and rammed him into the post.  Brock cleared off the German announce table (German announce table, German suplexes, META) but Seth superkicked him on to the table and hit a nasty-looking frog splash from the top rope.  "Holy shit" chants ensued.  Back in the ring, Seth hit another Curb Stomp for a near-fall, went for a third, but Brock lifted him for an F5.  Seth wriggled free and hit the Stomp to regain the Universal Title.  This was exactly the decisive win the company needed to give Seth to establish him as The Guy.  Where the WrestleMania match came off as a fluke, this was a full investment in Seth Rollins.  Brock hit no offense after the table spot.  This was about as conclusive a win over Brock Lesnar as anyone's gotten since he came back in 2012.  This match was excellent, action-packed, dramatic, and one of the more satisfying main roster main events of the year.  Of course WWE completely fucked Seth over a second time by hotshotting The Fiend into a title feud, making Seth act terrified of his heel opponent, and clusterfucking their entire rivalry.  WWE could fuck up not only scrambled eggs, but also toast. 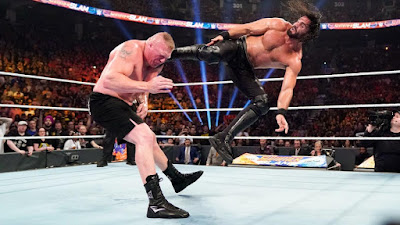 So SummerSlam 2019 wasn't an all-time great show or anything, but it had been nearly a year since I could say I unequivocally enjoyed a WWE main roster PPV.  It didn't go on forever, there was nothing offensive, multiple matches delivered, the main event was great, and Seth Rollins was finally being presented as a deserving top champion, for the time being at least.  As usual WWE's follow-through was rancid, but for one night they got a lot of things right.