This SummerSlam was frustratingly inconsistent and suffered from repetitive booking and a nonsensical match order.  It was a middling show, despite a few of the bouts being quite good.  Things oddly peaked in the middle of the PPV, and although it never dragged like the previous two SummerSlams, by the end I walked away mildly unsatisfied.

After the disdainful crowd response Brock-Roman II got at WrestleMania 34, common sense dictated this rematch should be kept short to prevent the audience from shitting all over it.  While that was probably still the right move, what a nothing match this was.  First off, Braun Strowman interrupted the ring introductions to announce that unlike other MITB holders, he wasn't a coward who would cash in when the champ's back is turned.  "Cool" I thought, "he's adding himself to the match like a monster babyface realistically would."  Nope.  He just stated that he's cashing in after the match.  So how's that really any different than cashing in when the guy's back is turned?  You're still a fresh challenger facing an exhausted champion.  How is that not cowardly?  It turned out to be a moot point anyway, but really think about this for a second.  This is why Money in the Bank needs to go away; no one really gets elevated by holding the briefcase anymore. 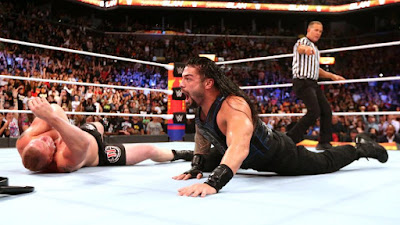 Anyway, Brock vs. Goldberg in 2017 proved you can have a red-hot sub-five-minute match that is memorable and that the crowd will eat up.  But after the first thirty seconds of Punch-Spear, this match was a buncha fluff.  Brock got a guillotine choke, hit a few suplexes, attacked Braun Strowman with a chair to prevent him from cashing in, and then got speared out of nowhere to lose the belt.  The indestructible Brock Lesnar, who earlier had taken three SuperPunches and two spears but still had it in him to counter with a guillotine choke, got pinned from one spear after controlling the second half of the match.  This was the most anticlimactic title change since Cena beat JBL in 2005, and nowhere near as good as either WrestleMania match between these two.  Strowman was clearly put out there to prevent "We Want Strowman" chants and get the crowd hyped for a possible cash-in, but what does it say about your main event when you have to trick your audience into not booing it?  This more or less sucked and illustrated why people in 2018 and beyond were and are tired of Brock.  Roman had to relinquish the title only two months later when his leukemia relapsed, thus further diminishing what should have been the culmination of an emotional journey.
This briefest of main events wouldn't have been such an issue except that it followed the second-most hyped match, which only went four minutes.  Ronda Rousey made short work of Alexa Bliss, as expected, and I was fine with how one-sided it was, but on a PPV with three squashes and a six-minute main event, this was placed way too late on the card.  Put this at the halfway point and the squash gets a big pop.  Ronda looked good as always, and Alexa's double-jointed elbows came into play for a unique armbar spot.   One cross armbreaker later, and Ronda was now the RAW Women's Champ, immediately elevating the title's profile, and beginning the journey toward the first-ever women's WrestleMania main event.  Unfortunately after Ronda's departure in 2019 the women's division suffered greatly. 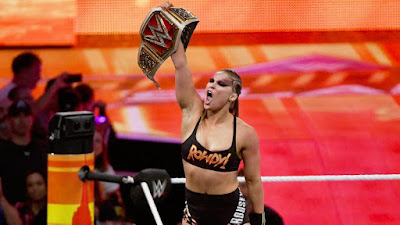 Alright, now that I've gotten the double main event out of the way let's backtrack.

The opening match was Dolph Ziggler vs. Seth Rollins for the Intercontinental Title, which was significantly better than their Iron Man match a month prior  It took a while to get going but the final five minutes were full of big moves and nearfalls, and the crowd became really engaged by the end.  Ambrose and McIntyre on the outside teased physical involvement several times before Ambrose had had enough and DDTd Drew on the floor.  Seth teased being distracted by this, but when Dolph went for a superkick, Seth beat him to the punch and followed it up with a Curb Stomp for the title win.  Ambrose would of course turn heel two months later and the company totally botched their feud before Ambrose left for greener pastures. 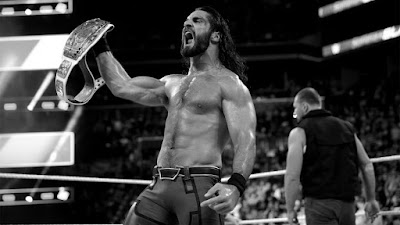 The second match was also high-energy as The New Day challenged Harper & Rowan for the Smackdown Tag belts.  This was non-stop action, with lots of outside brawling, including a couple scary-looking overhead suplexes by Big E.  This reached a climactic pitch by the time New Day went for their finisher, but they, and the momentum of the match, were stopped by Rowan using the Bludgeon Brothers' hammer for the DQ.  So a very enjoyable tag title match was needlessly booked to a DQ finish, despite there being a much more important DQ finish later in the show.  Stupid.  This could've been a very good match.

The first of the aforementioned squashes was next, as Braun Strowman murdered Kevin Owens in two minutes.  Owens got nary a bit of offense here and bounced around like a basketball, taking flip-bumps on the floor and a chokeslam on the entrance ramp before falling to a powerslam.  I get that Braun needs to be booked like a monster, but who the hell did Owens piss off to get completely killed like this?  He was only one of the most over heels in the company.  Fuckin' hell with these people.

Smackdown Women's Champ Carmella had her best-ever match, defending against Charlotte and Becky Lynch (and yes, they were the reason this match was good, not so much 'Mella).  The story was Becky as the underdog babyface who hasn't gotten a proper title shot in ages, while Charlotte thwarted her at seemingly every turn and Carmella played the two against each other.  The character dynamics made up for the bout's occasional mechanical shortcomings, and the second half of this was very solid.  After loads of near-falls Becky caught Carmella in Disarm Her, only for Charlotte to come from behind with Natural Selection for the win.  The two friends hugged after the match but then Becky turned on Charlotte, getting a huge pop from the crowd.  Becky was clearly positioned as the heel here but the fans would have none of that, as she'd quickly become the biggest anti-hero since Steve Austin before reaching a career pinnacle as the newly crowned babyface champion to close out WrestleMania 35.

I dunno in what universe it makes any sense for the WWE Title match to go fifth out of ten, but that's what they did here.  Fuck's sake.  Still, AJ Styles vs. Samoa Joe was for me the match of the night, starting fairly slow but building in intricacy and intensity throughout.  The crowd went right along for the ride too.  Both guys broke out their signature offense while still leaving enough for a rematch down the line.  Late in the bout the action spilled to the outside, where Joe rammed AJ into the steps (cutting his forehead) and then took the mic to taunt AJ's wife and daughter who were at ringside.  AJ snapped, tackling Joe through the ring barricade and bludgeoning him with a chair for the disqualification.  Now, in a vacuum this DQ finish was fine.  It was born out of the storyline to set up a rematch.  But coming three matches after another title match DQ, this felt excessive, not to mention this is was third AJ Styles PPV match in 2018 that ended in a non-finish.  It's like the people "producing" these matches didn't pay attention to what came before.  Regardless, this was a really good match. 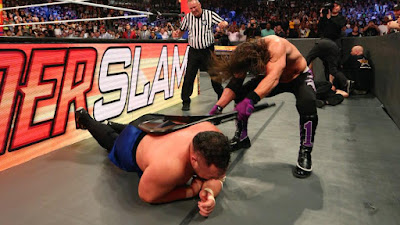 My other most anticipated match was next as we finally got to see Daniel Bryan vs. The Miz.  And the match was very good in terms of execution but suffered from a few intangibles.  First, it should never have followed AJ vs. Joe, one of the best-received matches of the night.  Since WWE crowds have been conditioned to buffer matches, they should have put one between the two bouts the diehards were really excited about.  Second, Bryan's return was handled so poorly post-WrestleMania the audience investment in him suffered until he turned heel that fall.  This is was the result of him being saddled with Big Cass for three PPVs and then a pointless reunion with Kane.  So this match didn't have nearly the crowd involvement it should have, despite being very good.  Both guys worked hard and Bryan ramped up the stiffness with hard slaps and strikes; both guys had welts on their chests by the end.  Finally the fight moved to the outside and Maryse (also at ringside with her kid) snuck Miz some brass knux, which he used to knock Bryan out and get the cheap win.  This was the right finish here, especially since Bryan hadn't decided whether he was staying with the company or not.  At any rate, this was probably the second-best match of the night and would maybe have stolen the show had the crowd been hotter. 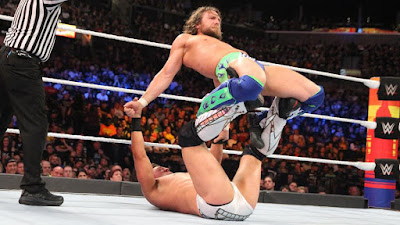 So rather than put the next squash match between the two big ones, they saved it for AFTER Bryan-Miz.  Umm, okay.  Finn Balor vs. Baron Corbin was mercifully short and marked the return of The Demon King (I'm not sure why he hadn't used that gimmick in a year considering how over it is - self-fulfilling prophecy maybe?).  The audience loved his entrance and his completely one-sided 90-second win.  Sadly this wasn't followed up with any meaningful use of Finn and he continued languishing in midcard hell before returning to NXT for a while.

And finally we had Shinsuke Nakamura vs. Jeff Hardy for the US Title, another match that could've gone between AJ-Joe and Bryan-Miz.  The crowd didn't care much about this at all, but it was a solid 11-minute match and both guys worked hard.  Jeff probably worked TOO hard, given that he did a swanton on the friggin' apron.  If he's still walking at 50 I'll be shocked.  Nak and Jeff exchanged some good taunts and the action was fairly crisp.  After the missed swanton Nak retained with a Kinshasa, then Randy Orton came out and teased an attack on Jeff but didn't follow through on it.  This led to a Hardy-Orton feud which of course left Nakamura as the odd man out.

So yeah, SummerSlam 2018 had some good things about it, but the match order made no sense at all, they doubled up the DQ ending, and there were three squash matches.  Oh, and the last four bouts combined only went 22 minutes.  Twenty-two minutes.  COMBINED.  Who assembled this show?  This felt like listening to a concept album on Shuffle.  On the bright side, at least it didn't feel days long like most WWE PPVs of the last few years.  But the fact that the two biggest matches went a cumulative ten minutes and went on 9th and 10th made this show feel like a Bischoff Era WCW PPV.  I don't understand what this company is doing anymore.

Best Match: AJ Styles vs. Samoa Joe
Worst Match: Braun Strowman vs. Kevin Owens
What I'd Change: Have Harper & Rowan get a cheap win so the AJ disqualification didn't feel repetitive, put AJ vs. Joe late on the show, put Rousey's match earlier, have Bryan-Miz follow a buffer match, and give the main event a climactic ending.
Most Disappointing Match: Despite my already low expectations, the main event.  This was inexcusibly uneventful considering how long Roman's coronation has been delayed.
Most Pleasant Surprise: That Miz-Bryan got more time than anything else
Overall Rating: 7/10
Better than WrestleMania 34?: Nope.

Posted by Justin Enuffa Ballard at 9:06 AM