AEW is back with another special Dynamite episode, this time it's Fight for the Fallen! 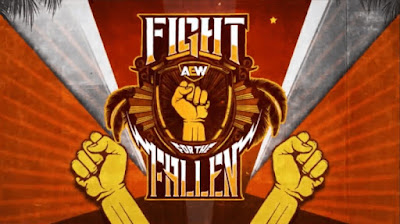 The two-night Fyter Fest is in the books and both shows were quite enjoyable.  I liked Night 1 better, with its stacked lineup of mostly championship matches (the Omega/Page-Best Friends main event was probably the best match on either show and I also loved the MJF/Wardlow-Jurassic Express opener) but Night 2 had some memorable bouts as well (the spectacular 8-man match and the Jericho-Cassidy main event).  But since Jon Moxley-Brian Cage had to be postponed due to Moxley's wife Renee Young contracting COVID, here we are with another special show.  Five matches have been announced, two of which are title bouts.  So let's get into it. 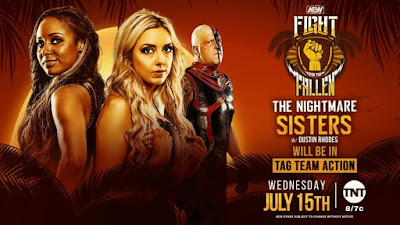 Evidently we'll see Brandi Rhodes and Allie in action against an unnamed team.  I assume this will be like Nyla Rose's match last week, where "TBA" just means "jobbers" instead of the usual "mystery team that ends up winning."  I'm guessing this will be a short showcase match.

The Elite vs. Jurassic Express 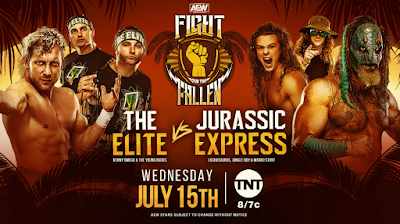 This should be tons of fun, as Kenny and the Bucks face all three Jurassic members.  Jungle Boy and Luchasaurus are coming off a win over MJF and Wardlow, but I imagine Marko Stunt takes the pin here.  This'll be a crazy match. 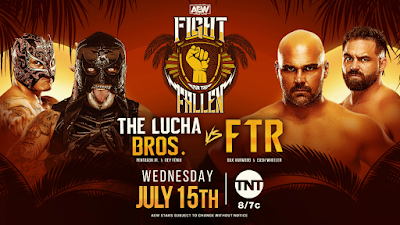 I predict this steals the show.  Both teams are fantastic; FTR is all about old-school tag action, the Luchas are all about dazzling folks.  The clash of styles will be fascinating.  The company is clearly building to FTR vs. The Bucks, probably at All Out, so I see them taking this one.  Plus the Luchas and Butcher/Blade won last week. 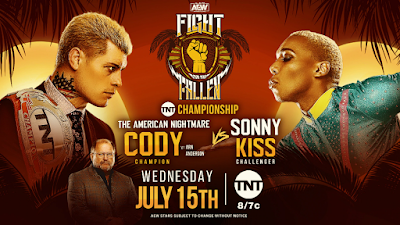 I don't believe I've seen Sonny Kiss in-ring at all except for his run-in last week.  I will say his shooting star press is pretty amazing.  This will be another clash of styles, with Cody's old-school fundamentals vs. Sonny's high-wire athletics.  Cody is obviously retaining here but it should be a fun little match. 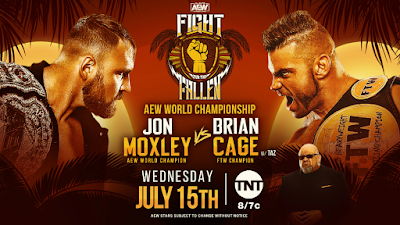 This will be a brutal brawl as most of Moxley's bouts are.  Cage is a super-athletic big man with innovative offense, which should help make this match stand out from the usual hardcore-style stuff.  I see this going all over the arena like Moxley-Lee did, with plenty of car wreck spots.  No reason to take the belt off Moxley at this point, so he's retaining.


That's the lineup.  Should be another fun show.  I've really been enjoying AEW's product, particularly in 2020.  The weekly shows have the spontaneity of the old Monday Night War era, and the PPVs have been incredible.  They don't always get everything right, but AEW has made North American wrestling fun again.

Posted by Justin Enuffa Ballard at 9:27 AM