Well this is gonna be a short one today since NJPW Dominion's full card still hasn't been announced.  Only three matches as of this moment, which is sad considering Dominion is normally the second-biggest show of the year for them. 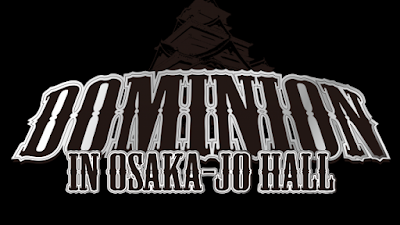 Well it's great to finally have NJPW back after a four-month COVID absence.  I've been enjoying the delayed New Japan Cup and it's actually refreshing to only have two-hour shows to keep track of, with two to four tournament matches per show, plus one to three filler tag bouts.  If nothing else it's been pretty easy to keep on top of.  The matches themselves have been mostly very good, with a few great ones.  The tourney stealer for me has been Hiromu Takahashi, who despite being the Jr. champ made it deep into the tournament, defeating Honma, Yano and Ishii (in a fantastic match) before falling to the mighty Okada (in the best match of the tourney so far).  I was actually hoping to see the Timebomb win the whole thing and face Naito on Sunday, thus delivering the planned Anniversary Show match.  But alas.  Anyway let's pick the winners for the four big matches this weekend (I'm including the New Japan Cup final). 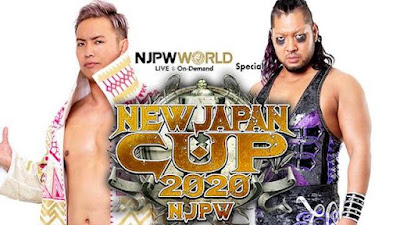 It's no surprise that Okada made the finals, being the biggest star in the company and the best in the goddamn world.  That said, I think it's too soon for a Naito-Okada rematch, particularly since they can't sell out any buildings right now.  Furthermore we're effectively still in March thanks to all the event cancellations.  Don't forget, the New Japan Cup winner was supposed to face Naito on March 31 at Sakura Genesis.  So clearly Okada wasn't slated to win the tournament then; it would've been a case of them blowing their wad way too early.  Thus, Evil takes the tournament.  Evil's push has been kinda sudden, but he's shown that old killer instinct in this tournament, cheating to beat even his best friend Sanada in the semis (I found it intriguing that LIJ took three of the four slots).  I think we'll see him do more of that against his mentor on Sunday as well, which should make for an interesting dynamic. 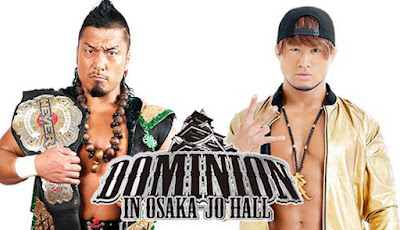 The tournament match between these two was pretty great, and obviously went the way it did to set up this title bout.  With more time alotted these two could steal the show.  It's Shingo's brute force vs. Sho's powerful athletics.  I wonder if Sho will break off from his tag team with Yoh and focus more on singles action going forward.  He's got all the tools to be a helluva singles star.  But it's not his time yet to win the NEVER belt.  Shingo will retain and avenge his tourney loss. 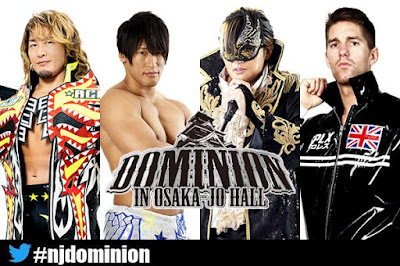 I kinda love that Tanahashi and Ibushi won the tag belts.  It has a great "superteam" vibe about it.  That said, I don't think their reign was destined to be a long one.  Ibushi has some singles losses to make up for, coming up short twice at the Dome.  Unfortunately one of his enemies is out of the country during COVID; I'm not sure when we'll see Jay White return to Japan, but he's due some receipts courtesy of Ibushi.  By the way, if you'd told me that of these four guys Taichi would make it the farthest in the Cup tourney, I'd have punched you right in the mouth.  That's insanity.  Anyway I think Suzuki-Gun wins a tainted victory here to capture the belts. 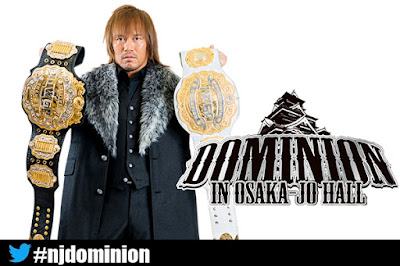 As I said, I think Evil wins the tournament to get the shot here.  It will be the two original LIJ members going head-to-head, in a match full of mind games and rulebreaking.  Evil will strain if not outright destroy their friendship with his win-at-all-costs mindset.  But he'll come up short.  Naito just won these titles in January and lost four months of defenses.  It's too soon to take either of them off him.  I wonder though, will he ever defend them individually?  This dual championship thing can't last forever, right?  Also my prediction stands even if it's Okada who challenges here.  Naito should keep the belts longer, regardless who the challenger is.


So there's the known lineup for Dominion.  I'd love to know what Okada and Hiromu will be doing on Sunday.  Will there be a Jr. Title match?  Will Okada be shoved into a tag bout?  I hope the rest of the show isn't just filler.  That's hardly worthy of Dominion.


Posted by Justin Enuffa Ballard at 11:24 AM